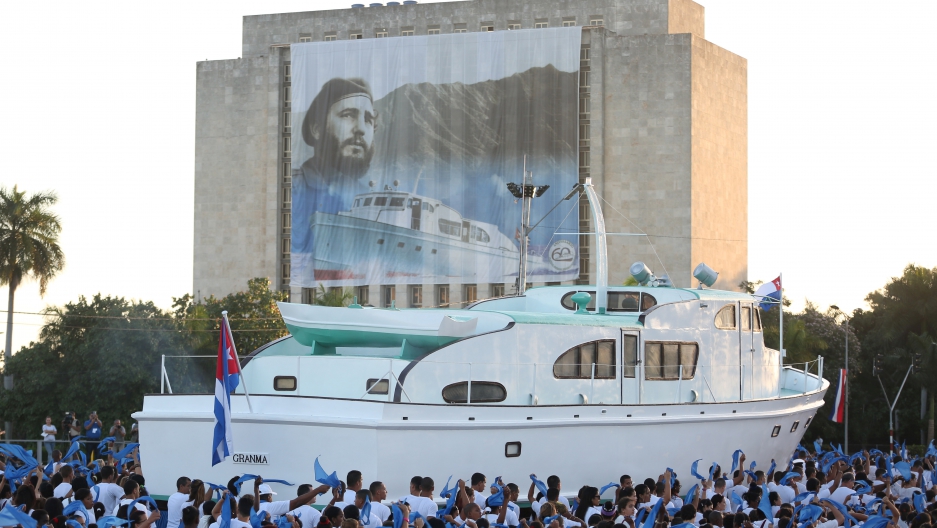 An image of late Cuban President Fidel Castro hangs on a building as a replica of the Granma yacht passes by during a march to mark the Armed Forces Day and commemorate the landing of the Granma, which brought the Castro brothers, Ernesto "Che" Guevara and others from Mexico to Cuba to start the revolution in 1959, in Havana, Cuba, Jan. 2, 2017.
Credit:

For years, opponents of Cuba’s socialist revolution pegged the system’s downfall to the inevitable death of its leader, Fidel Castro. Yet, months after Castro’s death, there have been no major protests on the streets of Havana, no popular uprising against the ruling Communist Party.

As Gladys Esther Marta Luís can attest. She's a manicurist who is currently unemployed. For her, things have continued on much like they were before. Since the former president's death in November, she said, “I don’t see any changes,” adding, “Life seems the same to me.”

But change — especially overnight — was unlikely, anyway, said Cuban novelist, Laidi Fernández de Juan. “Fidel had been out of power for almost 10 years,” she said.

In the last decade, Castro's public appearances became rarer and rarer. However, Castro has not, by any means, been forgotten, Fernández said. Cuban state media regularly touts the late leader’s legacy. And recently, a monument was dedicated to Castro in the city of Santiago de Cuba — a simple stone tomb.

“Whether or not you mourn the death of Comandante Fidel Castro, well, that depends on your perspective, your ideology,” Fernández added.

Singer Hugo Osle is someone who mourns Castro’s passing. Osle came of age in the years after the Cuban revolution. “This is very close to home for me,” he said. “Fidel was a very special angel here on Earth.”

So, as a musical director of a youth choir, Osle has found a way to honor Castro: His young singers perform traditional revolutionary songs in and around Havana. Their concert program is called “Fidel is Cuba.”

“None of us inside Cuba nor anyone outside Cuba can forget him,” said one of the singers, 25-year-old Osmel Fernández. He said Castro left a mark on his generation.

“Since we were young, the only leader we have known was Fidel, right?” Fernández said. “We grew up in this system.”

Not only that, but one reason that Cuban life has remained much the same, says Cuban writer, Dimas Castellanos, is that, its "very political" system runs deeper than just a single leader.

In fact, Castro made sure his socialist revolution would continue by handing power over to the one person he knew would continue what he started — his brother, Raul Castro, according to the Havana-based freelance journalist Oscar Alba.

“In the US and in Europe, people think that Cubans will now oppose Raul Castro’s government, but this is impossible,” Alba said. “You have to understand how things here work. Raul Castro controls the country the same way Fidel did.”

Yet Raul Castro has made some significant changes, including opening up the economy some, to allow people to run their own businesses. Even so, Alba doesn’t believe that bigger changes are on the way now that Fidel Castro is dead. “For that, you’ll have to wait … until Raul Castro leaves office,” Alba said.

But back to Gladys Esther Marta Luís, the out-of-work manicurist. In her one-room apartment in Central Havana, she was making dinner, recently — a simple meal with extra beans and rice, since she can't afford to buy much meat.

She says she was a fan of Castro's. “The most beautiful thing I can tell you is that I never wanted Fidel to die because, well, I’m a Fidelista.”

However, her love for Fidel Castro doesn’t extend automatically to his brother Raul Castro. No, for him, she has some pointed advice: “What we need now is more jobs and a wage rise because our salaries are very low compared to what things cost.”

She’s not so concerned about abandoning the political system, she’d just like to be able to buy meat for dinner more often.