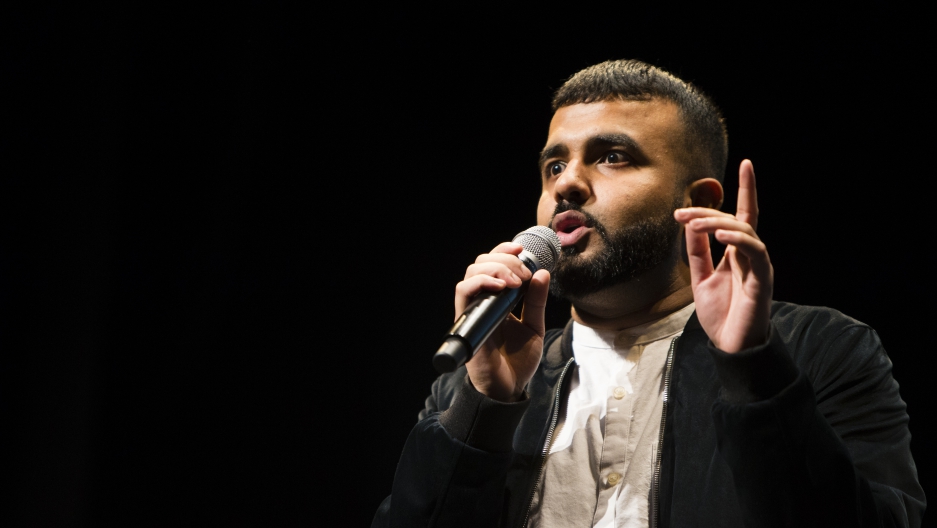 British-Muslim mental health activist Hussain Manawer won a trip aboard a commercial spacecraft. He will orbit above the planet next year. But he gets stopped by security all the time when he takes international flights.

Hussain Manawer thinks he is jinxed he gets stopped so often. He has been questioned at airports from LA to Macedonia, but jokes he doesn’t get stopped anymore because they all know him now.

“I’m just trying to figure out the best way in order to demolish this stigma that all Muslim people are terrorists,” he says.

Manawer is of Pakistani descent but grew up in Essex, England. And after a poem he wrote won him a space flight, he received widespread attention when during a speech in Thailand he said, “My name is Hussain Manawer, and I am not a terrorist.” Manawer says he said it in response to the many racial profiling incidences he has experienced.

“I gave up,” he says, when asked if he’s kept track of all the times he’s been detained and questioned. “It is absolutely insane the amount of times I’ve been stopped.”

The contest to win space travel was held by Kruger Cowne’s Rising Star program for 18 to 30-year-olds. Thirty thousand participants from more than 90 countries competed for a spot on an XCOR Aerospace Lynx commercial spacecraft, due to lift off in 2018.

The winning entry was a poem entitled “My name is Hussain.” It is a three-minute spoken word piece that starts off as a suicide letter from a boy to his mother, but it's later revealed the mother is actually Mother Nature.

Here's Manawer performing it in front of the judges and a live audience:

“That is what I do, I’m a poet. I write poetry for the betterment of human life, for social and emotional learning. That’s where space came into it. I only wanted to enter this competition to be taken more seriously with my work," says Manawer.

His YouTube Channel, Hussain's House, features his spoken word performances and funny videos. But his focus is always mental health, and the stigma around it.

Since winning the contest, Manawer, 26, has been giving talks to raise awareness on the subject. He became passionate about the issue after a friend was diagnosed with depression, but felt too uncomfortable disclosing it to his family. Manawer now speaks out regularly about mental health and hopes his trip to space will allow him more opportunities to bring it up.

“I’m very passionate about mental health. I believe we are in a beautiful time, growing up in this day and age, however I do think we are equally connected and disconnected simultaneously. And what I mean by that is that it’s easier to connect with someone across the world than across the room.”

Manawer says he never dreamed of going to space, and while he’s grateful for the opportunity he’s still not sure if space travel is for him.

“You know what? If am being honest I don’t actually want to go ... though I am obviously going to go forward with it.”