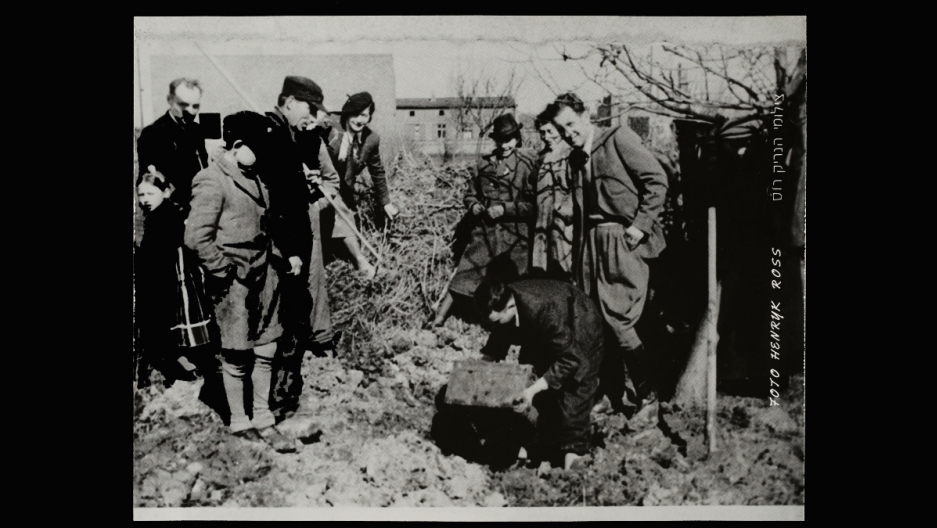 © Art Gallery of Ontario, 2016. Courtesy of the Museum of Fine Arts, Boston

In 1944, photographer Henryk Ross dug a hole in the ground and buried his negatives — more than 6,000 of them. Ross was the official photographer of the Jewish ghetto in Lodz, Poland. He also lived there.

“His intention was really to preserve this record of the tragedy that they were living through, not knowing at that point whether he would survive or not,” says Kristen Gresh, the Estrellita and Yousuf Karsh curator of photographs at the Museum of Fine Arts (MFA) in Boston.

Ross did survive. And in 1945 he returned to the emptied site to dig up his negatives. His rescued images are now being featured at "Memory Unearthed," a new exhibit at the MFA. About 3,000 of Ross’ negatives survived, according to Gresh.

“But many of the negatives were damaged by groundwater. They were stored in iron jars in an iron rimmed box,” she adds.

Officially he was supposed to be taking ID photos of residents and propaganda images of the ghetto’s factories for the ghetto’s administration, the Jewish Council. But he managed to scrimp and save extra film to take covert images of his own, capturing daily life of the ghetto with his 35 mm camera.

The first image you see in the exhibit is of Ross unearthing the iron box in 1945. It’s a surprisingly lighthearted photo. A group of people are gathered around a young Ross, who stands in a hole, with his suit pants rolled up to his calves, pulling his archive out of the ground. A man standing next to him is grinning for the camera. The happy scene is a startling juxtaposition when you begin to walk around the gallery and see the images held inside the box.

Like this photo, below, which at first seems innocuous — just a group of small children riding a wagon down a cobblestone street. One little boy is even grinning. But the date of the image is telling. In 1942, parents in the ghetto were ordered to hand over their children for deportation.

Many of Ross’ photos are deceptive in this way: Loaves of bread piled high up in a wagon, pots discarded on the road, a woman posing in a garden, a scarecrow with a star of David sewn onto its coat.

“He wasn’t allowed to leave the ghetto at all. It was really hermetically sealed,” says Gresh.

Lodz was the model ghetto, according to the Nazis. In 1939, the Jewish residents of the Polish city were forced to relocate to the old city center. Imagine an area of 1.6 square miles for around 160,000 people. Walls and wire fencing quickly went up, and by 1940 the Jews of Lodz were sealed off from the rest of the town. It was a city within a city.

Ross would hide his camera under his overcoat, pulling it out to snap quick shots when he could. He described his technique in a black and white film taken of him as an older man living in Israel.

Ross also credits his wife Stefania as his assistant. “She helped me,” he says in the film.

“[Stefania] was frequently on the lookout when he was taking the covert photographs and she was making sure that there was no [one] coming. Toward the end they managed to sneak into a space where there was a little hole in the wall that they could actually view the train station to photograph the deportation,” says Gresh.

Residents of the ghetto were frequently deported to the Chelmno and Auschwitz death camps by rail. The train station, however, was outside of the ghetto and inaccessible by residents. Ross was able to sneak to the station to take photos of the deportations.

The prison at Czarnecki Street, a rallying point before deportation. Henryk Ross (Polish, 1910-1991).

Ross’ deportation photos are some of his most harrowing images: Men and women marching toward the train station, carrying suitcases, pots, pans, whatever they can. Guards watch as a group of deportees are pushed into a cattle car.

These photos were actually used as evidence in the 1961 trial of the Nazi Adolph Eichmann. Ross himself testified at the trial.

“There was a hole in the plank and I photographed through that hole,” he explained at the trial.

In 1944, the Nazis received orders to liquidate the entire ghetto. Only a few residents were left behind to clean out the buildings. Ross and his wife were among the cleaners, and some of the last people in the ghetto when the Soviets liberated Lodz in 1945.

They immigrated to Israel in 1950 and Ross brought his box of negatives with him. And for the rest of his life he could never really get far away from them or his memories.

For 40 years Ross revisited his images again and again. He published a book of them, created collages, and even attempted to number them all. But after 1944 he never took another photograph.

You can see Ross' photos at the Museum of Fine Arts, Boston through July, 2017.