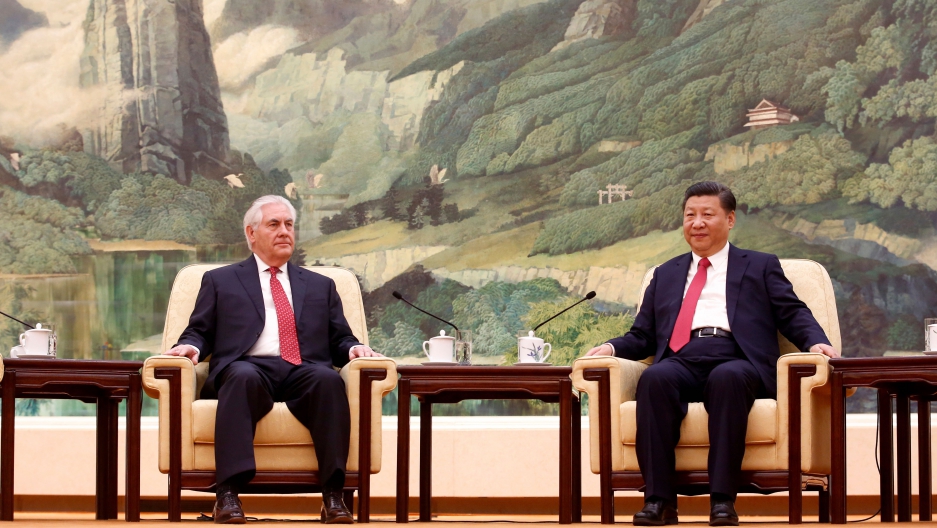 China's President Xi Jinping meets US State of Secretary Rex Tillerson at the Great Hall of the People in Beijing, on March 19, 2017.

A couple days earlier, Tillerson called for an end to former President Barack Obama's "strategic patience" policy — waiting for economic sanctions to force North Korea to denuclearize — and the new secretary of state suggested that the US might even engage in pre-emptive action against North Korea.

"Let me be very clear: The policy of strategic patience has ended," Secretary Tillerson said in Seoul, South Korea, late last week. "We're exploring a new range of diplomatic, security and economic measures — all options are on the table."

The relationship between the United States and North Korea is complicated, and it's only grown more contentious as North Korea has continued to carry out nuclear tests.

Ambassador Christopher Hill, who led the US delegation to the six-party talks on North Korea’s nuclear program while serving as the assistant secretary of state for East Asian and Pacific affairs from 2005 to 2009, says the West should be concerned that North Korea may have a nuclear device that could go onto the top of a missile.

“I think direct diplomacy with North Korea, either through six parties or one-on-one, I think it’s looking very difficult because it’s pretty clear that the North Koreans have no intention of giving up their nuclear weapons right now,” Hill says. “I think the problem is the diplomacy cannot just be focused on North Korea, the diplomacy needs to be focused on other countries in the region, notably China.”

Ambassador Hill says the United States, China and other nations should be actively working together to apply additional pressure on North Korea.

“The one thing we can’t do is wait around and wait for a better day, and that’s what strategic patience was,” Hill says. “Secretary Tillerson made very clear that we can’t do more of that because this problem is coming down the tracks right at us, and no amount of patience is going to dissuade it.”

Though he says he is not “blaming the Obama administration” for its policy of strategic patience, he says it has clearly not worked, adding that a new approach is now needed.

“The notion that somehow you could just say, ‘Well, we need to be patient, they’ll come around,’ the problem was, we weren’t really getting anywhere,” he says. “We didn’t have really any new approaches with China, it was sort of desultory conversations with them every few weeks to say, ‘Hey, you’ve ‘gotta do more,’ and the Chinese say, ‘Hey, you’ve got to do more.’ Nothing was really sort of moving ahead on the China relationship, although in fairness to the Obama administration, the fact that China recently decided to stop buying North Korean coal, which is a big thing that hurt North Korea, that’s an outcome of President Obama’s diplomacy.”

However, some cautioned Tillerson after his remarks. The US “should leave open the door to negotiations,” wrote the Los Angeles Times in an editorial. “It’s important that the president and the secretary of state not engage in what sounds like saber-rattling.”

“North Korea has a mountainous, Afghanistan-like geography and road network,” he wrote, but its forces “represent a more numerous, much better-trained, much better-armed version of the Taliban.”

China has been reluctant to ramp up pressure on North Korea because the nation is fearful that too much strain on the North could lead to its collapse, which could look like a defeat for China and a victory for the United States, Hill says. Though the US appears to be getting more aggressive, Hill argues that the Trump administration is not taking on a wholly new approach.

“The term that ‘everything’s on the table’ is kind of a typical American term — President Obama used it all the time on Iran — but it’s been interpreted to mean that [the Trump administration] would look at other possibilities, including the idea of attacking North Korea in a pre-emptive mode,” Hill says.

Though pre-emptively striking North Korean targets may sound simple for one of the world’s largest militaries, Hill says that even combative approaches that “sound simple and sound clean” can be fraught with danger.

“If you’re going to go that route, you have to do it together with the South Koreans, there has to be a great deal of effort to protect that civilian population. It’s quite an undertaking,” he says. “No one should think there’s some easy option out there that we simply haven’t been able to look at. President Trump said a few weeks ago, ‘Gee, I never thought health care was this complicated.’ Well, wait until he gets a load of the North Korean nuclear problem.”