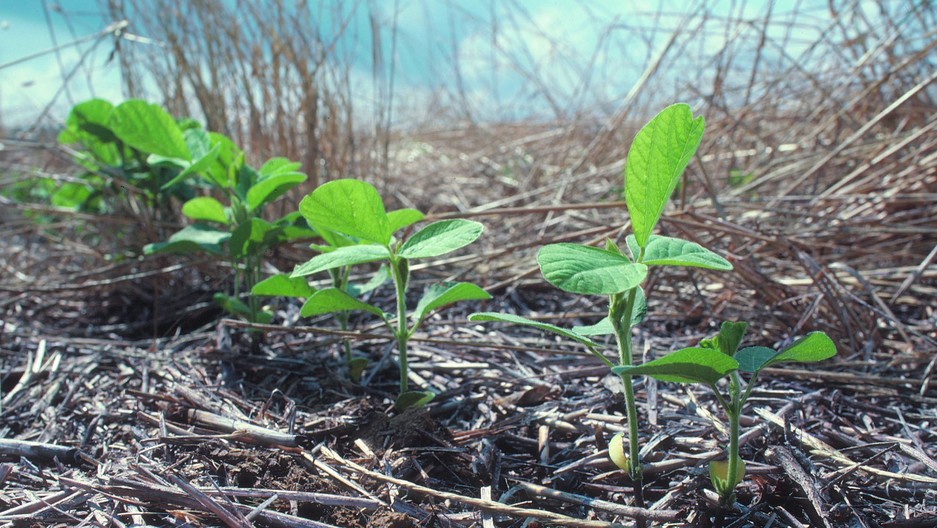 No-till farming is exemplified here, where young soybean plants grow in the residue of a wheat crop.

US Department of Agriculture/CC BY 2.0 (image cropped)

At a time when many modern farmers face problems like soil erosion, nutrient loss and drought, the black dirt on Doug Palen’s family farm is a field apart: Its health and texture just keep improving.

“Its organic matter continues to rise, and it just continues to perform even better than it did,” Palen says.

Palen’s soil secret? He doesn’t till the fields on his Glen Elder, Kansas, farm. Instead, when he plants each season, he seeds directly into the stubble of old, harvested crops. He also rotates crops across the fields; his farm’s website describes a rich mix of standard cash crops like wheat, corn, soybeans and sorghum, alternated with others like oats and sunflowers. And even after the harvest, he doesn’t leave the soil exposed.

“What we're constantly trying to do is mimic the native system, the natural system where there's always something growing,” Palen explains. “Always trying to 'armor' the soil, [as] we often talk about, is to protect it with the residues on the surface.”

Armor may sound like a strange thing for dirt to need — but the soil is precious, and it’s being washed or wind whipped out of fields across the country.

“Soil actually takes about 500 years to create a single inch,” says Miriam Horn, a writer at the Environmental Defense Fund and author of "Rancher, Farmer, Fisherman: Conservation Heroes of the American Heartland."

"It's a mix of eroded rock and organic matter. And … we still are losing in the US close to 2 billion tons of topsoil every year. In some parts of the country, that's the equivalent of about a foot or more of topsoil gone."

Palen, a fourth-generation farmer, began using no-till practices after he took over the family farm in 1993. “It looked like a good system to embark on, and one that would afford a young producer a lot of opportunities,” he says. And so far, it has.

He’s a founding board member of a nonprofit, No-till on the Plains, which educates farmers about no-till practices. And he’s seeing the benefits on his own farm. For instance, while water is a premium in the plains of Kansas — even more so with recent drought — Palen says his unirrigated farm does just fine.

“In my area, everything is done on dry land,” he says. “We don't have irrigation or natural water surface or subsurface to do so. Everything I get is what Mother Nature gives me, and so that's what we work with, and we get along well.”

“It stays very porous, and so the water permeates very deep in the soil,” she explains. “There isn't nearly as much evaporation or water loss, and so [no-till farmers] are much more resilient to these extremes of weather.”

But she adds that for no-till farmers, the benefits go deeper than water. “They have to make many fewer tractor passes, which saves a lot on time and diesel, but they also frequently add much less nitrogen, because the crop rotations are doing that work. Nature is providing the nitrogen that they need.”

No-till farming can also counter what Horn describes as damage done to croplands by plowing. “A third of Earth’s organisms live in the soil,” she says, where they sustain photosynthesis, protect plants and humans from disease and hold nutrients and carbon in the soil. She likens a plow, twisting through the soil, to a tornado.

“You scramble these symbiotic communities, you collapse the homes that they live in and you overfeed them, really, with the residues,” she says, adding that in turn, bacteria feasting on the excess organic matter respire carbon dioxide. “So, you rob the soil of this vital nutrient, and you add it to the atmosphere, where it adds to climate change.”

While Horn says that the carbon held in American croplands “was pretty much stripped out by all the generations of plowing that followed on homesteading,” she’s hopeful about the radically simple practices of modern farmers like Palen and his colleagues. And they aren’t alone: The US Department of Agriculture estimates that in 2009, about 35.5 percent of the land growing our country’s major crops had no-till operations.

“If you farm well, if you leave the soil undisturbed, and you keep it protected in these ways and you care for your microbiome, you can start rebuilding that carbon back,” Horn says. “But this group of farmers that Doug is part of have seen the carbon levels in their soil building back up toward native prairie levels.”

This article is based on an interview that aired on PRI's Science Friday. You can read an excerpt of Miriam Horn’s book, "Rancher, Farmer, Fisherman: Conservation Heroes of the American Heartland," on the Science Friday website.