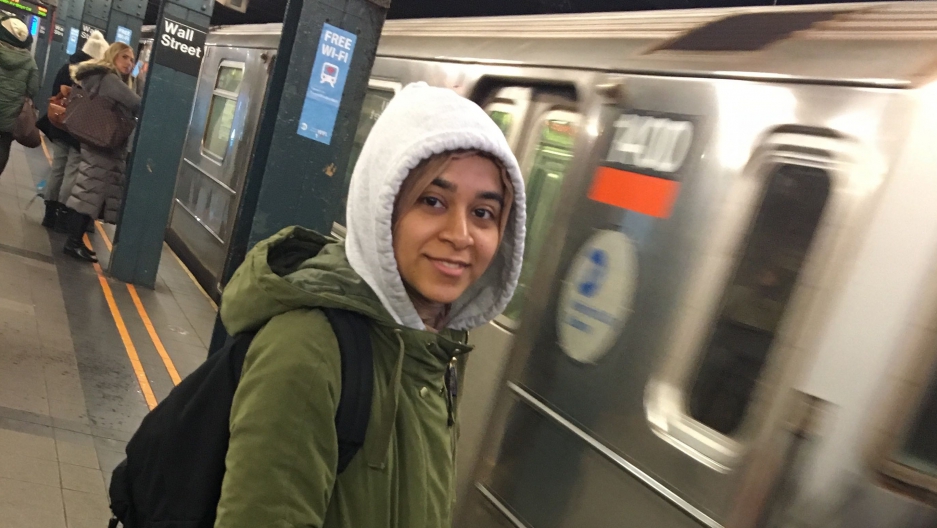 Safia Mahjebin loved to ride the train when she was younger. But doing so — during the school day — got her in trouble with her parents, who threatened to marry her off in Bangladesh. She was only 10, then.

When she was 10, Safia Mahjebin started skipping school. She used to ride the New York City subways, aimlessly. "I just love riding the train," she says. "You ride from one end to the other, and then you go back. And then you get out at a few stops and just explore ... some stations are really beautiful.”

For Mahjebin, this was a rare taste of freedom. She came from a very strict, tight-knit Bangladeshi Muslim community. Those train excursions, however, didn’t last long. Her parents found out. And that’s how, at such a young age, "My dad was like, ‘If we can’t control you, then we’re going to [get] you married in Bangladesh.' You know, as a kid back then, I remember staying quiet."

This was not an empty threat.

Mahjebin wants me to know that she is American and so is child marriage: "I’m a Brooklynite. You know, I grew up in the 'hood."

Usually, when you think of child marriage, you think of developing countries like Niger, where 78 percent of children are married by 18. Not here, not in Brooklyn.

I wanted to learn more, so I turned to Fraidy Reiss, who runs the nonprofit “Unchained At Last.”

At Unchained, "We’ve had clients from Jewish, Muslim and Christian backgrounds who are married as children. And they have come from every socioeconomic level, from both multigenerational American families as well as immigrant families," Reiss says.

In fact, her group estimates that "nearly a quarter-million children as young as 12 married in the US between 2000 and 2010."

Reiss and others are pushing hard to change laws across the country. Here, in New York state, there's a new piece of legislation that would raise the age of marriage consent from 14 to 17. Which Reiss says isn’t enough. Seventeen is, after all, still underage. And age, Reiss says, is only part of the problem. She says laws need to tackle all types of arranged marriage.

She speaks from experience. Reiss grew up an ultra-Orthodox Hasidic Jew. "My family arranged my marriage when I was 19. So, I was not a child even though I was a teenager. So, even at 19, I didn’t have agency. I didn’t have the ability to say no."

Reiss was technically an adult. But one who had spent her whole life not being allowed to drive, have money, have contact with the world outside her community. She was virtually a child.

Mahjebin, meanwhile, was able to resist an arranged marriage, but her refusal came at a steep cost. There was physical and verbal abuse, she says, not going into detail. "There were points where it became so unnecessarily unbearable, I was like ... If I got married, they’d just leave me alone."

In time, she started college on a scholarship. She practically slept on campus. The authorities were alerted, and they stepped in and offered her housing. Today, Mahjebin studies philosophy, with an emphasis on Islam.

It was Islam, she wants me to know, that set her free. “One of the reasons my parents couldn’t force me into getting married was that I knew my religion. And in my religion, it explicitly says that any marriage that is forced is null and void. And there have been cases in our tradition in which a girl has been married without her consent. And she went to the prophet Muhammad, peace be upon him, and asked him, ‘My parents forced me into marriage. Am I a married woman?’ And he said that marriage was not accepted.”

She quips, "It was because of my religion that I am still a single lady."

After our interview, Mahjebin takes me to the nearest subway stop. On a whim, she hops on with me for a very long ride uptown. She’s beaming.

She still loves it down here.