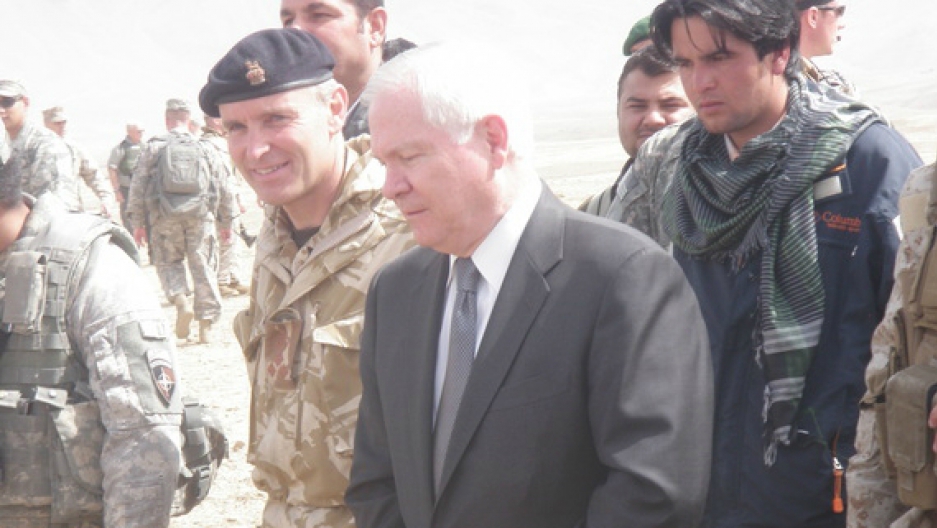 Afghan Ajmal Faqiri, wearing a scarf, served as a translator for former US Secretary of Defense Robert Gates

Ajmal Faqiri was 18 when he became an interpreter for the US military in Afghanistan. It was 2006 and the work was risky.

"We used to leave the base in the dark and go home to see our families," he recalls. "It was very dangerous."

Faqiri and his family received frequent death threats and eventually applied for a special visa to move to the United States. In 2009, the US set up a Special Immigrant Visa program to allow Afghan interpreters like Faqiri to come to the US. But there were never enough visas for all the interpreters who applied and the process took a long time. Faqiri waited three years before he, his wife and two children were able to move to US in 2013. The family moved to Virginia, where he now sells real estate.

The Obama administration extended the visa program annually and expanded the number of visas it made available to former Afghan translators in 2014. In fiscal years 2015 and 2016, a total of 7,000 special visas were authorized for principle applicants (and more for their family members). By the end of September, there were 1,650 remaining. In December, Congress reauthorized another 1,500 new visas for fiscal year 2017, but they're already running out and demand is high. More than 10,000 interpreters and their families have applied, hoping to find sanctuary in the United States.

The US Embassy in Kabul has reportedly begun turning away applicants.

Faqiri says he knows interpreters who have been killed by the Taliban because of their work for the US military. One was recently killed while waiting for his son's US visa, which had been delayed.

"While he was waiting for his son's visa he was captured and beheaded by the Taliban," Faqiri says.

Matt Zeller, a veteran of the war in Afghanistan, knows firsthand how dangerous and important the role of a military interpreter is. As a US army captain, he embedded with the Afghan army in 2008 and he served in the US military for 12 years. In 2013, he co-founded No One Left Behind, a Washington, DC-based non-profit that advocates on behalf of the US military's Afghan and Iraqi interpreters.

Interpreters during war are more important than weapons for soldiers, Zeller says. His interpreter, Janis Shinwari, saved his life during a firefight against the Taliban.

"He shot and killed two Taliban fighters who were about to shoot me in the back," Zeller says. "Without him, I wouldn't be around."

Zeller says restricting the special visa program is a big mistake. The US made an agreement to help protect these interpreters who risked everything to support the American mission.

A bipartisan group of US lawmakers have introduced legislation that would make an additional 2,500 special visas available for Afghan interpreters. Meanwhile, there are 8,400 American troops on the ground in Afghanistan, and the general in command of US-led forces there says he needs "a few thousand" more.