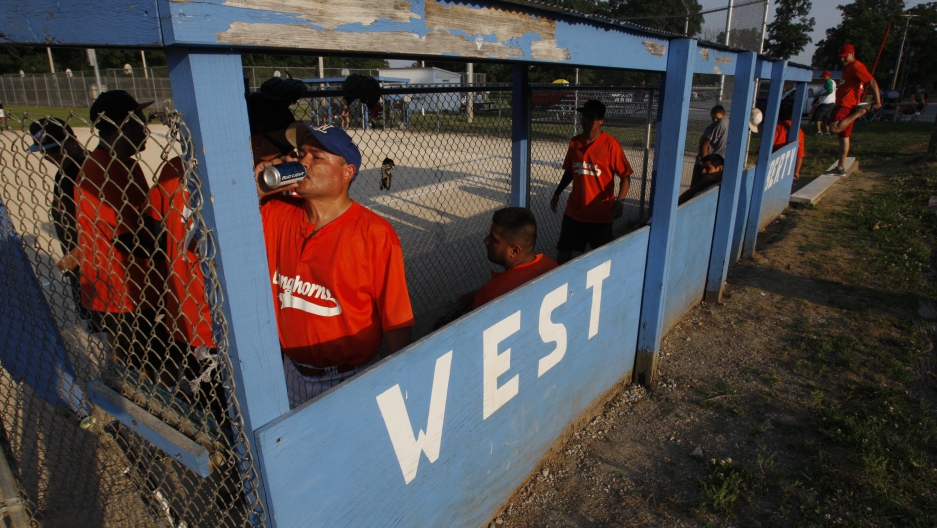 Members of the Longhorns compete in a Friday night softball game in West Liberty, Iowa. The Hispanic population in this small town in eastern Iowa has surged in recent years.

Conservative Iowa Congressman Steve King took aim at immigrants over the weekend when he tweeted, "We can't restore our civilization with somebody else's babies." But a reporter for Mother Jones magazine says his grandfather was one of those babies.

Journalist Tim Murphy has reported from northwestern Iowa, so he is familiar both with Congressman King and the people of his 4th District. Murphy's grandfather was a Mexican immigrant who grew up in Mason CIty, Iowa, in the 1920s. Murphy, like many people active on social media, saw the congressman's words Sunday night when the Iowa Republican took to Twitter in support of the far-right, anti-immigrant Dutch politician Geert Wilders.

Wilders understands that culture and demographics are our destiny. We can't restore our civilization with somebody else's babies. https://t.co/4nxLipafWO

Murphy says the congressman's tweet may have pleased some of his supporters, but it misrepresents northwestern Iowa. "Steve King's 4th District — which is the district that my grandfather moved to when he was a very small child, when he was what you would call 'other people's babies' — was built on these kinds of immigrants coming and meshing into [the] fabric of the community," says Murphy. "It was like that in 1920, and it's been like that ever since."

Murphy launched a tweet of his own that has been shadowing Congressman King's post across the Twitterverse:

Steve King's district was, of course, built by "other people's babies"—as ably recounted by one of them, my grandfather pic.twitter.com/DMOk7O7HAC

It includes a newspaper article written by his grandfather, Jesse Torres, when Torres was in his 70s. It speaks lovingly of Lehigh Row, the tract of workers' housing built by the Lehigh Portland Cement Company in 1910, which would become home for generations of immigrant families who came to work in Mason City. The houses are no longer there, but the people who lived in them helped build northwestern Iowa, literally, by making and hauling the concrete used for construction.

While Lehigh Row is gone, Murphy says many small Mexican-American communities remain scattered across northwest Iowa. "The people there are working not necessarily in the cement business now; they're working in agribusiness," says Murphy, "but it's the same kind of story popping up now that would have been popping up then. And it's obviously become a political issue."

"This is something that Steve King has spent his career in Congress talking about," he says. "But if you talk to people in northwest Iowa and in Steve King's district, they kind of recognize that these immigrant groups are the fabric of the community. They contribute to the economy, they contribute to the culture of the area, they play on the sports teams, they go to the schools. And so I think the idea that Steve King's district — or even Steve King's voters — are this homogeneous, is really misguided."

In a previous version of this story, some references to King's district incorrectly states his district was in Ohio, instead of Iowa.