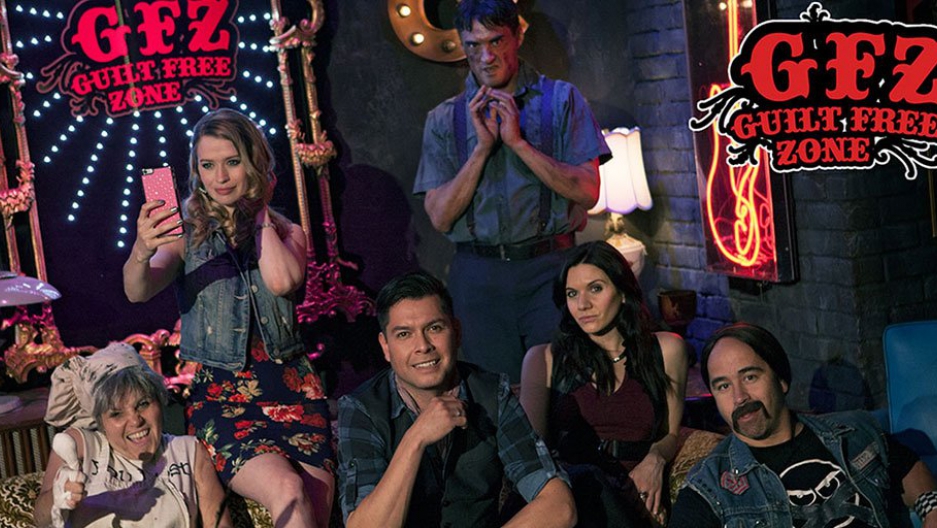 The "Guilt-Free Zone," one of APTN's most popular programs, is set in a fictional speak-easy.

In Canada, the Aboriginal Peoples Television Network has been telling stories about Native Canadians for nearly 20 years. Now, its owners want to expand into the United States. If they succeed, they promise to bring some innovative programs to US airwaves.

In Canada, the channel broadcasts a wide range of programs about aboriginal communities and issues around the world, including dramas, documentaries, investigative news programs — even a cooking show. Most of the people who work on them are Native Canadians.

One of the most popular programs is a variety show set in a fictional speak-easy called "Guilt Free Zone." For non-Native viewers, the acts can be a big surprise.

In one episode, the featured entertainer is Lou Lou la Duchesse De Rière, a Mohawk burlesque dancer from Québec. She’s provocative and stunningly beautiful as she peels off a form-fitting turquoise evening gown, right down to a sparkly bikini.

In another episode, comedians in traditional Native clothing spend most of their time making “Indian jokes.” It’s a send-up of the awards ceremonies for aboriginal entertainers that are broadcast every year on mainstream Canadian TV. The first award, for best hip-hop album, goes to the group "Angry, Angry Indians" for their single, "Homey Gave Me Smallpox."

Laura J. Milliken produces "Guilt Free Zone." She’s Ojibwe, and as a kid growing up in Toronto, she devoured popular TV shows and movies. She says they brought her family together, but, they also left her with a distorted view of indigenous culture. She rarely saw Native characters. When she did, she says they were negative portrayals.

“I saw very poor people, very drunk, alcohol- and booze-addled addicted people who didn’t do much but sponge off the system, which is, unfortunately, what a lot of people think of us. And you know, I was made to feel ashamed of who I was,” Milliken says.

A group of aboriginal businesspeople set up APTN, as a nonprofit organization, to broadcast shows made with a Native point of view. It claims to be the world’s first national broadcaster dedicated to indigenous programming. LaRose describes it as “the only true reflection of indigenous people in Canada.”

“The only way we can tell our stories properly is for us to tell them,” he says. “It’s our lens. It’s our view, and we’re not trying to sort of make it look better or change it or adapt it to another audience because we are truly a reflection of ourselves.”

The network doesn’t release audience numbers, so it’s not known how many non-Native Canadians watch. But the number of programs has increased over the years. This past season, APTN premiered more than 100 original shows produced almost entirely by indigenous Canadians. Many of the shows address the hard issues facing Canada’s indigenous population. The crime drama "Blackstone" explores issues such as alcoholism and drug abuse on Native reserves.

In one scene, an indigenous teenager is shown snorting cocaine with her girlfriends and getting ready to go on her first job as a prostitute. One of her more experienced friends offers advice about how to speak to her clients. “Never use the word 'trick,' 'john' or 'client.' We call them 'dates.' Guys like it,” she says.

Programs like "Blackstone" are controversial in indigenous communities. But APTN chief executive LaRose says they’re essential because they put problems in a historical perspective and show how people are addressing them.

Producer Milliken says all the network’s shows are relevant because they give aboriginal communities a voice.

“It’s become a part of our culture, which I also think is really beautiful, that we almost have our own gathering place in the broadcast world now. That makes us feel like we actually have a voice, that makes us feel like we’re being heard. For us, it’s given us a home to express, and I think that’s an amazing thing,” she says.

It’s that voice that LaRose hopes to bring to US audiences. He’s negotiating a deal with a US distributor for a new channel called All Nations Network. If he succeeds, the channel could start broadcasting later this year. LaRose says that at first, it would show the same programs as in Canada. His goal is to build an aboriginal broadcasting industry south of the border and to produce shows specifically for the US.