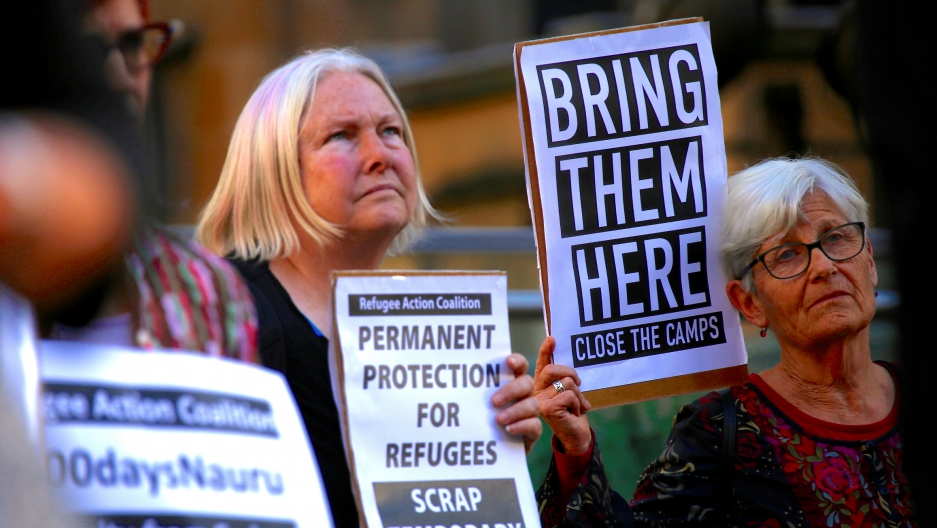 Refugee advocates hold placards and banners during a protest in Sydney on October 5, 2016. Many Australians want the government's offshore immigration detention centers in remote locations in the Pacific Ocean closed. The International Criminal Court has been asked to investigate human rights abuses at the two camps.

Australia is not a country you'd expect to be investigated for crimes against humanity, but that's exactly what a group of human rights lawyers is asking the International Criminal Court to do.

"Both of these are extremely remote Pacific islands," says Rebecca Hamilton, an Australian human rights lawyer who teaches at American University's Washington College of Law.

She's not kidding. One camp is on the tiny 10-square-mile island nation of Nauru. It's in the middle of Pacific about 25 miles south of the equator. There's nothing near it. 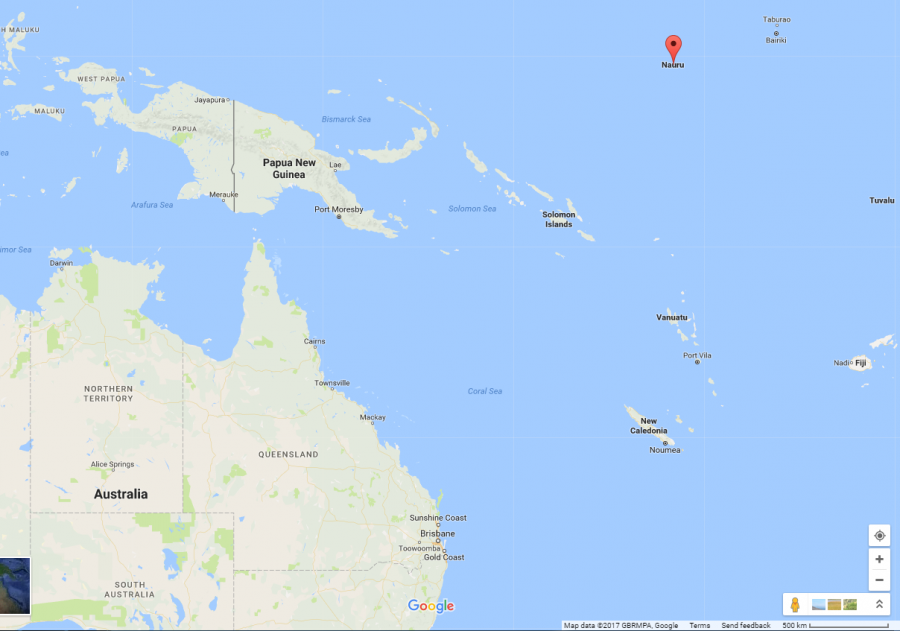 The 10-square-mile island of Nauru is 20 miles south of the equator and 2,800 miles from Australia.

The other camp is on Manus Island, part of Papua New Guinea but several hundred miles off its coast in the Admiralty Islands.

Hamilton says Australia outsourced the detentions camps with one thing in mind: "They have been set up by the Australian government with the specific purpose of not letting any asylum-seekers onto the Australian mainland."

The offshore location of the detention camps also allows Australia to skirt its obligations as a signatory to the United Nations Refugee Convention.

"The rationale has been that making the boat journey to Australia is very dangerous and [the government] doesn't want people trying to make that journey," Hamilton explains. "But the situations that these people are fleeing are incredibly dangerous as well and if they are making the calculations that it is worth them to try to at least seek asylum in Australia, then the Australian government has no right to say that they can't pursue that option."

The asylum-seekers on Nauru and Manus Island number around 1,250. Many have been there for nearly four years. The camp on Manus Island houses single men only. Nauru has women, families and children.

The 108-page brief submitted to the ICC on March 6 describes the "harrowing practices of the Australian state and corporations towards asylum-seekers," including long-term detention in inhumane conditions, physical and sexual abuse of adults and children and "epidemic levels" of self-harm among those held on the islands.

Hamilton says even though the camps are outside Australia and operated by people who are not Australian citizens, if the ICC decides to investigate and finds something, it's the Australian government who is still in the hot seat.

"Australian government officials, to the extent that they are aware of what is happening and are continuing to authorize it, they're absolutely on the hook," she says.

Hamilton says the evidence presented in the report to the ICC was gathered through interviews with former officials who have worked at the detention camps. "The Australian government has outsourced the running of these islands to private contractors. And as some of those people have resigned and left those positions, they have spoken out about the conditions that they've seen on the island." 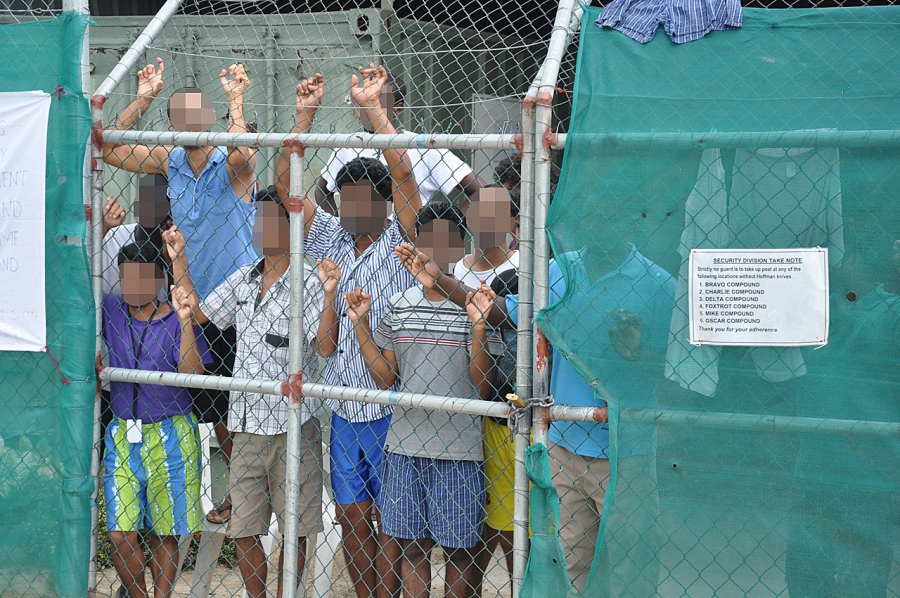 Asylum-seekers look through a fence at the Manus Island immigration detention camp on Papua New Guinea. Manus Island is one of two offshore detention camps funded by the Australian government to house migrants intercepted at sea. Some of the asylum seekers have been at the camp since 2013.
Credit:

In 2015, the UN special rapporteur on torture accused Australia of systematically violating the International Convention Against Torture by detaining children in immigration detention and holding asylum-seekers in dangerous and violent conditions on Manus Island. Hamilton says human rights organizations have also done "an amazing job of documenting what has been going on there, even in the face of extremely persistent efforts by the Australian government to keep any reporting off these islands, and the allegations seem to be pretty consistent."

The lawyers also drew on a trove of documents leaked to The Guardian newspaper in August 2016. It comprised more than 2,000 incident reports from inside the detention camp in Nauru that described assaults, sexual abuse, self-harm attempts and child abuse. More than half of the incidents involved children.

It's not yet clear if the ICC will investigate the controversial camps. The court must first decide if it wants to do a preliminary examination. Hamilton says the standard for that is: "Is there a 'reasonable basis' for thinking that these allegations that are being made could be true? If there is and if the particular situation meets different legal standards for the court, then the court is able to start a preliminary examination."

Hamilton is hoping that the submission to the ICC will help pressure the Australian government to shut down the camps and allow the asylum-seekers to resettle somewhere safe.

She hopes that the submission to the ICC will get it there.