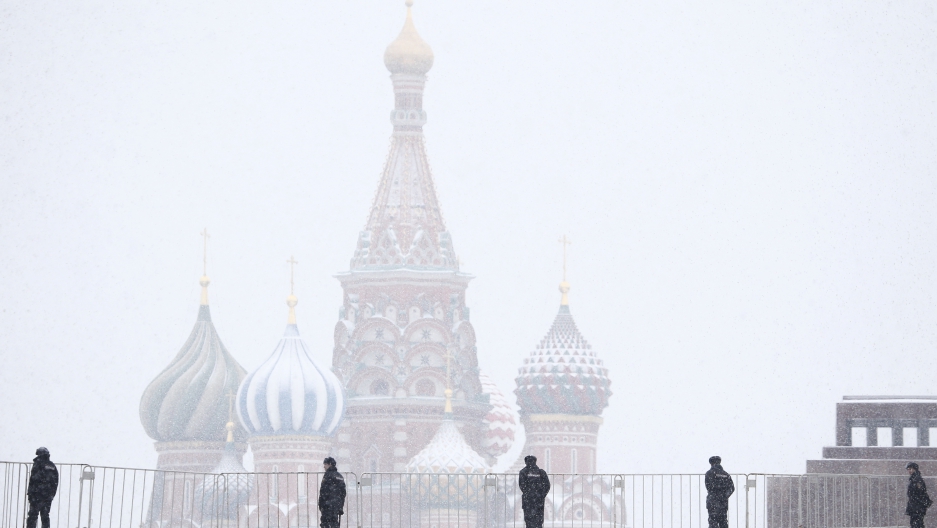 Police block access to the Red Square during a snowfall, with St. Basil's cathedral seen in the background, in central Moscow, Russia, February 23, 2017.

Yana Savchuk could have been saved. But when the 36-year-old Russian hairdresser called police in November saying that her partner was going to kill her, the officers who arrived cast off her cries for help as ridiculous.

“If you get killed, we will definitely come to examine the body,” one police officer quipped, as recorded on the victim’s phone, before leaving without offering protection. “Do not worry.”

It was a domestic violence case that shocked Russia in 2016, triggering fiery debate on the role of police in addressing an epidemic that kills at least 12,000 women every year, according to Human Rights Watch. To understand how endemic Russia’s domestic violence problem is, consider it’s about 30 times worse than in neighboring Turkey, which has half the population. It's about 37 times worse than the US which has twice the population of Russia.

This story is the first part of an Across Women's Lives three-part series that will run today, Thursday and Friday here on PRI.org, with related stories on PRI's The World as well. Check back to pri.org/womenslives for future stories.

That statistic does not include the likely high number of unreported cases — many women in Russia, and around the world, do not report domestic abuse because of feelings of shame or fear of retribution.

Others, like Savchuk, lose their lives despite reaching out for help due to a police mentality that largely underplays gender-based violence and a police force relatively poorly trained and often legally unable to properly assist victims of violence.

"When I respond to domestic violence, I often feel useless because I can't arrest the abuser without the victim's written complaint," said Vladimir, a policeman in a roughly 300-person village just outside of Moscow. "We don’t have a procedure of compulsory arrest."

Vladimir would only speak on the condition that he not be identified by his real name.

In Vladimir's village, dilapidated wooden houses sit not far from the mansions of those who commute into Moscow. Income doesn’t seem to matter — Vladimir responds to domestic violence calls at both types of properties every weekend. Usually alcohol is involved.

But Russia is heading in the other direction: On February 7, Russian President Vladimir Putin signed a controversial law that decriminalized domestic abuse for first time offenders who do not inflict bodily harm requiring hospital treatment. Prior to Putin signing the bill, abusers faced up to two years in prison. Now, if found guilty in court, abusers could face a fine of between $85 and $500, 15 days in jail or compulsory work.

Yevgeny Roizman, the mayor of Yekaterinburg, Russia’s fourth-largest city, said the impact of the bill was felt immediately.

Two days after Putin signed the bill, he announced on Facebook that the number of calls to police in Yekaterinburg regarding domestic violence rose from about 120-130 per day before the bill to 300-350 per day after.

Members of the Russian parliament voted almost unanimously in favor of the bill, with parliament speaker Vyacheslav Volodin, a key advisor to Putin, saying the bill was “necessary to do everything in order to preserve the family.”

“We think that the term ‘domestic violence’ is connected to ideas of radical feminism where a man is often portrayed as a potential aggressor,” said the church’s commission on family affairs in a 2015 statement. “This contradicts multiple research results that say that a family based on marriage is the safest environment for women and children.”

Activists and human rights organizations warn the bill will only exacerbate the problem. They have for years demanded a coherent law on domestic violence. Before the decriminalization bill was passed, victims had to sue their abusers. That meant that they had to gather all the documents, evidence, medical assessments and pay lawyers on their own dime.

According to the new bill, cases of battery may no longer be prosecuted privately — instead, it’s now the police and public prosecutor’s responsibility to prove in court that the victim was indeed abused. But what happens when police don’t believe a punch to the face is domestic violence?

Alexander, a 26-year-old police officer who also insisted on being identified by a pseudonym in order to speak, lives in Belgorod, near the Russia-Ukraine border. He says has constantly responded to distress calls over the last two years.

“Sometimes the woman is shouting on the phone that she is getting killed, and we all come with the investigative group and there is nothing,” said Alexander, explaining how he doesn’t think many women who call for help are actually in danger.

In these cases, he says, police officers fine the woman who called for help the equivalent of $40 if officers interpret claims as slander. The man — often an intimate partner — who she accuses of threatening her is let off the hook entirely.

Alexander doesn’t expect the new law will make much of a difference in the lives of at-risk women. That’s largely due to his definition of domestic violence.

"I get calls, but it's rarely to deal with domestic violence,” he said. “I think that the term domestic violence means when someone is tied to a bed and abused or tortured. When husband and wife are fighting, that's a different matter."

Such perceptions by male officers speak to the research showing that increased numbers of female police officers lead to lower rates of domestic violence and murders.

In Russia, women make up 20 percent of the police force, according to statistics on total police and women officers provided by Deputy Interior Minister Igor Zubov. PRI could not independently verify this number and there are no reliable public statistics to back up this claim. That’s a relatively high number, especially compared to the US, where women make up fewer than 13 percent of law enforcement. However, most Russian women officers are tasked with administrative and low-level education duties. They largely do not play leading roles in police stations or have the ability to hire, fire or enact policies dealing with issues of domestic violence and femicide.

Roman Habarov is a 45-year-old former police officer in the central Russian city of Voronezh. He says the trouble is that officers don’t have the tools to respond to domestic violence calls. Most times, women who called to report violence then wouldn’t write an official complaint.

This situation would repeat, he says, until one day they would arrive too late and the woman would be found thrown out of a window, strangled, beaten or stabbed to death.

"For the last 20 years, Russian legislators have done absolutely nothing to solve the problem of domestic violence," said Habarov. "Our society needs to develop. Police and legislators won't be able to do anything if the woman thinks that her husband has the right to beat her."

Even when victims would start the legal process to hold their abusive partners accountable, Habarov says he can’t remember a single case where the abuser was actually sent to prison for battery.

“We either have to release [accused abusers] straight away, or break the law ourselves and take them in,” he explained. “Sometimes it is common sense to just arrest them and allow the children to sleep and go to school in the morning, and the wife would remain unharmed. The next day he would sober up and say sorry to his wife, and she would accept the apology."

Habarov says it’s routine for police officers not to respond to the first call for help. The retired policeman says he’s haunted by his time on the force.

There were so many times, he recalls, that his colleagues simply shrugged off calls for help. Instead they placed blame on the victims for “nagging their husband into beating them.”

Yulia Bragina is a Moscow-based journalist and contributor to The Fuller Project for International Reporting. Sophia Jones, a Fuller Project senior editor and journalist, reported from Istanbul. Some names have been changed at the request of police officers who were not authorized to speak to the press.