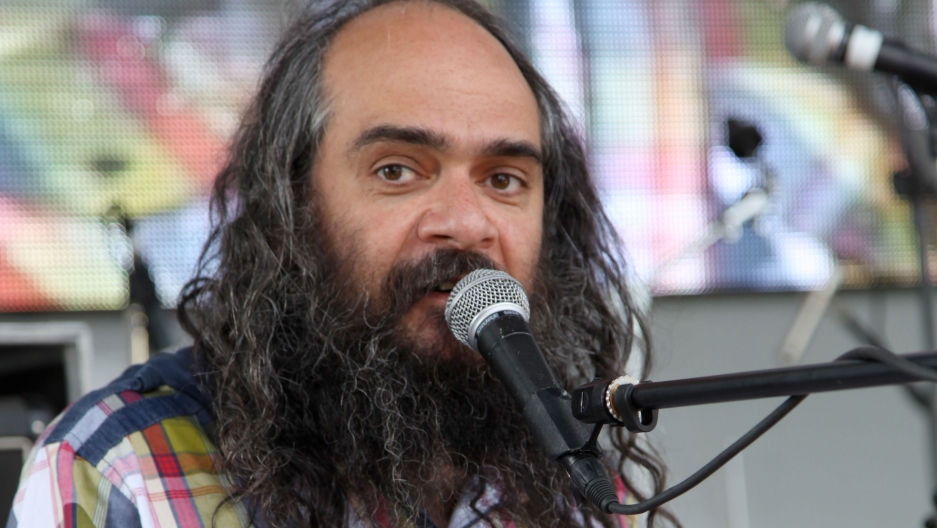 When you think of Russian literature and culture, you might think of thick novels full of weighty meditations on faith and fealty. And yes, there is a lot of that. But as musician Pavel Lion shows, the literature can also be really funny.

“Russian literature and culture has a big tradition of humor and satire — and parody. It's always existed, starting even from Middle Ages,” Lion explains. “Such as skomorokhi, wandering minstrels and spoofers.”

Pavel Lion, who performs under the name Psoy Korolenko, was born in Russia to Jewish parents. He’s based in the US, but he’s just as likely to be playing a festival in Krakow or a club in London. He writes not only in English, but also his native Russian, the French of his grandfather and the Yiddish of ancestors he never met. And he collaborates with poets and translators, crafting a playful vision that lands somewhere between "Weird Al" Yankovic and Fyodor Dostoyevsky.

In one example, he takes "Oyfn Pripetchik" — a classic sentimental Yiddish song about learning in the old country — and turns it into a song about strict teachers — a sort of rabbinic version of nuns with rulers. And then, out of nowhere — but in a way that seems to make total sense — it morphs into Pink Floyd’s classic lines: “We don’t need no education/ We don’t need no thought control.”

For a Soviet kid growing up in Moscow in the '70s, discovering the language of rock music was something of a revelation. But despite Lion’s love of language, the first Western music he embraced was something not generally known for its lyricism: disco.

Lion’s music clearly keeps this same sense of joy — even when discussing some pretty harsh realities. And while his humor can sometimes be a little biting, Lion emphasizes that he’s not concerned with politics or satire. Because, ultimately, that’s not what he sees as important.

“Satire and sarcasm are ultimately negative feedback to something. And I am trying to be hyperpositive,” says Lion. “Because we know how to reject, we know how to deny. So, therefore positive humor, soft humor, is something precious that we have to cherish and preserve.”

And throughout Lion’s work, it’s that soft humor that comes through. While his songs play around with differences — between languages, between cultures, between political systems — ultimately, they’re about the places where it all overlaps and where we all speak the same language.