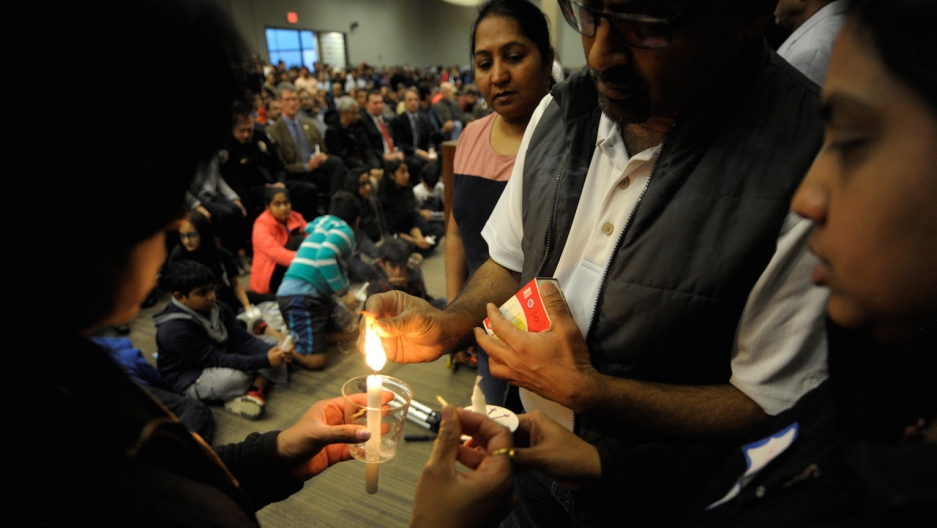 Organizers light the first candle during a vigil for Srinivas Kuchibhotla at a conference center in Olathe, Kansas, Feb. 26, 2017.

On Tuesday, hundreds gathered in the Indian city of Hyderabad to pay their respects as Srinivas Kuchibhotla was cremated.

“May Srinivas Kuchibhotla be immortal!” mourners shouted as they processed from Kuchibhotla’s family residence to the crematorium. “Long live Mother India!”

Standing among family and friends, Kuchibhotla’s father lit the funeral pyre of his eldest son, a Hindu rite which a son traditionally carries out for a father.

The week before, Kuchibhotla was shot dead in a bar in Olathe, Kansas by a US Navy veteran. The slain engineer was 32 years old. Another Indian engineer and an American were also injured in the shooting. A few hours later, the attacker reportedly told a bartender that he had “shot and killed two Iranian people.”

Kuchibhotla’s death headlined the news in India, and was reported by one Indian newspaper as “possibly the first casualty of the religious, racial and ethnic divisiveness that has swept the US following the election of President Donald Trump.”

“Don’t be shocked! Be angry! Trump is spreading hate. This is a hate crime!” tweeted Siddharth, an Indian actor.

In the US, contributions poured in to online funding campaigns for the victims, and a vigil was held in Olathe to mourn Kuchibhotla’s death. While politicians in the US and in India condemned the violence and offered condolences, a week passed before President Trump denounced the attack, during a speech to Congress on Tuesday.

“While we may be a nation divided on policies, we are a country that stands united in condemning hate and evil in all of its very ugly forms,” Trump said.

The president’s delayed response to the killing, which is being investigated as a hate crime, has done little to allay fresh fears among some Indians that their relatives and friends in the US may not be safe. Hate crimes against Hindus and Sikhs occurred during the Obama administration as well. But the Kansas attack has raised concern among Indians that anti-immigrant sentiment in the US, apparently encouraged by Trump’s rhetoric, will not exclude them.

“It does upset us when things like this happen, especially when there was no provocation,” says Meera Aggarwal, an education consultant based in Gurgaon, a city south of New Delhi. Her daughter is studying law at Georgetown University in Washington, DC. “It is very disturbing and scary that your mere presence, the color of your skin or the way you talk can trigger something as violent and as final as this.”

Aggarwal says she finds herself calling her daughter more frequently, warning her to avoid any form of confrontation.

“Every day I worry. I’m telling her small things like be with a group, don’t get into an argument, stupid things which I don’t need to tell her on a daily basis,” she says.

Aggarwal is not alone in advising her daughter to keep a low profile. Indians with US connections are becoming more aware and more concerned about their perceived foreignness. Kuchibhotla was ethnically Telugu; after his death the Telangana American Telugu Association, a group for Indians from the country’s Telugu community, shared a list of tips for Indian immigrants in the US, which included avoiding arguments in public spaces and leaving the place if provoked.

“As much as we love talking in our mother tongue, it can often be misconstrued,” said one of the tips. “Please see if you can communicate in English in public spaces.”

In an interview with CNN, Alok Madasani, Kuchibhotla’s friend and colleague who was injured in the shooting, said they were not speaking in their native Telugu at the time. He said Kuchibhotla made it a point to converse in English in public.

“One of my friends lives 10 minutes away from the place where the shooting took place,” said Dhara Patel, a resident of Anand, Gujarat who is worried for the safety of her relatives and friends living in the US. “She told me that that place [where the shooting occurred] is considered to be one of the safest, but now even to take a walk outside she is scared.”

So far, Indians have not been targeted in Trump’s rhetoric or measures against immigration. Indians hold nearly half of the H1B visas that the US hands out to highly skilled migrant workers. Groups like the Republican Hindu Coalition supported the president’s candidacy, and Trump himself praised Indian Americans for their contributions to the United States.

But Patel doesn't thing that much matters. “I don’t think anyone can tell the difference between a Middle Eastern[er] or an Indian or any brown people. No one is safe,” he says.

Both Patel and Aggarwal worry that Trump’s policies will encourage racism and cause a spike in attacks.

“There are prejudices dormant in all of us, but because of [the] atmosphere in America, all these prejudices are coming to the fore,” says Aggarwal. “Because of the way the leadership talks and emotes, these feelings are becoming more active.”

The Indian government’s response to the attack has been muted. While it was quick to condemn Australia after a spate of attacks on Indian students in 2009, the Indian government was initially silent about the Kansas attack. No travel advisory or warning has been issued for Indians in the US.

The external affairs minister later tweeted she was shocked and that Indian Embassy officials were rushing to Kansas.

I am shocked at the shooting incident in Kansas in which Srinivas Kuchibhotla has been killed. My heartfelt condolences to bereaved family.

But Indian media has closely covered news of the attack, with several editorials criticizing Trump’s silence and linking Kuchibhotla’s death to rising hate crimes under the Trump administration.

“Not since the end of the Second World War has a [US] president equivocated so deeply in the face of demonstrable racism,” read an editorial in the Indian Express. “Long years of struggle lie ahead, for the damage Trump has inflicted on the United States’ most cherished values will, almost certainly, outlast his years in office.”

The media also predicted a dip in Indian travel and immigration to the US — a trend that’s already begun worldwide. One article even surmised that Trump has achieved the impossible, by making Indians lose interest in lucrative arranged marriages with Indian Americans.

“As long as you’re not white, [you’re] going to be affected,” says Aggarwal. “A lot of people are asking me now whether you want your daughter to work in America, and I’m saying absolutely not.”

The US remains a popular destination for Indians, with students alone accounting for over 130,000 US visas issued annually in the last two years. While it is unlikely that this interest will disappear, some may like to keep their options open.

“I just heard that the Canada government is opening its doors to Indians with visas on arrival, so I think many people are going to divert to other countries now,” says Patel.