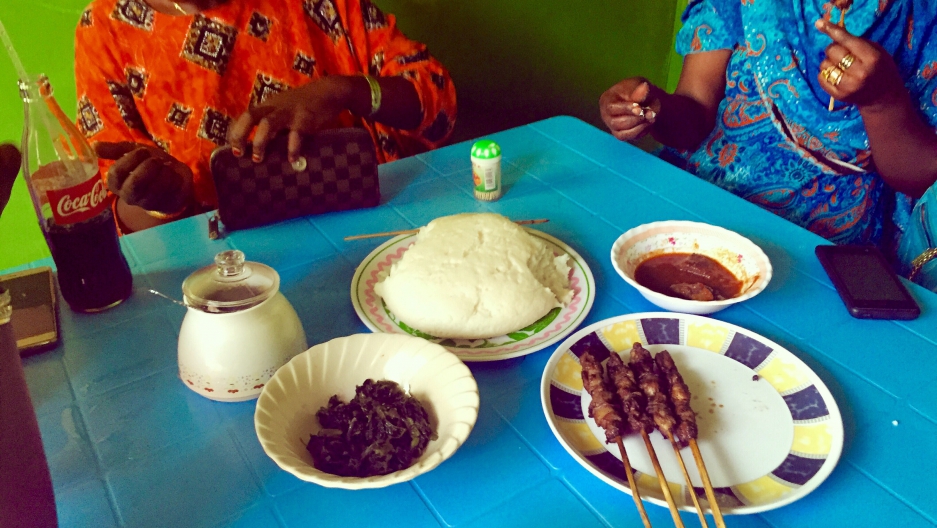 These women spend part of their days running a café and another part reporting on government killings.

As a journalist, it was Aline’s job to report on her country and her president. But she didn’t know how to do her job any more without getting killed.

Her president is a power-hungry megalomaniac, widely disliked, who brandishes negative press as “fake news.” He wields his power in dangerous ways, putting vulnerable ethnic groups at risk and refusing to participate in open and democratic dialogue.

“[A member of the president's communication team] sends me messages telling me to stop writing and reporting,” Aline said as she scrolled through recent WhatsApp messages. “I used to know him — he used to be my friend.”

The president in question is Pierre Nkurunziza, leader of Burundi for over 10 years. Nkurunziza declared in April 2015 that he would run for a third term. That decision violated the Arusha agreement — a vital accord that had eased ethnic tensions between Hutus and Tutsis and brought relative peace to the region over the last decade. Turmoil has taken over the country.

Protests and violent clashes erupted in the capital Bujumbura, and many looked to the country’s history and feared another civil war, or genocide, was imminent.

Instead, President Nkurunziza slowly and steadily dismantled the country. A campaign of violence and intimidation has led to a social and humanitarian crisis, one where targeted assassinations, torture and sexual violence are daily occurrences.

People like Aline worried they’d become yet another casualty — both as a journalist and a woman. In January, Human Rights Watch announced it had found at least five mass graves near the capital. Today, more than 400,000 citizens have fled to neighboring countries. In a country of about 10 million, an estimated one-tenth of the population is in need of humanitarian assistance.

The Burundian government and its supporters deny any wrongdoing. Officials say people are leaving the country because of hunger, not because of ethnic targeting or violence. They also say reports of human rights abuses allegedly committed by the police and the Imbonerakure, the Burundian ruling party’s youth league, were made up by Human Rights Watch and the European Union, and even protested their findings in the capital in February, calling such findings “fake news.”

Underlying Nkurunziza’s entire third term has been his war on independent media. Following a failed coup attempt, he declared journalists were “fighting the government” and marked them as an enemy of the country and betrayers of the Burundian people. The police and the Imbonerakure, the youth wing of Burundi's ruling party led the rampage: Journalists were detained and killed, newspaper offices and radio stations were set on fire, radio signals were cut, and laptops were found riddled with bullet holes.

Alina, Chanise and Jeanette were covering corruption, financial scandals and human rights abuses in Burundi before they too were chased out of the country. Following the failed coup against Nkurunziza in May 2015, the trio of intrepid reporters, all in their mid-late 20s, began receiving death threats for their reporting. One by one, their friends and colleagues were forcibly ‘disappeared’ and killed. They made a choice: run or die.

Like tens of thousands of other Burundians, they sought refuge in nearby Rwanda, where they would later opened a cafe in the capital, Kigali.

Two years later, the three women now find themselves hustling to serve up meals for locals during the day to make ends meet.

“Are you hungry?” Aisha asks a customer, placing colourful bowls of porridge-like ugali and beef onto the table. The cafe, nestled on a dusty side path in the city’s Muslim district, is sparse. There is only room to fit two blue plastic tables and a scattering of wooden chairs. Its walls are painted a blinding shade of lime green.

Though some independent journalists remain in Burundi today, they’re under constant surveillance and face a lingering threat of arbitrary detention. Others, with no income and no place to run, have even ended up in refugee camps in other neighboring countries, like the Democratic Republic of the Congo and Tanzania.

But as night falls on Kigali, when Aisha, Chanise and Jeanette close down the kitchen and head back into the city, the journalists pick up where they left off the night before and continue reporting on the slow destruction of their country — from afar. They’re part of a secret Burundian journalist network, one that operates under the radar of Nkurunziza’s control, that relies on encrypted messages, cross-country communication and a fearless drive to put their lives on the line in the name of truth.

Just 48 hours after the failed coup against Nkurunziza, the women and a collective of journalists banded together and formed an informal network that independently reports on the violence in Burundi. Exiled journalists, as well as journalists still operating in the country, make editorial decisions and cover what’s happening in Burundi, using Facebook, Twitter, SoundCloud and WhatsApp to share their reports. The journalists all file under anonymous bylines in an attempt to protect their identity and to avoid putting their family at risk.

“We send our reports in secret,” Aline said as she scrolled through WhatsApp messages. “This is the only way we can report on what’s happening in our country without ending up dead.”

The women were reluctant cafe owners. They worked at Radio Publique Africaine (RPA), an independent radio station in Burundi, before it was set on fire in May 2015.

“Our station said things [the government] didn’t like, and they wanted us to shut up,” Chanise said bluntly, sipping on a bottle of coke as motor bikes, used as taxis by locals, sped by outside. “For us it was our second home.”

The war on “fake news” and unsubstantiated rumours has become the focus point for politicians and media outlets around the world, from Germany to the United States. But in Burundi, it’s not a new focus point, but rather a necessity that’s been ingrained in their country’s history footprint for decades.

In the wake of genocide and civil war in Burundi, the need for fair and accurate media to counter the “media of hate” was crucial. In the late 90s, several radio stations were established to help reconcile the country’s open wounds: The radio stations hired a mix of both Hutu and Tutsi journalists, and the output focused on reconciliation, and countering dangerous rumours and false information.

Burundi had built one of the most vibrant, independent broadcasting media sectors in Africa, and for a country where the majority of citizens either have limited or no access to the internet, or live in rural areas, radio is their lifeline.

When their radio station was set on fire, the trio of women watched as decades of bridge-building and balanced and trusted post-conflict reporting was dismantled in a matter of weeks. The floodgates have since opened, and with them, the same poisonous misinformation and ethnic propaganda as before, they say. Accusations of sexual assault and rape, corruption, and killings have been dismissed.

“They keep lying and saying none of these things are happening,” Jeanette said as they passed the remaining food around the table. “This is why I have to keep reporting on the truth.”

As dusk fell, the women mulled over what stories they would tackle that night. They discussed news from back home — their former lives and the people they lost and left behind.

“When they take people, you know you’ll never see them again,”  Jeanette said. “We lost people every day. They put some people in sacks, and threw them into the river.”

“When you see a soldier or a policeman, your heart beats faster, and you say to yourself, ‘now is when I’m going to die.’ If someone finds you and beats you, and you survive the beating, you say thank you.”

The three women fall into silence. Their bowls were now empty, and it was dark outside — time to hang up their aprons and get to reporting.

Rossalyn Warren, a reporter focused on women’s rights, reported from Kigali, Rwanda. Reporting was supported by The European Journalism Centre and done in partnership with The Fuller Project for International Reporting. This article was co-published with The Guardian.  Names have been changed for the protection of the journalists and their remaining family still in Burundi.

A previously published version of this article incorrectly stated the name of the women journalists' network.