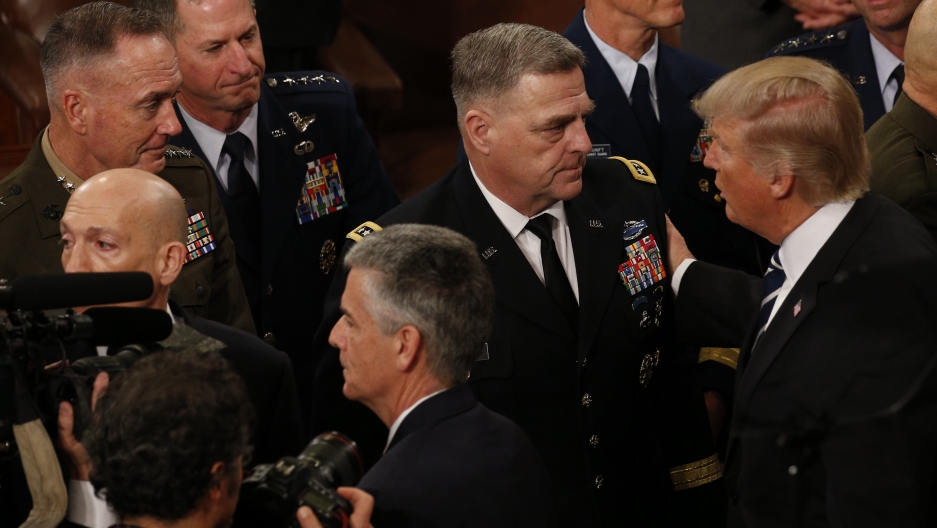 President Donald Trump talks to members of the US military's Joint Chiefs of Staff.

President Donald Trump's expected request for a $54-billion increase in defense spending seems like a lot. But it's not as big a boost as the White House portrays it to be.

"Really what we're talking about is more like a 3 percent increase, if you compare it to the previous budget under the Obama administration," says Dan De Luce, chief national security correspondent for Foreign Policy.

"In fact," says De Luce, "there were much bigger increases under President George W. Bush, who financed buildups for wars in Afghanistan and Iraq."

De Luce also says the $54 billion figure appears to be arbitrary, as it's not based on specific Pentagon requests.

While the White House hasn't said how the Pentagon should spend the $54 billion, the administration has offered a few suggestions.

"They talk about building a 350-ship Navy — including possibly dozens of new ships," De Luce says. "They talk about giving the military the resources it needs. But it's not clear that $54 billion, even if you accept that number, will pay for even some of these plans."

The president's request for more defense spending is part of his recurring promise to make America a winner. But De Luce says money alone won't help the US prevail in its current military conflicts.

"I think you may have a hard time finding any senior officer in the US military saying that money is the problem or the challenge in Afghanistan or Iraq and Syria," says De Luce. "There is no shortage of ammunition or bombs to drop or artillery shells to fire in Iraq or Afghanistan or Syria, because really you're not fighting a sophisticated high-tech enemy in those places. You're waging a kind of counterinsurgency campaign where there are car bombs, roadside bombs and militants who have AK-47s. It's not like you're taking on a modern army in, say, Russia or China."

In his first address to a joint session of Congress on Tuesday, Trump didn't talk about military threats from either Russia or China. But their forces would pose the largest military challenge to the United States.

"For the moment the US military is, by any measure, superior to both the Russian and Chinese militaries," says De Luce. And while both are a concern, De Luce notes, "China has the Pentagon especially worried ... The Chinese look [for] potential weak points in the US military force, especially the ships and the airplanes that the US deploys — and are spread thinly — across the Pacific."

De Luce says the Chinese are using an asymmetric strategy. Rather than match the US plane-for-plane and ship-for-ship, China has concentrated on developing its arsenal of missiles.

"[They have] missiles that can hit ships, missiles that can hit fighter jets or bombers. And they've also invested in drones and unmanned robotic technology. So over time," De Luce says, "the United States military does worry that China is closing the gap ... and potentially at some point they could make it very difficult for the US Navy to operate in the Western Pacific."

De Luce says critics of a military buildup believe the US should not spend exponentially on defense to meet a perceived threat from China. "In the end," he says, "they think China is more of an economic rival, and [that] a conflict is unlikely."

But supporters of a buildup reason that some spending is necessary to counter a Chinese threat. "The US military believes that they need to invest in research and technology," he says, "and that they need to look for ways to make aircraft stealthy, to evade radar, evade detection and therefore evade missile attacks from the Chinese. Also," he adds, "they feel they need to train US forces to be more skilled and tech-savvy, and to recruit more technologically savvy troops to run cyber warfare and systems."

Whether Trump's defense increase is 10 percent, or a more modest 3 percent, the Trump administration intends to finance it by trimming other government programs.

"The way the Trump Administration says it's going to pay for this is in very deep cuts in, for example, the State Department. So you would undermine foreign aid, foreign assistance and diplomacy, which even the Pentagon has long argued is very important in protecting US national security and preventing possible conflicts in the first place."