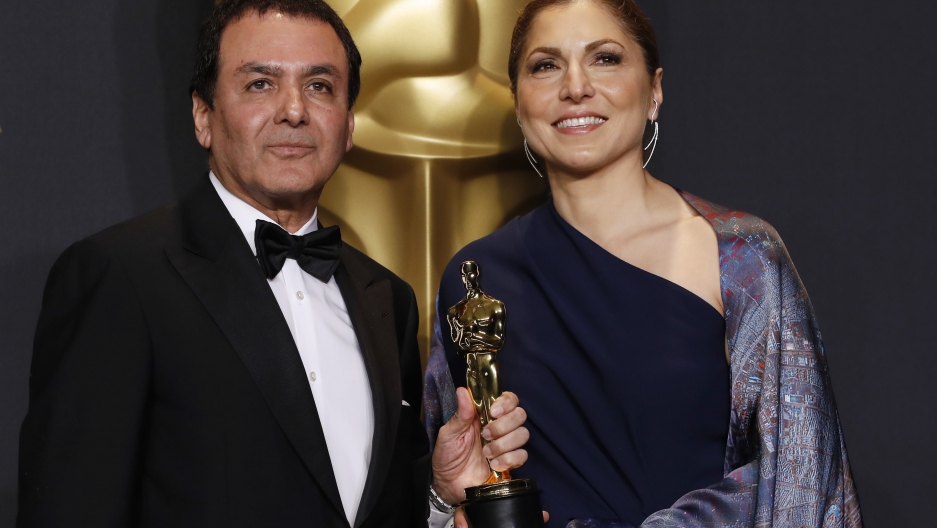 Anousheh Ansari and Firouz Naderi pose with the Oscar they accepted on behalf of Asghar Farhadi, who won the best foreign language film for "The Salesman."

Former NASA scientist Firouz Naderi has done some pretty amazing things. He helped land a rover on Mars. He searched for signs of life beyond the solar system. But he never thought he’d be standing next to Shirley MacLaine, clutching an Oscar statuette.

Naderi and fellow scientist Anousheh Ansari were tapped by Iranian director Asghar Farhadi to accept the Oscar for best foreign language film in his honor. Farhadi, who won the award for his movie “The Salesman,” boycotted the ceremony in protest of President Donald Trump's immigration and refugee ban against travelers from seven countries, including Iran.

Naderi says he agreed to go to the Academy Awards because of his own opposition to the immigration order, and particularly, to the disruption it caused to students. The ban is currently suspended, although difficulties at US borders have persisted for some travelers.

“The Iranian students that come from good technical universities in Iran are coveted by Stanfords and MITs because they are brilliant. And once they come here, one of two things will happen,” Naderi reasons. “Either they will get their Ph.D.s and decide to stay in this country, which is good for the American workforce. Or, they decide to go back to Iran and take back with them a certain level of empathy for America. Either possibility is good. So, why do we want to keep students from coming and furthering their education?”

Naderi was once in that position himself. He came to the United States for his doctoral studies in 1964. He returned to Iran, where he was targeted during the Iranian Revolution of 1979 for being a Western-educated intellectual. "The new government … said, ‘This is not your country. You are free to leave.'" So he did. Naderi returned to the United States. He spent more than 30 years in various positions at NASA, including as director of Solar Systems Exploration and manager of NASA's Mars Exploration Program.

While Naderi has spent many years studying the stars of outer space, he says he felt a little out of place among the stars of Hollywood. “It’s not my world!” Naderi laughs during a cellphone call from the Los Angeles International Airport. Though, he’s not a complete stranger to the paparazzi. “I faced the world press when we landed on Mars. So in terms of the atmosphere, the excitement … it’s something that I’ve experienced before in a different context.”

Still, Naderi wonders why he and Ansari were chosen to accept the award. “I don’t know Farhadi personally. And neither did Anousheh Ansari. We know of each other because of our work.” Naderi said they never even had a phone conversation before this.

“Certainly there are prominent Iranian actors and actresses he could have chosen to represent him," Naderi muses. "Why [did] he select two people associated with space?”

“Possibly, the reason is, once you go away from the Earth into space, and you look back at the Earth, you see it as a single blue marble. You see no borders, no lines, separating people. Maybe because [Farhadi] wanted to express his opposition to the travel ban, he thought that would be a powerful metaphor.”

At the awards ceremony, Naderi stood to the side of the microphone while Ansari read a short statement from the director:

“My absence is out of respect for the people of my country and those of six other nations whom have been disrespected by the inhumane law that bans entry of immigrants to the US,” Farhadi’s statement said.

The audience at the Dolby Theatre in Hollywood broke into applause.

“Filmmakers can turn their cameras to capture shared human qualities and break stereotypes of various nationalities and religions,” Ansari continued. “They create empathy between us and others. An empathy which we need today more than ever.”

As for the statuette itself, Naderi says once he had it in his hands, he didn’t want to let it go. “I held onto it for as long as I could! But I couldn’t bring it home.” Naderi says. The Oscar is currently at the engraver's. “I assume that the Academy will see to it that [Farhadi] gets it.”