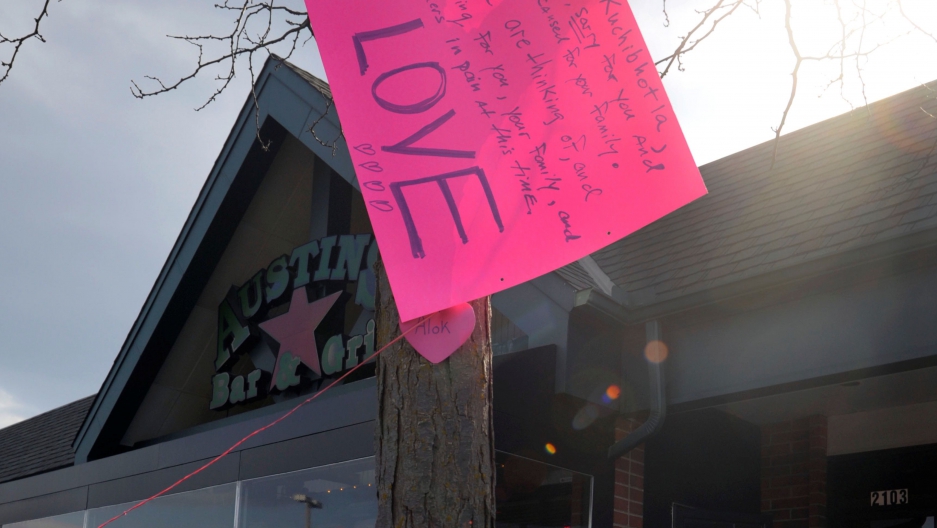 This is part of a makeshift memorial seen outside the Austins Bar & Grill, where Indian engineer Srinivas Kuchibhotla was shot and killed, in Olathe, Kansas, on Feb. 26, 2017.

An evening at the Austins Bar & Grill in Olathe, Kansas, quickly turned deadly when a gunman entered the establishment and reportedly yelled, “Get out of my country,” before he shot two Indian immigrants. The incident, which took place last Wednesday and was allegedly carried out by Adam W. Purinton, has renewed concerns about anti-immigrant sentiments in America.

Srinivas Kuchibhotla, one of the individuals targeted during the attack, later died from his wounds at the hospital. He was 32 years old and leaves behind a wife, Sunayana Dumala. His friend and fellow engineer, Alok Madasani, survived the attack while suffering injuries. Another patron at the bar, Ian Grillot, tried to stop the shooter and was injured, as well.

More than $1 million has been raised to support the victims of the attack. The White House has commented on the shooting, calling it tragic, but stopped short of calling it a hate crime.

"To right now intimate what the motives are, it’s too early to jump to a conclusion," White House Press Secretary Sean Spicer said last week. President Donald Trump, who has been quick to speak out on other attacks, has yet to personally address the shooting.

It has shaken the community, where, many Indian Americans have said they've felt welcome, in the past.

The predominantly white population of Olathe, Kansas, began to change in the 1980s, and by the mid-'90s, the community became a tech center when the mapping and GPS giant Garmin located there. Since then, the company has attracted educated workers from all around the world, and Olathe has transformed into a center for ambitious South Asian families.

But now, some Indian community members there are worried that things may be changing — for the worse.

Tapash Chakraborty, an Indian American resident of Kansas for over 20 years, and his 15-year-old daughter Jinia, knew the deceased victim, Kuchibhotla, through a local cricket league. Jinia says she’s wondering what this violent tragedy means for America.

“I’ve never felt blatant discrimination like this tragedy was,” she says. “It’s never occurred to me that people could resent someone for something like this. Srinivas was just trying to achieve his dreams and work hard, and this could happen to him? It never occurred to me, and at such a place close to home.”

Though Jinia and others are feeling the shock of this crime locally, the assault is carrying weight across the globe.

“I think the outrage is more back in India than over here, even,” says Tapash. “People in India feel like this should not have happened, and they’re kind of really angry about it. This is headline news — this is the headline news in all the newspapers in India.”

Jinia says that this violent incident shows her that teaching tolerance needs to start early, perhaps even at the elementary school level.

“I feel like this was an act of ignorance, racism and this should be taught from an earlier age, that this is wrong and that this cannot happen,” she says.

When it comes to the White House, Jinia says she is “shocked” and “outraged” that President Trump has not directly addressed the shooting.

“I feel like there might be some prejudice in the White House, and [a feeling] that these people don’t deserve to be here and they’re immigrants and they’re taking our jobs when that’s not the case,” she says. “Srinivas Kuchibhotla, he was more American than the killer, I would say.”

She continues: “[Kuchibhotla] came to America respecting people. He was a good person, he worked hard for what he believed. The killer, who was inebriated and he walked into a bar screaming at someone, he did not represent any American ideals that I have learned in my 15 years. He was not American in any way, and Alok Madasani and Srinivas Kuchibhotla, they represent the American ideals as I have learned them: They respected others, they did good for others, they worked hard, they had families that they cared for and they loved, and they were American and that’s what America should be.”

On the whole, Jinia says that the shooter is a “drunk racist” who wanted nothing more than to hurt people. Yet, Jinia’s father says the family won’t be scared off by this event.