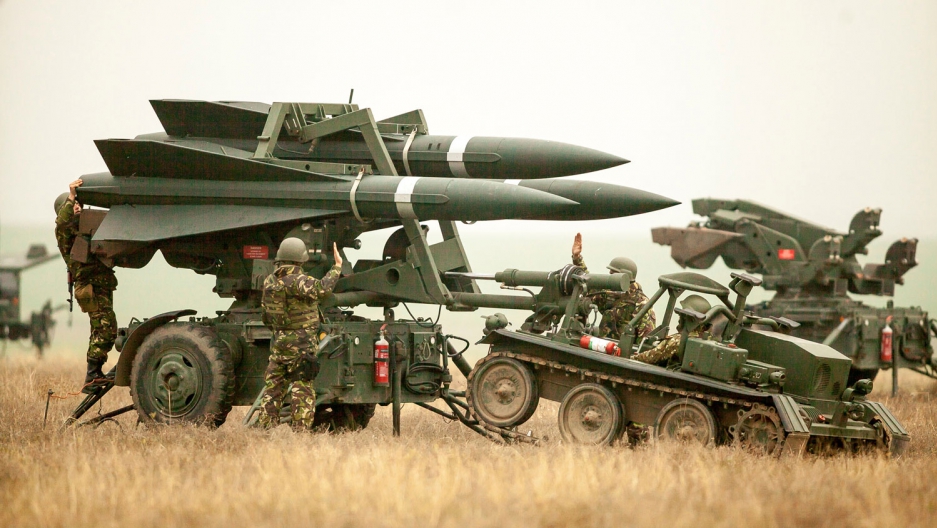 Romanian Army soldiers deploy a HAWK PIP III R ground-to-air missile launch pad during a joint military exercise with the US Army in Romania in November 2016.

The United States continued to lead the world in arms exports in 2016, netting a 43 percent increase in sales since President Barack Obama took office in 2009, according to recently released data from the Stockholm International Peace Research Institute (SIPRI).

Nearly 40 percent of all international major arms transfers from 2009 to 2016 are from the US, almost double the exports from Russia, the next largest seller in the world.

Nearly half of US exports went to the Middle East, but weapons were also sold to countries updating arsenals not involved in any armed conflict, explained Aude-E Fleurant, director of the Arms and Military Expenditure program at SIPRI.

“The US over the past years has been benefiting from large waves of modernization,” she said. “There are oil-rich countries where there is no threat perception that were stuck with old military equipment and decided to use growth in wealth to modernize.”

Heading into the Trump administration, the high level of weapons export is unlikely to change, experts say.

The Obama administration signed almost 200 separate arms deals in the Middle East alone, many of which haven’t been fulfilled yet and can’t be included in SIPRI’s latest figures. (Contracts take years to fulfill and the value and amount of weapons can change, which is why SIPRI only measures arms that are delivered.)

But those deals will move into production in the next year or two, adding to the growing size of US exports.

“They're selling amazing amounts of weaponry at a time where the Pentagon budget is leveling off a bit,” explained William D. Hartung, the director of the Arms and Security Project and the Center for International Policy. "Obama has made a ton of agreements and there is a chance that will be a delivery increase under Trump based on deals that Obama made."

When the US signs an arms deal, it's announced by Defense Security Cooperation Agency and a rough value is given to the deal. The deal still has to be approved by Congress and many re-negotiations will likely occur as it moves from agreement to production over the course of years, but the announcement is one of the few ways researchers have of tracking arms deals.

“The Trump administration could have as much of an impact by accelerating the deals already in the pipeline, rather than making new ones,” Hartung said. “Those orders being accelerated will have a big impact on these numbers. That could take a few years to show a big blip.”

In a speech Friday to the Conservative Political Action Committee (CPAC), Trump reiterated his commitment to a military buildup.

"We're also putting in a massive budget request for our beloved military," he told supporters. "And we will be substantially upgrading all of our military, all of our military, offensive, defensive, everything. Bigger and better and stronger than ever before, and hopefully we'll never have to use it, but nobody's going to mess with us, folks. Nobody. It will be one of the greatest military buildups in American history. No one will dare question, as they have been, because we're very depleted, very, very depleted. Sequester. Nobody will question our military might again."

Globally, the value of the arms trade is at the highest level since the end of the Cold War, fueled by sales by both the US and Russia to conflict zones in the Middle East and other sales in Asia.

“Wars are major drivers of arms acquisitions and arms procurement,” Aude-E Fleurant said. “The countries in the Middle East have very little production capacity in their own countries, so they would turn to major suppliers to fulfill their needs for weapons.”

Fleurant said a similar growth is happening in Asia, as countries stockpile more weapons as a response to “increased threat perception” from China.

“The trend is increasing,” she said. “If it continues, we're going to have to look at what the drivers are and if the recipient countries or regions remain the same. The way we look at it, arms transfers are a symptom of something going on. Is it because there is suddenly wealth and these countries using this wealth to acquire these weapons? Are there conflicts and they think they need these weapons to address security?”

In the Middle East, weapons supplied by the US and Russia are being used in conflict zones in Syria and Yemen. These countries continued to buy weapons despite the crash in oil prices, Fleurant said.

"I think the system is kind of skewed at the moment,” Hartung said. “A lot of it is driven by economics, which I think is a mistake. I think you should figure out with your ally what they need to defend their country and then scale your production. For some of the countries, I would probably put a hold on the sale until there was a sense that they would use the weapons more responsibly.”