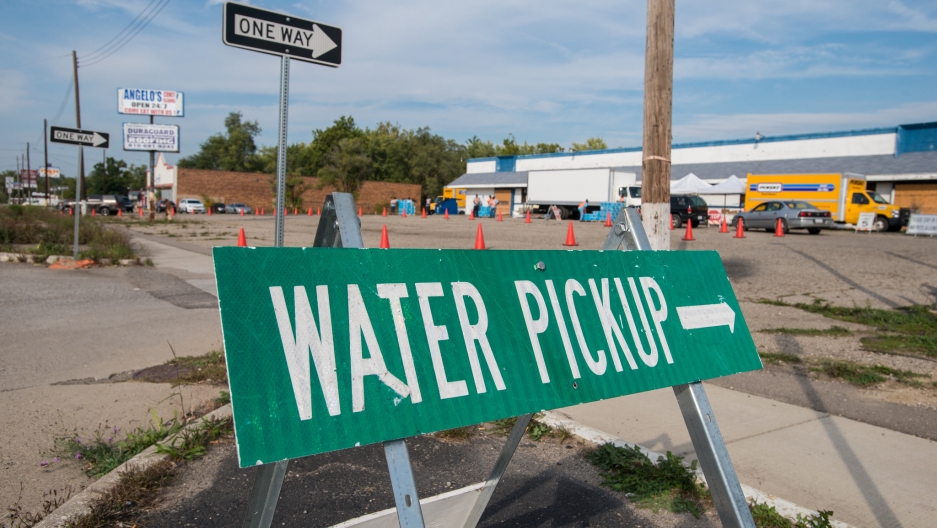 This image shows a sign pointing to a distribution site for water filters in Flint, Michigan, in October 2016.

In 2014, the city of Flint, Michigan changed the source of its water from the city of Detroit to the Flint River. But in the transition to river water, officials didn’t implement proper anti-corrosion measures. Lead leached from old pipes into the water supply, and in some homes, lead levels measured 10 times higher than the limit set by the Environmental Protection Agency.

Last month, lead levels in Flint's city water finally tested below federal-action level. But residents are still being cautioned to use filters on their faucets, or to drink bottled water.

Flint’s current water infrastructure has been damaged by corrosion, experts say. And the ongoing cleanup in Flint holds lessons for other American communities, many of which still have old lead pipes in their underground networks.

“We once thought we could do a very good job protecting the public and make the water safe even if they have a lead pipe,” says Marc Edwards, an engineer at Virginia Tech who alerted officials to high lead levels in Flint’s water.

“And in the aftermath of Flint, what we now realize, is, that's not the case, that probably we're never going to be able to say that it's safe to drink water from a lead pipe — not only in Flint but in fact, all around the United States.”

In Flint’s case, officials decided against adding a corrosion inhibitor when they first switched to river water. As Edwards explains, the decision not to use the chemical, which coats pipes to keep lead out of the water supply, had lasting consequences.

“There is damage that was done during this time period that’s irreversible,” he says. “Specifically, corrosion eats holes in metals, it weakens the pipes. So, to some extent, during this time there were massive outbreaks of water main breaks. Literally, the water was eating holes through the iron pipes.”

Edwards calls corrosion control “an important Band-Aid,” but says that ultimately, it doesn’t solve the problem of lead in public water systems. That takes replacing the pipes — including the galvanized iron ones that have been tainted by lead.

“What we discovered in Flint is that some of the worst houses actually had a lead pipe followed by a galvanized iron pipe,” he explains. “And what had happened over the almost a century some of these pipes had been in the ground is, the iron rust on the galvanized iron pipe sponged up lead at very, very high levels. And when the corrosion control was discontinued, that iron rust fell off with a lot of lead coming with it.”

As of January, Flint had removed about 800 lead-tainted pipes. The city estimates as many as 28,000 more may need to be replaced.

But in Flint, locating lead pipes hasn’t meant a one-stop look at a service map. Flint’s not alone. Lindsey Smith of Michigan Public Radio has reported that many cities don’t know where their lead pipes are buried — but an estimated 6 million lead service lines are still in use across the US. “They're really common in older cities,” she says.

After Flint’s crisis began, Martin Kaufman, an environmental hydrologist at the University of Michigan in Flint, helped the city digitally piece together information about where its lead service lines are. He says it wasn’t easy — Flint’s records were all on paper.

“The city of Flint had used paper maps to record an indicator on parcel maps, 240 of them, what type of pipe was servicing a parcel in the city,” he says. And the data, which was only recorded until 1984, was also incomplete. Records were missing for 11,000 property parcels — nearly one-fifth of the 56,000 total parcels in Flint.

Kaufman says it was enough to create a “preliminary indication” of where the city’s lead service pipes were. But other cities have begun the process of replacing lead pipes, only to discover a much bigger problem than they’d imagined.

Washington, DC, for instance, tried to replace its lead pipes in the early 2000s. “And the more they looked, the more lead pipes they found,” Edwards says. The city ran into another problem: Many residents weren’t willing to pay for their share of the new lines connecting their homes to the water main.

“Less than 1 percent of the people did that,” he says. According to The Washington Post, the city performed nearly 15,000 partial replacements between 2004 and 2008, replacing lead lines until they reached private property. “And so this is actually creating a long-term problem in that the city's records indicate there's no lead pipe,” Edwards adds. “You've also disturbed the lead pipe and you’ve connected it to copper, and actually you've left the situation worse than you found it, in many cases.”

Eventually, he says, Washington, DC “spent $100 million, actually increased the incidence of lead poisoning, and found more lead pipes than they'd ever imagine. And they just gave up.”

Meanwhile, cities like Madison, Wisconsin, and Lansing, Michigan, have successfully removed their lead service lines. Edwards notes that in Lansing, the city owned the entire water line leading to homes. “That was one advantage they had to getting all of their lead pipes out of the ground.”

And according to Smith, other cities like Kalamazoo, Michigan, are testing for lead more stringently than before. “They're actually verifying that they are testing the homes that they're supposed to,” she says. That means sending people into homes to physically check water lines, rather than basing information on records or dates of construction.

For anyone concerned about lead pipes in their city or home, Edwards says to check online for tips on identifying pipe materials. “The one thing you can be sure of if you have a lead pipe coming into your house, you have a very significant health risk,” he says.

“What you can't be sure of, is, if you have a copper or galvanized iron pipe coming into your house, that there's a lead pipe somewhere out there that you don't see. And so for that, you need the city to come and usually dig a hole in your yard, unfortunately.”

And for immediate protection, Edwards recommends that consumers worried about lead install a filter on their faucet.

“It cleans the water that passes through all the lead pipes, and there's no chance that the water will get contaminated after it flows from the faucet into your cup or cooking utensil.”