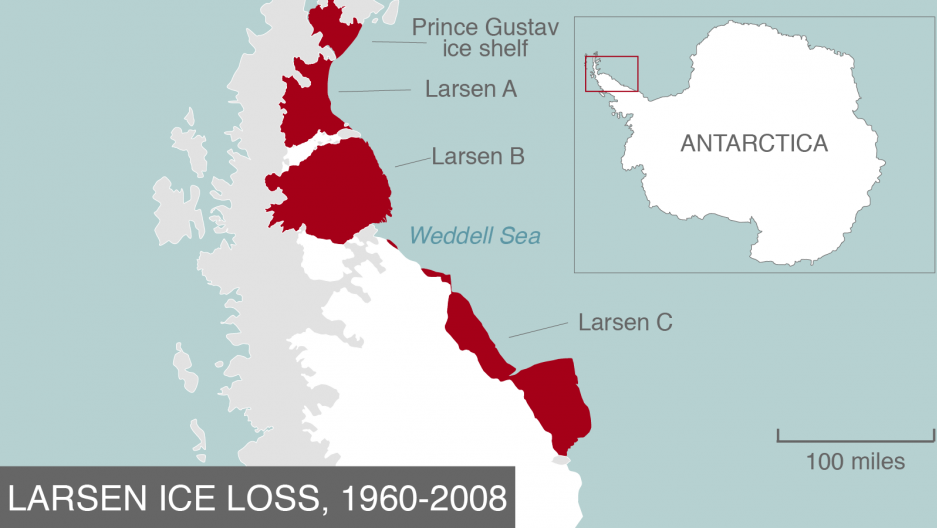 Imagine Delaware cracking off of the eastern seaboard of the United States, breaking up into little pieces and floating away.

That’s roughly what Antarctic researchers are expecting to see as they watch a rift grow across a huge patch of ice called Larsen C, part of the globe’s fourth largest ice shelf and one of the most quickly-warming areas in the world.

The rift on the ice shelf attached to the northernmost part of the Antarctic Peninsula first appeared in August 2014 and has been growing steadily, including more than 17 miles since December of last year.

When the huge chunk of the shelf finally breaks off — and researchers are all but certain it will — it will be one of the largest ice calving incidents since they began studying ice shelves around the southern continent two decades ago.

Watch the rift grow across the Larsen C. By January 2017, it was more than 90 miles long. (Source: Project MIDAS)

Two other stretches of the Larsen shelf — Larsen A and Larsen B, located just north of Larsen C — collapsed in 1995 and 2002.

The Antarctic peninsula is the first area in the region to show the clear impacts of climate change and scientists have used it to study what further impacts of warming might be elsewhere on the frozen continent.

But they say it’s too early to blame this new rift on Larsen C on climate change.

“It’s less clear what’s happening on Larsen C is climate change,” says Martin O’Leary, a researcher at Project MIDAS, which has been monitoring the rift since it was first spotted. “We don’t have any evidence it will break up the way A or B did. We haven’t really observed a big one like Larsen C properly.”

The Larsen-C rift opening over the last 2 years from #Sentinel1 pic.twitter.com/MT9d3HAw1M

The rift now spans 90 miles and is expanding quickly.

“There’s a sort of runaway effect,” O’Leary said. “The bigger the rift gets, the stronger the forces are on the loose bit and then it starts to grow faster and faster.”

It’s sort of like a lever — the longer the crack gets, the more leverage the breakaway chunk of ice exerts on the section that’s still attached to the rest of the shelf.

The rift formed from one of many cracks that are common in the softer sea ice at the edge of the shelf and then penetrated the harder glacial ice closer to shore.

“If you look at the south end of the Larsen C, you’ll see loads of cracks coming in from the side,” O’Leary said. “For some reason in 2014, this one broke through. We still don’t know exactly why.”

When Larsen B collapsed in 2002, satellite images were able to record the disintegration and scientists could observe like never before.

Warmer air turned melt pools into lakes on both Larsen A and B, while warmer sea temperatures eroded the shelf from below.

The melting on Larsen is not yet contributing to rising sea levels. When the ice shelves disintegrate into the ocean, sea levels do not rise because the ice shelf is already floating atop the ocean. But the shelves act like barriers for glaciers behind them, and when the shelf is gone, those glaciers can move into the sea and that triggers higher sea levels.

Science in the Antarctic is still relatively new, and the processes are extremely complex, so there’s a lot scientists are still learning.

“I don’t think we have a clear sense of whether this is a periodic calving or an unusual calving event,” explains Christopher Shuman, a researcher at the Cryospheric Sciences Laboratory at NASA’s Goddard Space Center. “We don’t know for sure whether this is just a long recurrence period” — in other words, part of a longer natural cycle — “or whether this is a direct link to the kinds of changes we’ve seen farther to the north.”

Research shows several icebergs dropped off the Larsen B shelf before it began to experience the melt that caused its collapse.

Scientists have been able to map the loss of ice on Larsen back to the 1960s. When Larsen B collapsed in 2002, scientists watched as warmer air turned melt pools into lakes on the surface of both Larsen A and B, while warmer seawater temperatures eroded the shelf from below.

“The Larsen ice shelf is essentially the fragile fringe on the part of Antarctica that’s warming up the most quickly,” Shuman explains. “It is reacting in the way we would expect it to react” to that warmth, he says. “First the shelves — they get melt ponds, they get big bergs — then they drop off, the glaciers accelerate.” 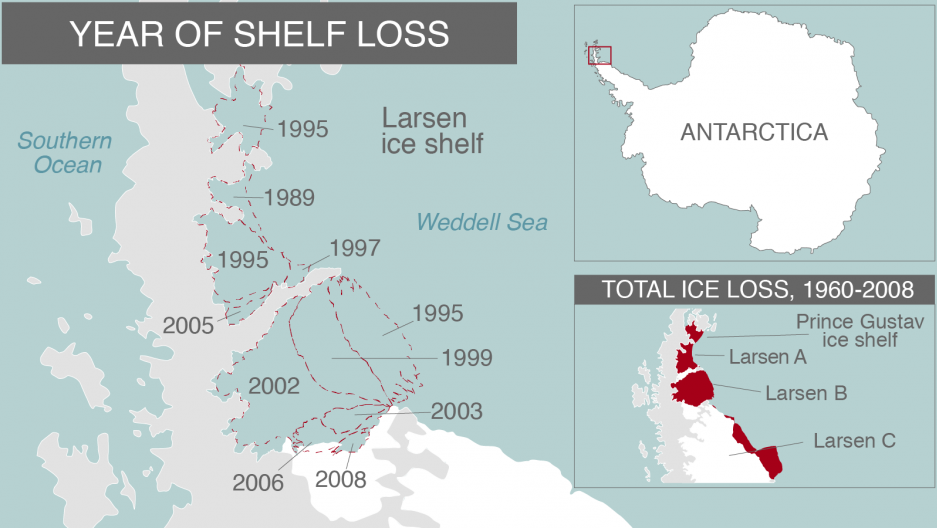 The map above shows ice loss around the Larsen B ice shelf, which is just to the north of Larsen C. Large pieces of the shelf melted in the years before it collapsed in 2002. (Source: USGS (I-2600), Cook and Vaughn, NASA.)

And scientists say that Larsen C could yet follow the path of Larsen B.

“The Larsen B did have several large icebergs break off, similar to the Larsen C, in 1995 and 1999,” Erin Pettit, a glaciologist at the University of Alaska Fairbanks, explained in an email. “But these events ‘primed’ the ice shelf — left it in a weakened state — for what followed.”

Pettit also points out that while many eyes are watching the Larsen C rift, the remains of Larsen B may completely disappear during the rest of February, which is Antarctica’s summer.

Melting on Antarctica is of grave concern for the rest of the world given the immense amount of ice that could potentially melt into the ocean and raise sea levels around the world dramatically over the next few hundred years.

NASA says that melting in some sections of West Antarctica, west of the peninsula, may have already "passed the point of no return," with the potential to raise sea levels four feet by themselves.

All the melting on Larsen is not yet contributing to rising sea levels, though. When ice shelves like Larsen disintegrate, sea levels do not rise because the ice was already floating atop the ocean.

But the breakup of the shelves could eventually lead to higher seas because they act like barriers for glaciers on land behind them. When a shelf is gone, those glaciers can move into the sea more easily, and that triggers higher sea levels.