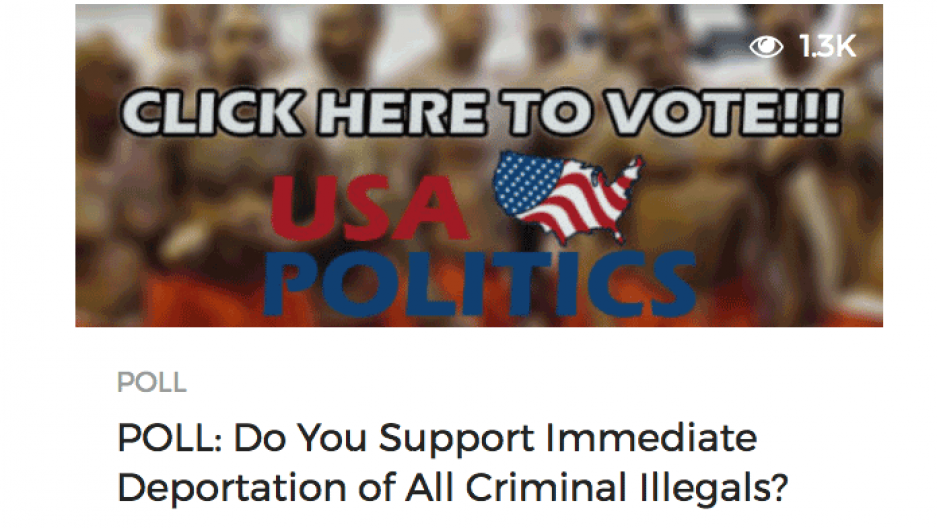 A poll posted on USAPolitics.co, one of the fake news sites started by teenagers in Veles, Macedonia.

The tiny Balkan state of Macedonia, with a population just a quarter the size of New York City's, received an outsized spotlight in Western media last fall.

The teens were happy to convert clicks to spending money, and ambivalent about the political outcome.

But their adventure in viral fake news ended up being so powerful that many have wondered if it helped swing the US election in Trump's favor.

Saska Cvetkovska, an investigative journalist based in Macedonia's capital city of Skopje, wants to do anything she can to stop the flow of false information online.

“It looks like an endless battle, but I don’t really think it is unwinnable,” she says.

Cvetkovska is a reporter and editor with the digital publication NOVA TV. It’s a pro-opposition outlet that was formed when her original employer — A1 TV — was shut down in 2011 under government pressure.

Motivated by that incident, Cvetkovska and two colleagues developed Mediapedia, a searchable online database revealing the ownership behind online news outlets in Macedonia.

The project drew attention and awards when it was released in 2013.

But Cvetkovska says that facilitating transparency has gotten much more difficult since then, because facts are facing ever-more competition online from misinformation.

She cites the teenagers in Veles as an example of how easily anonymous fake news passes as credible.

“You can make a fake news site, and you can pay 25 f-cking dollars per year [for a private domain] and your data would remain hidden. And then, you are a [news] organization.”

Currently, Cvetkovska and her colleagues are working on an extension for the Chrome web browser, based on what they did with Mediapedia, that would give the reader information about the origins of a news story on the internet.

She hopes this will tackle part of the problem of detecting trustworthy news online.

But the battle cannot be won by the media alone. Cvetkovska places responsibility with governments and technology companies as well.

That attitude is seconded by Alexios Mantzarlis, who leads the International Fact-Checking Network at Poynter. He agrees that the fight against fake information needs to include the efforts of private companies.

But Mantzarlis emphasizes that all three parties — technology, media, and the reader — have an important role to play.

“I think this is a battle that requires the tech companies,” says Mantzarlis. “[But] media houses have more to do to explain the process of fact-checking and verifying a story. And the reader and consumer should also be having a responsibility.”

He maintains that the source and intent of false information makes no difference in the job that needs to be done.

"Whether a teenager in Veles, or an authoratitve government somewhere, the method to verify stays the same."

Both Mantzarlis and Cvetkovska warn against viewing the problem of fake news as either new, or as a product of the Trump era. It's been going on in Eastern Europe for "many, many years," Cvetkovska says.

But she wonders if the issue of fake news in Trump's election was kind of a good thing.