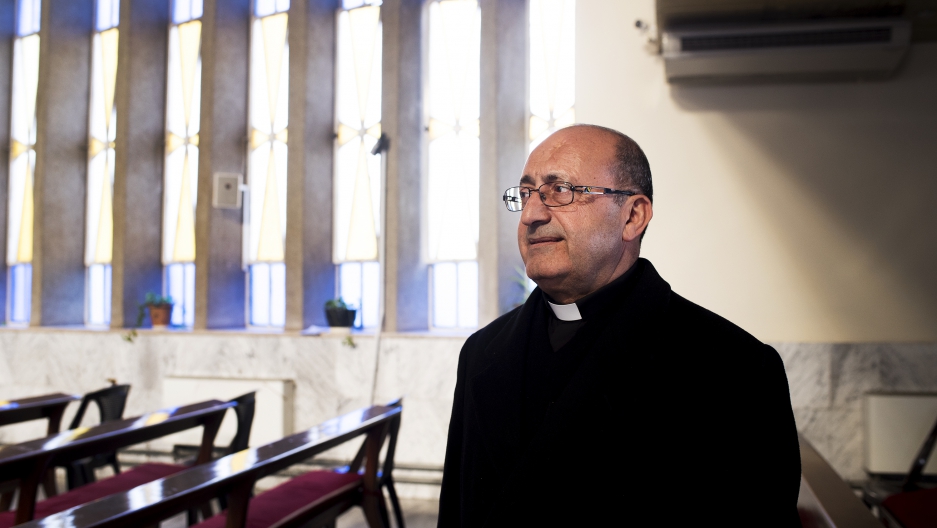 Father Khalil Jaar, a priest at the St. Mary's Church in Marka, has spent the last few years housing refugees from Mosul inside the church. Back in 2014, his old office was converted into sleeping quarters for families moving through the church.

When Father Khalil Jaar first arrived at St. Mary’s church in 2014, he had a lot of free time on his hands. He didn't feel as useful as he did back in his last parish.

"I was asking myself and my Lord, 'Why [did] you send me here? Because there is nothing to do,'" he recalls, sitting at his office in the city of Marka, 15 minutes outside of Amman, Jordan.

But his boredom didn't last long. Shortly after he joined the church, a wave of Iraqi refugees came to Amman. They were mainly from Mosul, the Iraqi city that had fallen to ISIS.

That was when Father Khalil found his calling.

“I started receiving them, giving them shelter, protection, attention and the most important, to give them love,” he explains. “I opened my church, my house, the school, everywhere.”

The arriving families were traumatized. Yes, they were lucky to have escaped the brutality of ISIS, but their pain was fresh.

Father Khalil recounts a story of how one night after they had all eaten together, he and the families heard the sound of an airplane taking off from a nearby airport.

“When the children heard the [sound] of the airplane, they [thought] this is an attack,” he says, “so they started crying and looking for shelter [under] the tables, the chairs and the beds.” 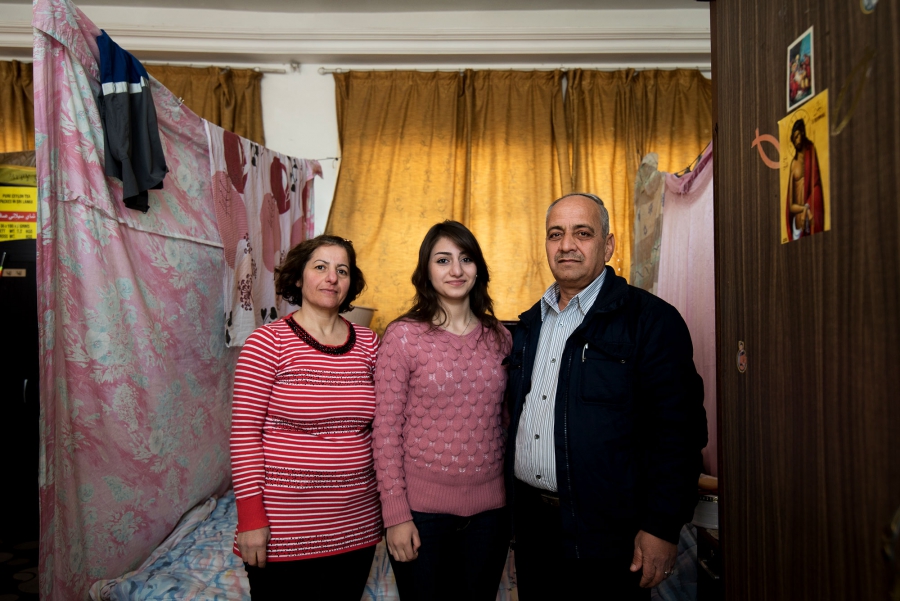 Mosul residents Shatha Gabrail, 50, and Numair Faisal Elyas, 56, pose with their daughter Merna in the curtained-off space in the St. Mary's Church where they've lived for over two years. Still searching for concrete resettlement options, Elyas said the family's future plans remain uncertain. "We feel all the world has forgotten about us," he said.

When I visit, his wife, Shatha Gabrail, is busy chopping cucumbers and tomatoes to make a salad.

They live in a space on the second floor of St. Mary’s. It used to be a communal area, where events for children were held. Today, it’s home for the Elyas's and another Iraqi family.

Curtains separate the makeshift quarters. Laundry hangs to dry on clotheslines. There's one bathroom next to a kitchen down a hall.

When ISIS first entered Mosul back in 2014, the Elyas family didn't leave the house for four days, out of fear. And their fear was reasonable. 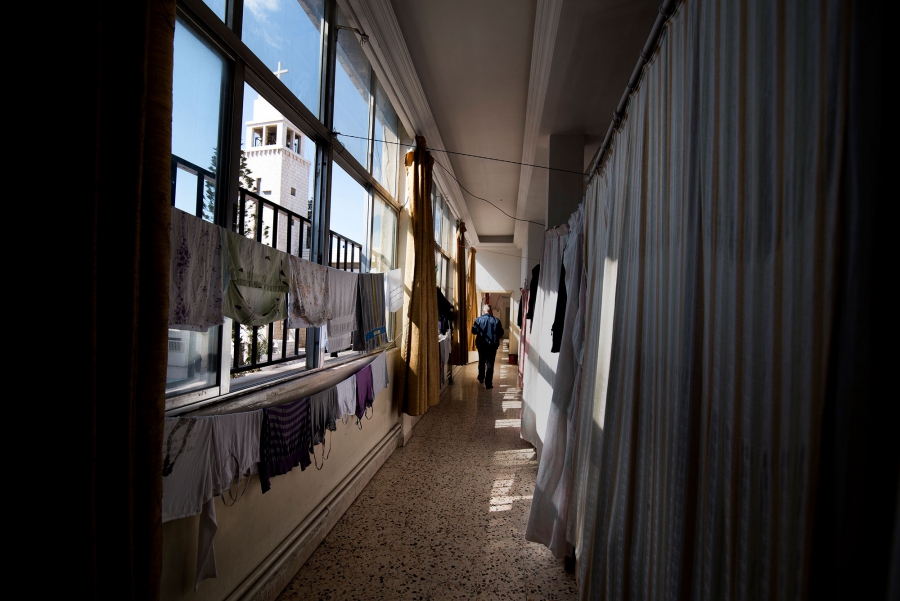 Numair Faisal Elyas makes his way down a corridor of the St. Mary's Church in Marka. The father of three has lived in the church hall with his family since August 2014.

The family, who is Christian, was terrified. They hastily packed whatever they could. With the help of a neighbor, they managed to get through ISIS checkpoints.

“This was a shock,” Elyas says. “This is my city, my grandfather’s city from long time ago. We, Christians, were there even before the Muslims. I never expected that they kick us out from the city. But that became a fact.”

A Christian aid group helped the family get to Jordan. Elyas says if it wasn't for Father Khalil's church, they would have had no place to live. He thanks Father Khalil and calls him “a man of peace.”

But more than two years of life in a temporary space has left Elyas wondering whether his family will ever have a permanent home of their own.

He has three daughters, 14, 18 and 20 years old. They haven't been to school since they left Mosul. What will become of their future? he asks, lighting a cigarette and shaking his head.

Down the hall from the Elyas family lives Ghaida Hekmat. She's also a Christian from Mosul. 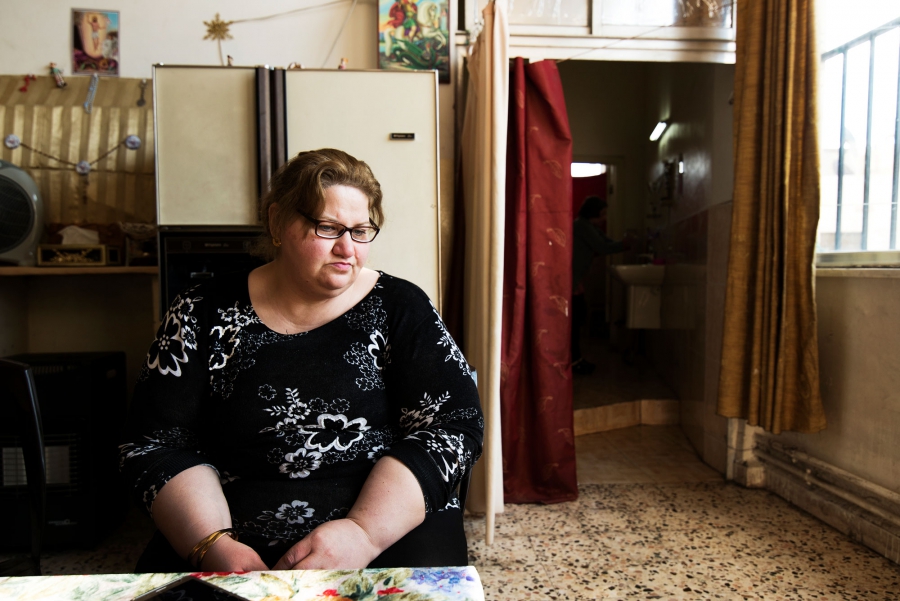 Ghaida Hekmat is the only one of her family still waiting at the St. Mary's Church. With her husband, another Iraqi from Mosul, already living in America, Hekmat was in the process of being resettled when President Trump's immigration ban went into effect.

Hekmat says her husband, who's also her cousin, lives in the US. They got married two and a half years ago. She shows me a picture of their wedding day on her cell phone.

Hekmat was supposed to join her husband earlier this month. She had an interview at the US embassy on Feb. 6.

Then came President Donald Trump's executive order that put a temporary ban on all refugee resettlement in the US. Hekmat's interview never happened. She was heartbroken.

"I lost everything in Iraq," she says. "I am vulnerable here. I don't understand why my case hasn't been approved."

Hekmat and her husband speak several times a day. Through my translator, I ask her what it's like living so far away from her husband.

"Very hard," she says, breaking down in tears. It's been even harder for Hekmat since other members of her family left. Her brother and mother used to live with her, at the church. But recently, they resettled in Australia. Now, she's here by herself, her family scattered. 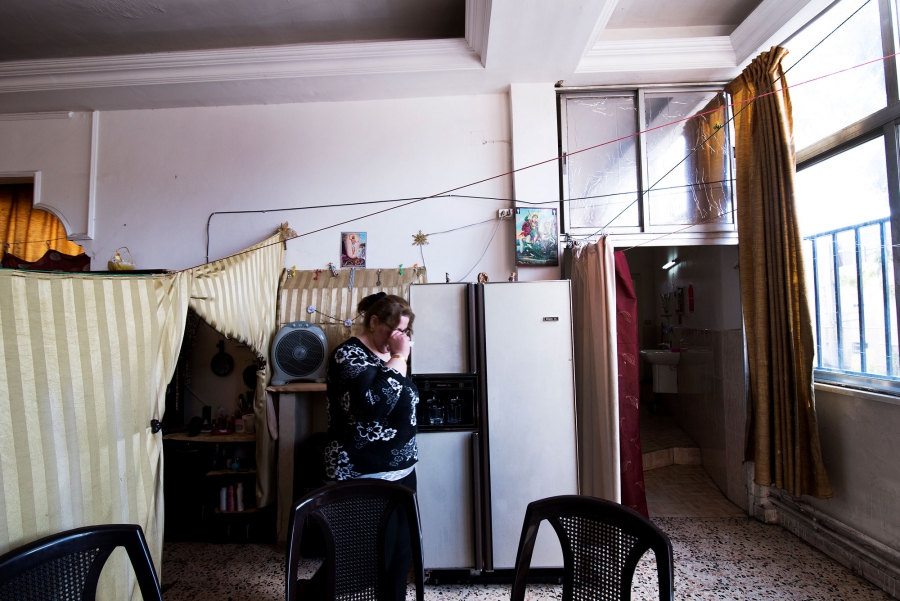 Ghaida Hekmat and her sister were among the first Christian refugees to arrive in Amman after the ISIS takeover of Mosul. Today, she's one of only a handful of people still living at Marka's St. Mary's Church awaiting resettlement abroad.

Father Khalil's church holds mass every day. He says it's a good chance for the community to get together, that it helps boost morale.

Meanwhile, the refugees keep knocking on his door. The latest family came from Iraq just last week. Their teenage son almost died in Iraq. ISIS had poured fuel on him and set him on fire. He survived, but barely. Father Khalil says he is looking to see if he can send the teenager to another country for treatment.

Over the past few years, word has gotten around about Father Khalil and his sanctuary church. "So many people, when they arrive [at] the airport or [at] the border, they already have my address and my telephone. So when they get to Amman, they call me."

And of course, he doesn't hesitate to take them in. 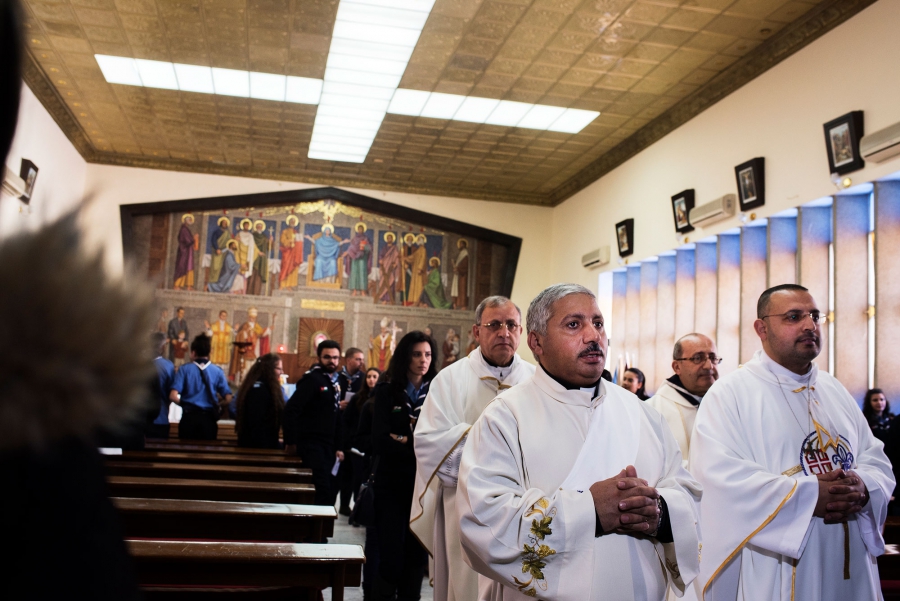 A congregation of Jordanian priests gather for a ceremony at Marka's Latin Church, in the outskirts of the capital Amman.

Father Khalil, who's Palestinian, says these families remind him of his own.

“I used to be a member of a refugee family,” he says. “I know what that means. When we [left] our home in Bethlehem, we left everything: Our relationships, our love, my school, my church, my friends.”

So, he says, he wants to do whatever he can to help.

“When I give some help to these families, I tell them please don’t be humiliated, OK? It’s my duty to help you,” he says. “In the future, you will be ready to help others.”