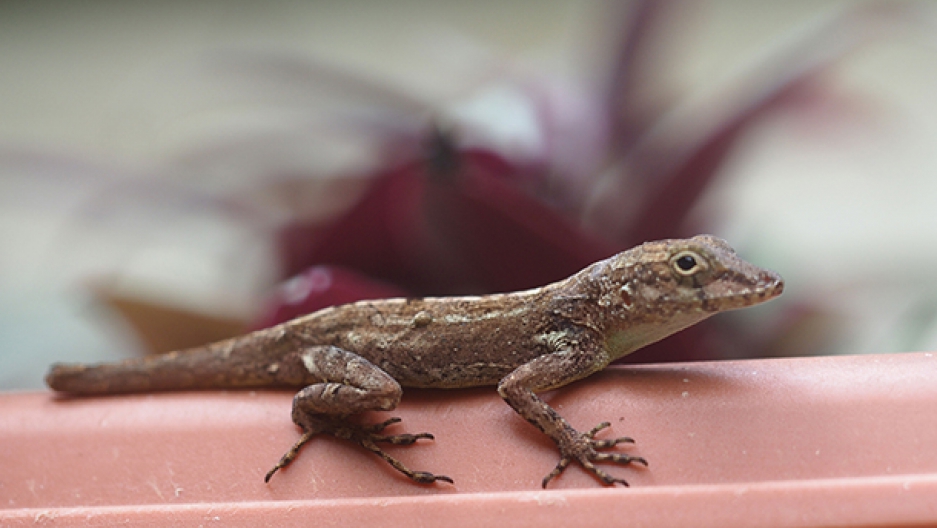 An urban anole lizard in Puerto Rico is pictured here.

We tend to think of it as an achingly slow process, spanning hundreds, even thousands of years. But scientists studying crested anoles — little lizards native to the forests of Puerto Rico — say that urban-dwelling anoles are adapting to their built environments much more quickly than that.

“The youngest populations we've studied have not been exposed to urbanization for more than 30, 40 years,” says Kristin Winchell, a Ph.D. candidate at the University of Massachusetts Boston.

That’s enough time for 100 or more lizard generations, she says, because anoles can reproduce year-round. And urban-dwelling crested anoles seem to have wasted no time going through some remarkable changes. “We set out with the idea that the anole lizards are persisting in these urban habitats, they’re subject to the natural selection pressures that exist in these habitats,” Winchell says.

Specifically, Winchell and her colleagues wondered whether crested anoles — lithe natural climbers known for “perching” head-down on the trunks of trees — were adapting to slick urban challenges like painted walls or glass windows. They dug in, studying crested anoles in both natural and urban settings.

“We set out looking specifically at the toepads and the limbs, the limb length … with the hypothesis that in urban areas, [anoles] tend to be perching on things like walls that are very broad,” she says. “The habitats tend to be very open, they have to run across very large areas. And they're perching on things that are very different from a tree.”

Crested anoles’ fabulous grip comes from toepads covered in flaplike scales called lamellae. “Each one of these little flaps, because there's so many of them, allow the toepad to kind of mold around a surface and really make as much contact as possible,” Winchell says. What’s more, she adds that the scales are covered in microscopic hairs, called setae, which interact with the surface for even more adhesion.

Researchers found that in urban habitats, crested anoles not only have more scales on their toes, but they have larger toepads. “This was in line with what we predicted, because these things have to do with increased adherence,” Winchell says.

For Winchell and her team, the findings indicate that natural selection is taking place. Now, they’re testing whether these “stickier” toepads and longer limbs (another trait exhibited in urban crested anoles) mean the lizards actually perform better in urban environments.

“We [had] our own little anole 'Grand Prix' over the summer, where we raced animals up various tracks: metal, painted concrete, bark,” Winchell says. “We have over 1,000 videos of anoles running in slow motion up racetracks.”

Another revelation about urban crested anoles: “This is very much a work in progress, but the urban animals do seem to be able to tolerate higher temperatures,” she says. “And so that's really interesting, and we're also looking at the gene expression patterns behind that, as well.”

But not all species of anoles do so well in urban areas, and Winchell says that’s a topic she wants to address in future research.

“There are many anoles that use urban habitats, and we're currently working on a project to try and understand why some species thrive in urban areas, while others are merely tolerant and some stay out of it entirely,” she says.

It’s another research question in a growing field of inquiry. “People have found that there are shifts in thermal physiology in [urban] ants,” she notes. “There are some researchers in New York who are doing … really great work on the birds and the rats living in New York City, and they're finding some very interesting things there, looking at the genomic aspect of urban tolerance.”

That is to say, we may eventually think of packed, noisy urban areas as something else entirely: ground zero for fast-paced animal adaptations.

“If you were to look at all animals in urban areas, you'd probably start to see some trends,” she adds, “especially at the genomic level, of shifts in the ability to tolerate stress and tolerate heat and tolerate noise, perhaps.”

This article is based an interview that aired on PRI’s Living on Earth with Steve Curwood.