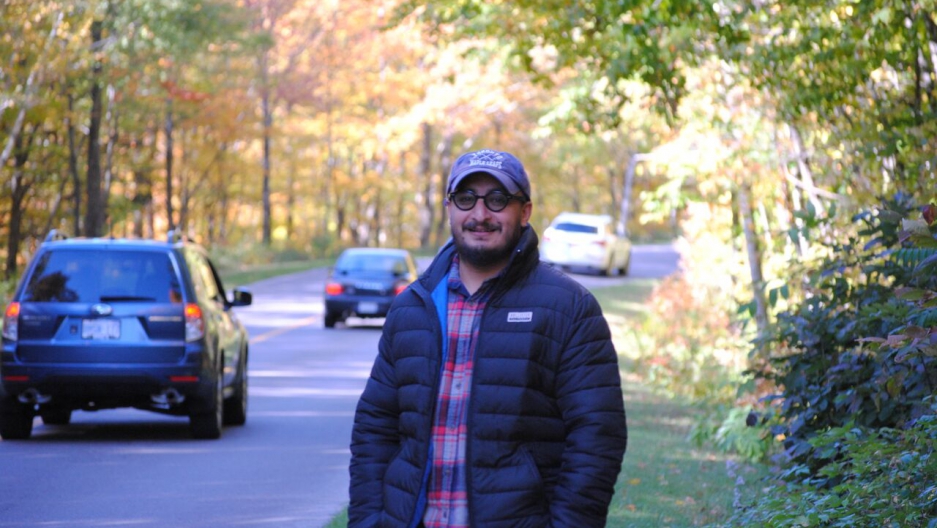 Afghan journalist Habib Zahori made a cold trek across the US-Canada border on foot and on bicycle. "I remember thinking, wishing, 'Oh God, please, please send someone to arrest me!’ "

Habib Zahori was deep in the forest, his face and fingers going numb. He was lost, freezing and growing desperate by the hour.

Like hundreds of refugees, Zahori was risking his life to sneak into Canada.

But Zahori was not fleeing some war-torn country. He was running away from the US.

Zahori worked as a journalist back in Kabul, Afghanistan, and his reporting on the war made him a target. In 2014, he came to the US for graduate school. And as he was preparing to go back home at the end of December 2015, he received a phone call from his mom. She said he was getting death threats and his life would be in danger if he returned.

At the time, the US was heading into a presidential election year, with Donald Trump as the leading Republican candidate. Zahori says a surge in anti-Muslim rhetoric in the US scared him. He was worried about what would happen if he tried to stay in the US — so he decided to flee to Canada.

He bought a small, beat-up bicycle, and a friend drove him to the border town of Houlton, Maine.

When they got to an unmanned area, Habib said goodbye and started pedaling toward the forest.

“When I reached those woods, I got off my bike and I started walking into the woods.

And there were these piles and piles of snow everywhere. I’d never seen that much snow, that high.

I think I was the only living thing walking there, with my bicycle… like, pushing my bicycle.

And I couldn't see anything.

The other thing was that I’d read this book when I was still in Afghanistan: "Into the Wild."

[It’s] the story of this American, a young American guy, who just decided to go to Alaska, away from "civilization." And he ultimately died there. That book made me scared of snow, of trees.

And as I was biking, images from this book [just kept] coming to me.

[At one point], I was deep in my thoughts and I suddenly heard dogs barking: Five, six dogs just started chasing me. I don’t think they ever saw a guy on a bicycle before.

But the good thing was that I was on the steep point of the road and I let the bicycle take me as fast as it could. And that was the only way that I managed to survive that dog chase.

And I remember thinking, wishing, ‘oh God, please, please send someone to arrest me!’ You know, I was ready to be even deported or go to jail. I just wanted that misery to end.

[That’s when] I heard the siren. And then I saw the police car.

I immediately stopped, just got off my bicycle and I raised my hands. And they arrested me.

And they put me in the back of their car.

I remember thinking that I was thirsty. I was so thirsty. My mouth was like a dry wood. And I couldn’t swallow even.

I felt so relieved. I felt so so relieved that finally I was somewhere warm and that I was safe.

When my friends hear my story, they ask me why did I do it? And they ask me if I would do it again if I have to.

And I tell them, ‘Hell no! I will never do that again.’

That was one of the worst days of my life. And I'm someone who grew up during a civil war. Then the Taliban. Then the Americans. And I've seen so much. But I've never felt as miserable as that day.

But I was so desperate.”

Habib Zahori is now living in Ottawa. He has been granted asylum in Canada.