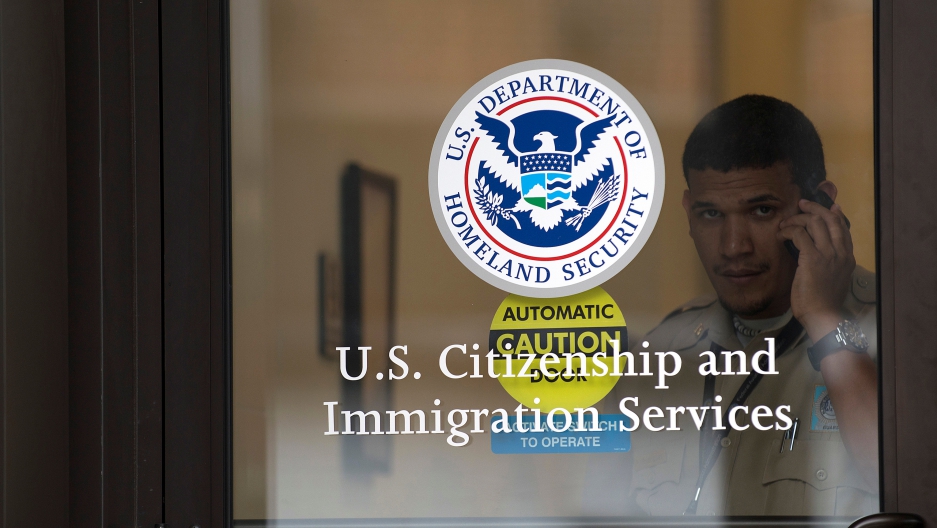 A security guard looks out of the US Citizenship and Immigration Services offices in New York, on Aug. 15, 2012.

Crackdowns on immigration from the Trump administration have caused fear and elicited public backlash in recent weeks. But is the administration simply implementing existing law in a more aggressive way?

The answer is "unfortunately complicated," says César Cuauhtémoc García Hernández, an assistant professor at the University of Denver Sturm College of Law.

"They are certainly basing their enforcement strategies in existing law," he says, "but there is no shortage of legal challenges that can be made to a large number of the enforcement tactics announced in [Secretary of Homeland Security John Kelly's] memos, as well as the president's executive orders."

The tactics outlined in Kelly's memos include deporting undocumented immigrants to Mexico regardless of the migrants' nationalities, and seeking expedited removal of these immigrants — meaning no court hearings, no due process.

“Underlying all of this is constitutional law, which of course no president can alter unilaterally,” says García Hernández. “I fully expect to see constitutional challenges lodged against some of the strategies announced in the memos and executive orders. For example, depending on how it is applied, changes to expedited removal could see lawsuits claiming that the Immigration and Nationality Act as well as the Constitution's Due Process Clause have been violated.”

The professor says the Trump administration is testing its immigration enforcement powers, in a way, and ultimately the courts will decide whether the executive branch — and DHS — can do what they have outlined.

The new policies also take a stronger line against parents who arrange to have their children brought in to the US.

This may hit Central American immigrant parents in the US particularly hard, as they have increasingly paid to have their kids brought up from countries like Honduras, El Salvador and Guatemala — nations with some of the world’s highest violent crime rates — to find safety in the US.

One of the DHS memos states that those immigrants who have paid smugglers may now face criminal charges and deportation.

Immigrant rights and refugee groups have denounced the shift in policy, but so have people within the government’s immigration system itself.

“They are doing what they can for their kids to come up,” says an immigration officer who has heard people seeking asylum being interviewed. He asked for anonymity because he was not authorized to speak publicly.

“What these parents are doing is responding to extreme violence in Central America, and the numbers of people crossing the Mexican border is causing stress on our immigration system and has thrown things out of whack. But it’s a humanitarian crisis, and it’s not being treated as such. We hear a lot about Syria and Syrian refugees, but Central America — that’s the US refugee crisis.”

Charles Kuck, an Atlanta-based immigration lawyer and former president of the American Immigration Lawyers Association, says "this is about scaring people."

He also expects legal pushback against the orders to be fierce: “We saw lawyers on full attack mode against the travel ban. I think we will see the same here, efforts to slow deportations to a crawl.”

Kuck’s firm also works with several Central American families with mixed status, with parents who paid to have their children brought to the US.

He says that some parents he has talked to say that, if facing deportation, they will go, but leave their children behind.