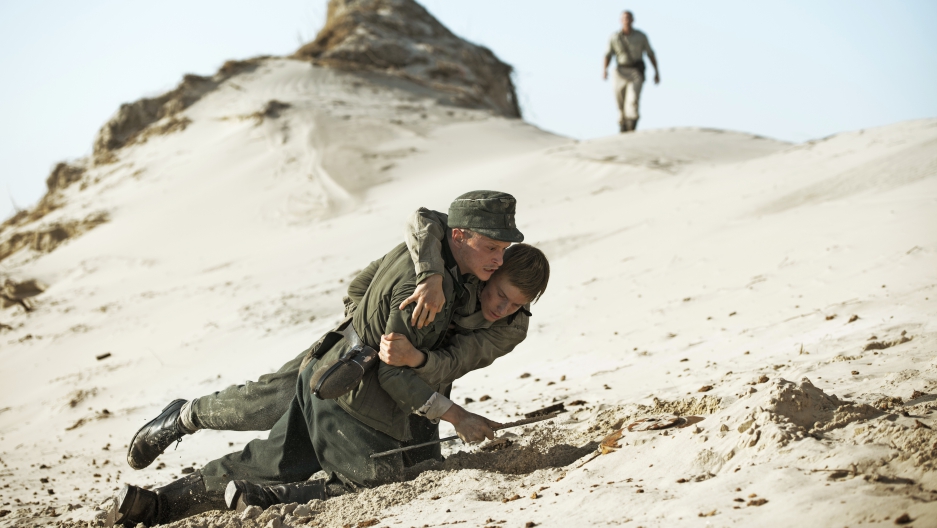 Joel Basman as Helmut Morbach and Louis Hofmann as Sebastian Schumann in the Oscar nominated movie, "Land of Mine."

Every country wants to show the world its good side. But there's always a dark side it doesn't want to let out. That's the motivation behind the Danish film "Land of Mine," one of five nominees for best foreign language film at the Oscars this Sunday.

"I wanted to show Denmark's true face," says the movie's director Martin Zandvliet. He knew there were a lot of hidden stories in Danish history, but when he stumbled across the stories involving German boys, he knew he had the makings of a film.

Soon after the end of World War II, in the mid-1940s, Denmark used German teenage boys sitting in prison camps along the border between the two countries — POWs — to dig up and defuse land mines planted by the Nazis.

Zandvliet says his research revealed around 500 teenagers died doing the work, while between 900 and 1,000 were maimed.

"It was the Brits who gave the Danes the order to use the Germans and of course, the Danes didn't mind," he says. It was acceptable at the time to hate Germans, following five years of being occupied by Germany. "I think we ... wanted to get back at them. Denmark and Germany have always had a strange relationship because we're neighbors."

The movie focuses on a fictionalized Danish sergeant who at first mistreats the teens doing demining work. Then, he realizes they're not that different from him.

"He's a fictional character who is the very worst of what the humans can be and evolves into, what I believe, we should have done," the director says.

This is a story rarely told about Denmark. "It's not one of our finest moments," says Zandvliet, who adds that he's received hate mail calling him unpatriotic.

But patriotism isn't exactly what he was going for, anyway.

"That's not what this is about. It's really about how people should treat each other ... as individuals, instead of hating and judging ... because when the world is built up on hate and fear, the 'eye for an eye' mentality doesn't help anybody."