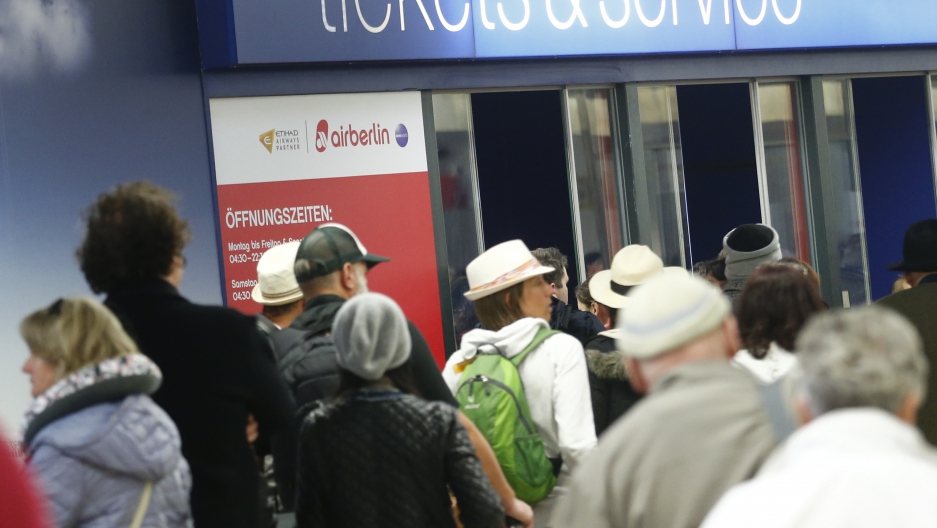 People line up in front of a ticket counter during a warning strike at Tegel airport in Berlin, Germany, on Feb. 8, 2017.

On Saturday morning in a hotel ballroom in Boston, women and minority scientists schmoozed over scrambled eggs and fresh fruit at an awards breakfast from a foundation aiming to diversify the sciences.

As the crowd tucked into their breakfasts and turned their attention toward the stage, four female engineers accepted awards for their research given out by the Elsevier Foundation and the Organization for Women in Science for the Developing World.

But one of the winners was missing.

“I didn’t know, if I decided to go, what [would] happen in the next few days,” Mokhtar says.

President Donald Trump’s executive order barring travel to the United States from Sudan and six other Muslim-majority countries has been suspended by a federal court.

But Mokhtar worried that new restrictions would be issued while she was in the United States or while she was en route from Sudan.

The event was part of the annual meeting of the American Association for the Advancement of Science, one of the largest general science gatherings in the world. The AAAS says Mokhtar is one of five scientists who skipped the conference due to the immigration order. Another is Sudanese physicist Mohamed Hassan.

“It was very clear that people like me are no longer welcome to visit the United States,” says Hassan, head of The World Academy of Sciences, which works to advance science in developing countries.

New US immigration policies have upended travel plans worldwide. But at this weekend’s scientific conference in Boston, the ban was seen as a problem not just for people but also for the pursuit of knowledge.

“Any restriction on communication interferes with the good practice of science,” says Rush Holt, a physicist, longtime congressman and CEO of the AAAS.

Holt argues that even in the internet age, there’s no substitute for scientists being in the same room together.

“That’s often where you make your collaborative connections, you find people who have a technique you could use in your experiment, and you talk about how that technique would work,” Holt says. “That’s something that only happens in person.”

Scientists sit in on talks given by colleagues in different disciplines, Holt says, asking questions “that could change the direction of your research.”

With just a handful of immigration-order-related absences, the AAAS conference went as planned and organizers say more than 10,000 people attended.

But talk of changing US immigration policy and how it might impact science was still a topic of conversation.

One Middle Eastern scientist says she packed only one bag to make it easier to get home if she wasn't allowed into the United States.

Other researchers say they worried about the fate of their foreign-born colleagues.

Neurologist David Schnyer, who studies mental illness and brain trauma at the University of Texas at Austin, says he just lost an Iranian applicant for a hard-to-fill position in his lab.

“He wrote me that the position interested him very much,” Schnyer says, but because he was Iranian, he “felt like he didn’t want to pursue something in the US at that time.”

Schnyer says there aren’t many people qualified for the postdoctoral position he’s looking to fill, which requires specialized neuroimaging skills.

“It’s disappointing,” Schnyer says. “I’m just not in the habit of worrying about where someone is coming from as much as are they a good scientist.”

And all six of the 2016 American Nobel prize winners were immigrants.

Schnyer says for people like him trying to find qualified researchers, fallout from the suspended immigration ban is just a nuisance for now.

But scientific leaders worry that further restrictions could leave US research labs understaffed and keep top talent out of the country.

Scientific researchers were among those stuck in their home countries after President Trump's executive order was issued in January.

“Albert Einstein would have perhaps been unwelcome in today’s climate,” says AAAS CEO Rush Holt. “Would that have been a good thing if Albert Einstein had been denied access to the United States for the last 25 years of his life?”

The United States has long been seen as a destination and a haven for the brightest minds in science.

Now, scientists are wondering how long that will remain true.