Participants in a 2002 event in New York hold signs representing each of the 10 World War II-era Japanese American concentration camps. Tsuya Hohri Yee holds the sign for Manzanar, where her family was incarcerated during the war. She says President Donald Trump’s immigration orders have hit her hard.

Tsuya Hohri Yee’s family was once imprisoned by the US government. They were deemed a national security threat because of their ancestry. That’s why President Donald Trump’s executive order that targets refugees and certain immigrants hit hard.

“The news landed like a ton of bricks and my heart sunk realizing that other communities were to face what we faced 75 years ago,” Yee says in an email.

Yee is a 41-year-old New Yorker. Her Japanese American family members were among the 120,000 civilians of Japanese ancestry who were incarcerated in camps without trial or just cause during World War II. The imprisonment came by way of an executive order signed by Franklin D. Roosevelt on February 19, 1942.

Trump’s order, signed January 27, banned refugees and immigrants from seven predominantly Muslim countries from entering the US. It triggered a heated debate and, in its hasty implementation, chaos at airports. While some embrace the ban as a necessary step in protecting American national security, others are contesting its morality and legality in courtrooms across the country.

“With this order came swift resistance with thousands showing up to reject the ban — something that didn't happen for our community,” she says. “It's been inspiring to see people showing up and acting in new and collaborative ways.”

Yee, a fourth-generation mixed-heritage Chinese Japanese American, is co-chair of the New York Day of Remembrance Committee. The group is dedicated to preserving the story of Japanese American incarceration, and working to prevent other groups from suffering similar injustices.

“At its core, we understand the need for vigilance, the responsibility we all have as a group targeted by racism so specifically, to speak out and never forget,” says Yee. “We embody the reality that such a terrible thing could happen — it did.”

Yee is not the first in her family to use the memory of Japanese American incarceration as a springboard for activism. Her grandfather, William Hohri, was a civil rights activist and one of the lead plaintiffs in a 1983 class action lawsuit against the US government for injuries suffered as a result of World War II incarceration.

“He set the tone for our family in our position toward the internment — it was wrong, we should speak out about it at every opportunity,” says Yee. 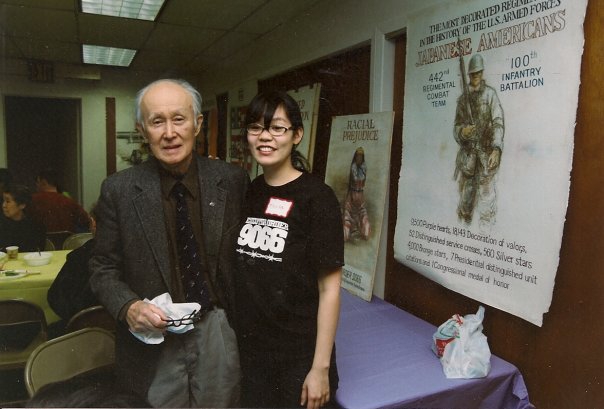 Tsuya Hohri Yee’s great uncle Sohei Hohri served as another source of inspiration. While incarcerated during World War II he volunteered at the Manzanar Children’s Village, an orphanage where parentless Japanese American children were imprisoned. He went on to become a beloved artist and librarian in New York, before passing away last year.

And generations of her family have done just that. Yee’s mother, Sasha Hohri, worked alongside activists Yuri Kochiyama, Akio Herzig-Yoshinaga and Michi Weglyn, and others to organize incarceration survivor testimonies for the Commission on Wartime Relocation and Internment of Civilians.

The stories they helped collect ultimately led President Ronald Reagan to sign the Civil Liberties Act of 1988, which granted monetary compensation and an official apology to those whose lives were upended. The law acknowledged that Japanese American incarceration was motivated by “racial prejudice, wartime hysteria and a lack of political leadership," not sound national security policy.

This month, Yee and her family are marking the 75th anniversary of the executive order that changed their lives. And they are joined by thousands of other Japanese Americans for whom the act of remembering their community’s wartime incarceration is itself a radical act.

Laura Hibino Misumi, 29, and Jessica Yamane, 28, know well the importance of that remembering. After watching Trump surrogate Carl Higbie call Japanese American incarceration a precedent for a Muslim registry on Megyn Kelly’s Fox News show last November, they felt they needed to reclaim that history and stand in solidarity with Muslim Americans.

They coauthored “We Remember,” equal parts open letter and call-to-action, to bring the Japanese American past into the present: “We remember having to sell a lifetime’s worth of the American Dream to the junkman for pennies on the dollar. We remember carefully packing beloved belongings to be stored in churches and bathhouses, promising a return that would never come."

"We remember lining up for the buses, child seen sitting on luggage, tag in lapel, apple in hand, not knowing where we were going."

"In a matter of months, all of us Nikkei had been forcibly removed from the West Coast."

"In the name of national security. In the furtherance of war.”

They close with a challenge: “How can we use our histories to thread together narratives of resistance and how can we elevate these dialogues from words to action?”

We’ve been here before: Historians annotate and analyze immigration ban's place in history

“A lot of pieces written about incarceration and other atrocities are written using the phrase, ‘Never forget,’” says Misumi, a Yonsei, or fourth-generation Japanese American. “‘Never forget’ is powerful, but the course of history has shown us that people do forget, and more importantly, many never even really knew enough to forget.”

“I felt like for those of us who do remember, and who do have a personal connection to these events, it’s so important to have the remembering be an active thing. To remember is an act of resistance.”

Laura Hibino Misumi and Jessica Yamane met at their orientation for Northeastern University School of Law. Here, they are making manju at a traditional Japanese New Year’s Celebration they attended together during their time at Northeastern. Years later, they stay close even though they’ve moved to New York and Los Angeles, respectively.

Members of Misumi’s family were temporarily incarcerated at Tanforan and Santa Anita detention centers, followed by longer stays at Topaz, Gila River and Rohwer concentration camps. Her parents met in the 1960s when they were both organizing in Japantown in San Francisco. They, like Yee’s mother in New York, later worked together to organize survivors to testify in support of redress.

Yamane describes herself as 100 percent Chinese, 100 percent Japanese and 100 percent American. Her grandfather served in the 100th infantry battalion during World War II. His best friend died in his arms on the battlefield, and he was one of only three men from his original company to return to the US. He suffered “intense psychological trauma” and, as a result, spoke very little about his past.

After the presidential election, connecting those historical dots has been even more important to Hunter College professor Jennifer Hayashida. When her “Nation, Self, and Asian Identity” class met for the first time after the November election, her students felt defeated. Some were even crying, Hayashida says.

But Mine Okubo’s classic graphic depiction of her incarceration experience was the next reading on the syllabus. The students were so moved by the parallels between Okubo’s story and present-day politics that they wanted to act.

In early December, her class travelled to Trump Tower in Manhattan and stationed themselves in the lobby as part of a “Learn As Protest” series of read-ins. Set against austere marble walls and Christmas decor, the class began to read in unison, bringing to life the pages of Okubo’s spare descriptions of loss and indignities in California’s Manzanar concentration camp.

“We were close to freedom and yet far from it. The San Bruno streetcar line bordered the camp on the east and the main state highway on the south. Streams of cars passed by all day. Guard towers and barbed wire surrounded the entire center. Guards were on duty night and day.”

A Trump Tower security guard mistook their words for chanting. Hayashida says he “couldn’t seem to wrap his mind around the fact that these Asian American students could be doing anything but engaging in what he saw as religious protest.”

The students were asked to move multiple times, but they kept reading as they walked. They eventually ended up on the sidewalk across the street from Trump Tower, where passersby stopped to listen and ask questions.

For many of Hayashida’s students and generations of Japanese American activists, remembering has indeed been radical act.

“I’m not sure how the protest itself really impacted onlookers in the lobby of the building or, later on, in the street, but I can say with confidence that it truly transformed some of the students,” Hayashida writes in an email. “Especially those who had never previously participated in any kind of social protest and who may have seen themselves more as bystanders rather than active participants in history.”

This piece was written in collaboration with Densho, a Japanese American public history non-profit based in Seattle, where Natasha Varner writes and blogs.