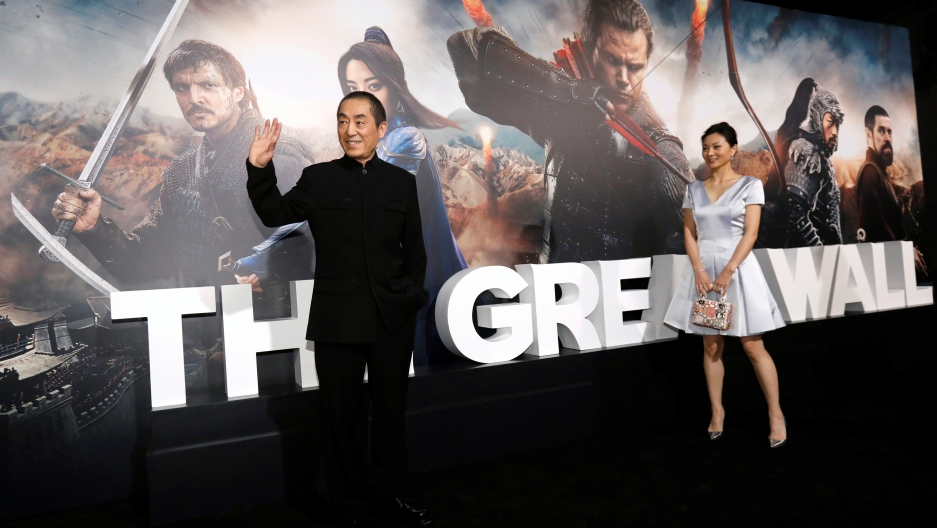 Director Zhang Yimou waves next to his wife Chen Ting at the premiere of "The Great Wall" in Los Angeles, on February 15, 2017.

China has the second largest movie box office in the world. So it’s no wonder that Hollywood panders to Chinese audiences and censors.

Marvel Studio cast Chinese superstar Fan Bingbing in “Iron Man 3” — even though they cut her scenes from the international version of film. The Chinese government saves humanity in “2012” and “Transformers: Age of Extinction,” and the heroes of “The Avengers,” in an act of flagrant Chinese product placement, use Vivo V3 phones.

Also: Hollywood is doing a crummy job of pandering to Chinese audiences

It would be easy to assume that Hollywood is always the panderer. But if there was ever a film where the opposite were true — where the Chinese film industry panders to Western audiences — it might look a lot like “The Great Wall.”

At least, Aynne Kokas thinks so. She’s a professor of media studies at the University of Virginia and the author of the recently published book “Hollywood Made In China.”

“The Great Wall,” a US-China co-production directed by Zhang Yimou, starring Matt Danon, and released in theaters today, is the most expensive Chinese film to date. Three of the four production companies that financed the film are Chinese-owned, says Kokas, which means that this film is actually China trying to enter the US market, rather than the other way around.

Other signs that it’s the Western audiences that are being courted: The film’s language (it’s mostly in English); the title (“They use the most basic possible reference to China. If you don’t know anything about China, you probably know about the Great Wall,” says Kokas); and the chosen genre (martial arts films have had a history of appealing to international audiences in a way that Chinese comedies, for instance, have not). 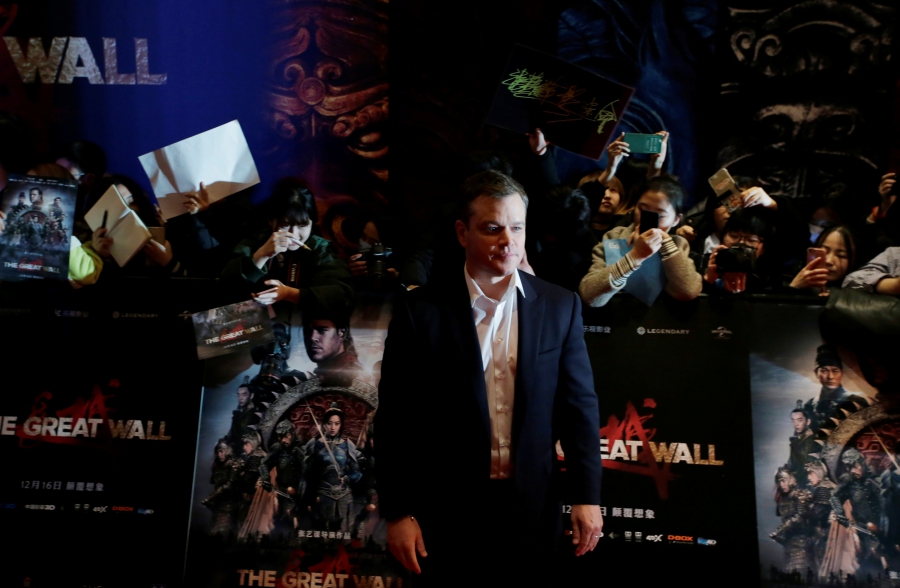 And then there’s Damon. For all the controversy around the casting of the actor in a “white savior” role in a story set in ancient China, Zhang plainly acknowledges that Damon’s involvement was a Chinese strategy to attract non-Chinese audiences.

Hollywood stars have been cast by the Chinese film industry for years, but few with as much clout worldwide as Damon. His recent film “The Martian” made $95 billion in China.

“The way the market is right now, we can’t make an internationally successful film on our own,” Zhang told The New York Times. “If we didn’t have Matt Damon, if we didn’t speak English in the film, then it would just be a purely Chinese film.”

“The idea of Hollywood being pandered to is uncomfortable, because it suggests that Hollywood has diminished in global standing,” says Kokas. “Or at least that their position is being challenged in a way it hasn’t been challenged before.”

In the last decade, China’s domestic ticket sales grew by an average of 35 percent per year, according to official data from China's State Administration of Press, Publication, Radio, Film and Television. The Chinese box office was estimated to overtake the North American market by 2017 — until last year, where there was a dramatic slowdown with only a 3.7 percent growth from 2015 to 2016.

But whether it takes one more year or five, the shift is already happening. Films like “Pacific Rim” and “Terminator: Genisys” made more money in China than in the US, and 2016’s “Warcraft” was an example of a film that flopped in the US, but still ended up doubling its production budget, in large part because it broke box office records in China.

However, Zhang’s differentiation between a “purely Chinese film” and an “internationally successful [Chinese] film” shows that what the Chinese film industry is chasing is not just the money, but instead what Hollywood, as a brand, inherently represents: global appeal.

Maggie Lee, Variety’s chief Asia film critic, reviewed “The Great Wall” when it first premiered in China in December. She believes China yearns for recognition and validation abroad. But she wouldn’t call the film an example of Chinese pandering.

China’s strategy, she argues, is much more direct.

“They’re buying their way in,” says Lee. The film’s most high-profile investor, China’s Dalian Wanda Group, bought out Legendary Entertainment, the American media company that first developed “The Great Wall” in 2016. The group is now also the owner of America’s largest theatrical distributor, after buying AMC Theatres in 2012 and acquiring Carmike Cinemas in 2016.

Money may not be enough to get China what it wants though.

“China is still quite strict with content regulations, so the question becomes, how much does that affect China’s ability to become a global media leader?” says Kokas. “There may be limitations on the amount of growth the Chinese market can have if they don’t have the ability to make whatever they want, including the types of films that may be popular for global audiences.”

That’s why the future success of projects like “The Great Wall” will be revealing.

“Every time there’s a new co-production, there’s hope that it will be the breakout film that actually works [for both markets],” says Lee. “But so far the Chinese audiences’ reaction to ‘The Great Wall’ has been that it’s a clearly a vanity project by the studios and it’s supported by the state as a soft power stunt. But even their own people aren’t buying it.”

That said, the spectacle of seeing Zhang directing Matt Damon was enough to draw enough audience members to make back the film’s $150 million budget in Chinese theaters alone.

And after this weekend, we’ll have the verdict on whether the Hollywood audiences are charmed.

Correction: A previous version of this story said China is the second most profitable movie market in the world. It is more accurate to say they have the second largest box office size.