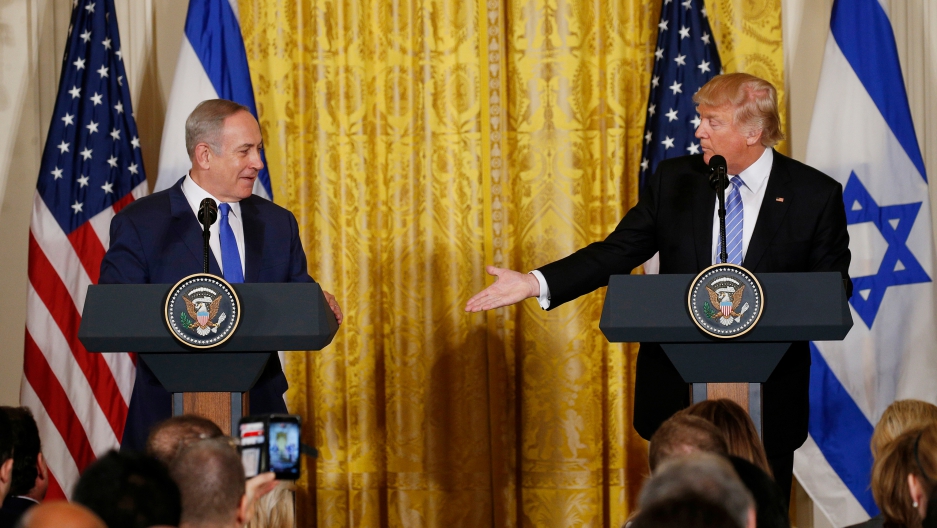 Anti-Semitism is on the rise in America. And the recent surge of anti-Jewish hate incidents appears to coincide with the political rise of President Donald Trump.

During his first solo news conference on Thursday afternoon, Trump was asked about the rising number of anti-Semitic crimes around the country. It was the second day in row that he got a question on this subject.

Trump appeared to become quickly annoyed by both the question and the reporter who was asking it.

“I haven’t seen anybody in my community accuse either yourself or anyone on your staff of being anti-Semitic,” began the question from Jake Turx, who writes for the ultra-Orthodox magazine, Ami.

“However, what we are concerned about and what we haven’t really heard being addressed is an uptick in anti-Semitism and how the government is planning to take care of it,” Turx continued.

Before Turx could finish, Trump cut off the reporter and said, “It’s not a fair question.”

The president told Turx to sit down and then began his answer.

“So, here’s the story folks. Number one, I am the least anti-Semitic person that you’ve ever seen in your entire life. Number two, racism. The least racist person. In fact, we did very well relative to other people running as a Republican,” Trump said.

At this point, Turx tried to chime in. But Trump told him to be quiet and accused him of lying.

“Welcome to the world of the media,” the president said, before continuing. “I hate the charge. I find it repulsive. I hate even the question, because people who know me and you heard the prime minister.”

That was a reference to Trump’s appearance Wednesday in a joint news conference with Israeli Prime Minister Benjamin Netanyahu.

During that event, an Israeli television reporter asked Trump about the rising level of anti-Semitism that seemed to take off during Trump’s presidential campaign and has continued after Election Day.

Trump began his answer to that question by talking about his victory in the Electoral College. He got around to saying that, “As far as people, Jewish people, so many friends; a daughter who happens to be here right now; a son-in-law, and three beautiful grandchildren.”

“It’s reasonable to say that Donald Trump comes to the White House with a more intimate relationship with the Jewish people than any of his predecessors,” says Jonathan Greenblatt, CEO of the Anti-Defamation League.

It’s great that Trump has Jewish family members and several Jewish staffers working in his White House, Greenblatt says. “But that is not enough.”

“Whether it’s intentional or not, when [Trump] misses an opportunity to reject intolerance and to marginalize the anti-Semites, it emboldens them. They hear it as a dog whistle, that what they’re doing is OK,” Greenblatt says.

The ADL has been tracking anti-Semitism in America for about a century. And Greenblatt says the surge in anti-Jewish incidents is very real. It includes bomb threats to Jewish preschools, swastikas spray-painted on buildings, synagogues vandalized and countless personal threats sent to Jewish people — including Greenblatt — via social media, email and text messages.

“It would be easy to simply say, in no uncertain terms, that America is no place for hate,” Greenblatt says. “Based on our polling, just over 10 percent of the American people have anti-Semitic attitudes. That’s pretty low in historical terms, but the issue is that many appear to be acting on it.”

“They feel the environment, if not encouraging it, at least isn’t discouraging it in an explicit way. And that’s a problem,” he says.

James Kirchick, author of “The End of Europe: Dictators, Demagogues, and the Coming Dark Age” and a conservative columnist for The Daily Beast, says he listened to Trump’s remarks and thought they sounded less sinister than some people seemed to think.

“It was typically tone deaf,” Kirchick says. “It’s too much to expect him to acknowledge that there were elements of his campaign that might have elicited the support of anti-Semites. I don’t think that he’s capable of that sort of introspection.”

Kirchick is no fan of Trump. Almost a year ago, he issued a stark warning about what Trump's election could mean for Jewish people.

“To those Jews who contemplate making peace with a President Donald Trump: He is the candidate of the mob, and the mob always ends up turning on the Jews,” Kirchick wrote in Tablet Magazine.

“If you look throughout history,” Kirchick says, "movements that are based on conspiracy theory, based on hatred of the vague notion of ‘elites’ without defining really who they are, that target minority groups, it doesn’t have to start with Jews.”

“But it will eventually end with Jews, because it’s the kind of logic of that thinking that is constantly in need of enemies to blame societal ills upon,” he says.

Today, it’s Muslims and Mexicans, Kirchick says. Tomorrow, it will be another group.

Trump received about a quarter of the Jewish vote in November, which isn’t much less than Mitt Romney got in the previous election. So there is clearly a certain level of Jewish support for what the Trump administration is trying to do.

Netanyahu tried to put the anti-Semitism question to rest during Wednesday's press conference.

“I’ve known the president and I’ve known his family and his team for a long time, and there is no greater supporter of the Jewish people and the Jewish state than President Donald Trump,” Netanyahu said.

But beyond Trump’s statements, a few things have caused alarm among many American Jews. The appointment of Stephen Bannon as White House adviser is one of them.

Bannon was a founding member and executive chairman of Breitbart News, which he described as a platform for the so-called “alt-right" — a loosely aligned cohort on the far right, in which white nationalists, anti-Semites and neo-Nazis have found a prominent voice.

Another stumble came on International Holocaust Memorial Day in late January, when the White House released a statement that failed to mention the 6 million Jews killed by Nazis. American Jewish groups from the left, right and center expressed their disappointment in the omission.

But on Wednesday, Netanyahu said those concerns “were misplaced.”

“This man is a great friend of the Jewish people and the State of Israel, there is no doubt about this,” Netanyahu said.

Rabbi Jill Jacobs of T’ruah, a Jewish human rights organization based in New York, is far from persuaded. She says the biblical story of Joseph has some relevance for American Jews today.

“As soon as that pharaoh dies, that relationship falls away and the Jews are put into slavery.”

Jacobs says Trump certainly didn’t invent anti-Jewish bigotry. Far from it. But she says Trump is guilty of failing to take a clear and forceful stand against it.