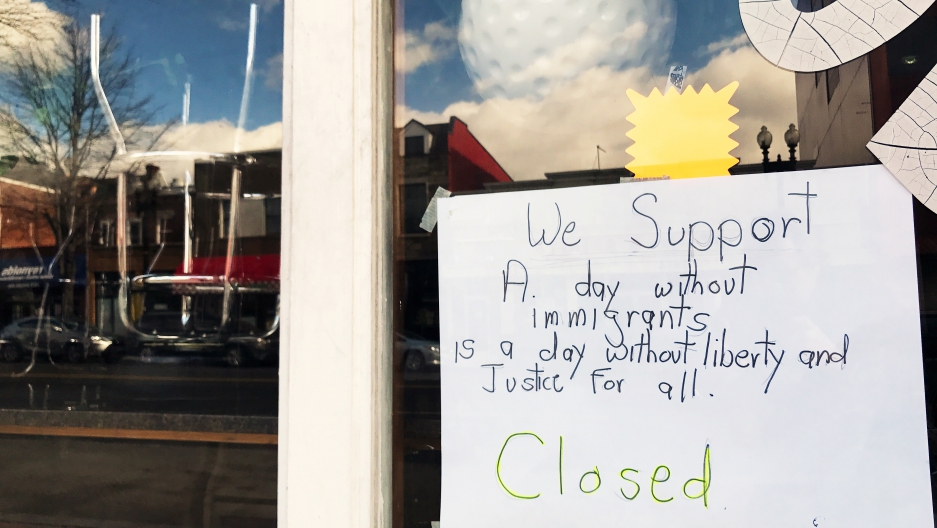 A restaurant on Georgia Avenue is closed in honor of the "Day Without Immigrants" protest in Washington, DC, on Feb. 16, 2017.

It's hard to determine how many individuals participated in the one-day walkout called the "Day Without Immigrants," but the boycott was visible in major urban centers on both US coasts and in cities from Detroit to Dallas. Foreign-born workers stayed away from restaurant jobs and encouraged employers to close businesses. Some shops and eateries stayed open, but offered reduced services or set aside a portion of the day's profits for immigrant organizations.

"This is the time not to sit on the sideline and watch what's happening but really to get engaged," says Andy Shallal, owner of Busboys and Poets restaurants in Washington, DC.

Shallal shut down all six of his restaurants on Thursday, offering paid sick days or vacation days to his 650 employees. The restaurateur isn't worried that taking part in the walkout might jeopardize the livelihood of other immigrant workers who have less generous employers.

"Everyone is going to use their conscience to be able to do what they have to do," he says. "I think people recognize that the fear that has been instilled in people in the last few weeks, the raids that have been happening, are creating a huge amount of hardships."

The event comes amid heated debate about new Trump administration policies toward immigrants, raids to deport undocumented workers and a stalled bid to ban immigrants from seven Muslim-majority nations.

Immigrant labor made up about 17 percent of the US workforce in 2015. Foreign-born households contributed more than $100 billion in income tax revenue in 2012, according to the US Bureau of Labor Statistics.

Shallal says he doesn't know how many of his workers are immigrants. But he's inspired by the story of an immigrant employee who has worked as a hostess at one of his restaurants for about seven years.

"She works almost nonstop, like literally day and night oftentimes. And she sends money back to her daughter whom she hasn't seen for seven years because of policies that make it impossible to see her daughter," he recalls. "So that's one of the issues we want to highlight in this Day Without Immigrants, is to talk about immigration reform."

The modern immigrant saga is personal for Shallal. He was born in Iraq and came to the US as a child. His wife was born in Iran. So both of them are from countries singled out by President Donald Trump's executive order restricting immigrant travel.

"We're both on the ban. We're both American citizens, we've been here for a long time and we feel American," he says. "But at moments like these — when suddenly you really feel like an outsider — it doesn't feel very good."