Anoud (her pen name) arrived in the United States in late December 2016. She was engaged to be married to an American citizen, so entered the US on a fiancée visa.

Within a month, Donald Trump was president, and days after that he issued his seven-country immigration and refugee ban. One of the countries was Iraq, Anoud's place of birth.

"It feels very strange," says the writer. Almost as strange as her dystopian story "Kahramana," which imagines Iraq in the year 2103 as a country split into zones. One, the Islamic Empire of Wadi Hashish, is run by a bumbling, extremist narcissist with hints of both Islamic State and Donald Trump. Another zone, Baghdadistan, is overseen by NATO. All sides, including humanitarian groups, play fast and loose with the facts. Would-be refugee Kahramana, whose name recalls the slave girl in "Ali Baba and the Forty Thieves," is no saint herself. 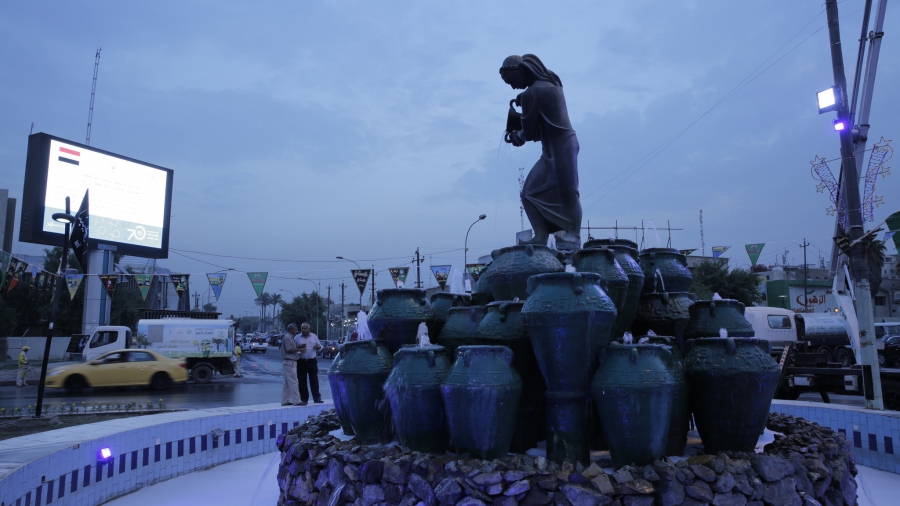 This is a statue of Kahramana in Baghdad.

Anoud writes in English, though she spends much of her time thinking in Arabic. Her bilingualism stems from a childhood spent in England and Ireland as well as Iraq.

I knew I had to visit Anoud in her New York home for The World in Words podcast. There, she told me of her upbringing — at one stage she believed she was Irish — and her blossoming as a storyteller, first in Arabic, then in English. She also told me of research she did for Western news organizations about extremist groups, predominantly ISIS. Her conclusions are chilling.

"When you listen to the Trump administration and the people who support Trump, some of them are specifically picking on the rhetoric that says, 'Ban Muslims, ban immigrants, all Arabs are crazy,'" she says. "It is the exact same way of thinking of someone who supports ISIS, [who]says, 'All Americans are bad; you can't speak English, you can't be a Westerner or you're an infidel.'"

Dark it may sound, but in her fiction, Anoud transforms observations like these into vivid satirical episodes, always with a sting in the tail.

7:40 Falling in love with Baghdad.

17:30 ISIS and some Trump supporters: a shared intolerance.

19:50 "In Arabic, the adjectives automatically creep in."