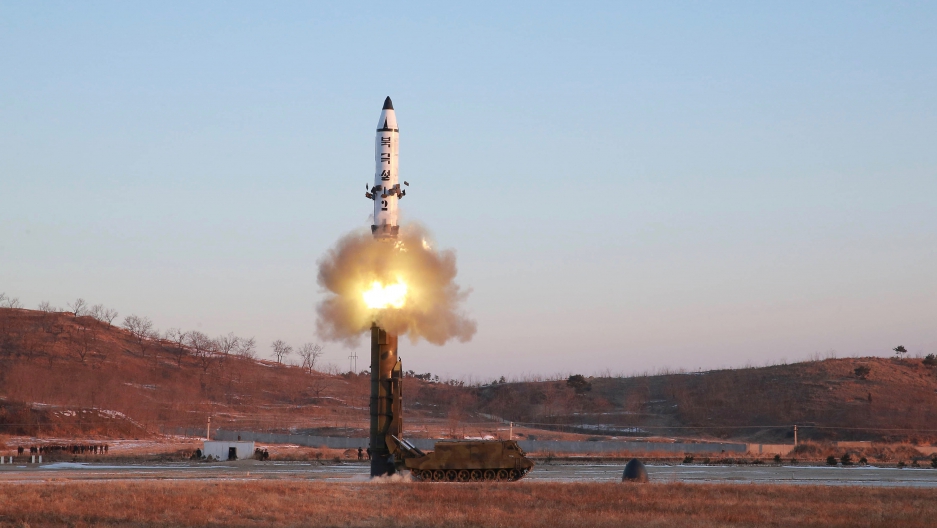 North Korea says it conducted a test launch of a Pukguksong-2 guided missile on Feb. 12 and that the test was a “complete success.” This undated photo was released by North Korea's Korean Central News Agency (KCNA) in Pyongyang on Feb. 13, 2017.

It’s pretty clear to most experts what the North Koreans are up to.

They conducted another missile test over the weekend, because — eventually — they want to be able to threaten the US mainland with a nuclear-equipped, long-range missile.

Pyongyang has a way to go to before it reaches that goal. But Sunday’s test might have marked some progress on a few different fronts.

The oft-asked question remains: How close is North Korea to being able to place a small-enough nuclear device on a long-range missile, one that can fly over the entire Pacific and reach the US West Coast?

“I’ve seen estimates that they might be ready by 2020 or so,” says Jeffrey Bader, who served on the National Security Council as President Barack Obama’s top adviser on US policy for Asia.

“I don’t think we really know, but certainly they are moving in that direction. And that’s what the [Trump] administration needs to focus on,” Bader says.

Trump said he would deal with North Korea “very strongly.”

But at this stage, it’s far from clear what Trump means by that.

“I don’t think there is a policy yet” for North Korea, Bader says.

And there are several quite understandable reasons why that's the case.

Trump’s pick to run the State Department, Rex Tillerson, was just approved by Congress. And James Mattis, the new defense secretary, has only been in place at the Defense Department for a few weeks.

In addition, most of the lower-level officials who will support Tillerson and Mattis are not there yet. “And they’re important, too,” Bader says.

He adds that the members of Trump's national security team also "have a national security adviser who’s under investigation at the moment,” referring to Michael Flynn, who faces allegations of improper contact with Russian officials prior to Trump’s inauguration on Jan. 20.

“You don’t devise a North Korea policy sitting around a table one day in response to a [missile] test,” Bader says. “You need a series of meetings of the National Security Council at the level of the secretaries, and I don’t think they’ve done that yet.”

Another key factor in all this is the political situation in South Korea, where President Park Geun-hye is facing impeachment proceedings. Any US policy for North Korea needs to be closely coordinated with Seoul, Bader says.

But that won’t be possible until the current political scandal is resolved, a process that might not be complete until South Korea holds another national election.

Trump appears to be taking a more cautious approach toward North Korea than he's done with at least one other country.

Iran carried out a medium-range missile test last month, and soon after that, Flynn made an announcement that the Trump administration was officially putting the Islamic Republic “on notice.”

Bader says it’s not clear what Trump’s national security adviser meant by that statement “except that it was meant to be scary to the Iranians.”

It’s easier to be more rhetorically forceful with Iran compared to North Korea, Bader says, because North Korea has nuclear weapons. Iran does not.

Trump’s first public response to the North Korean missile launch was to express US support for its Japanese allies. That was another way of kicking the can down the road, Bader says.

But again, there are good reasons why US presidents have been careful about how they deal with North Korea’s nuclear activities.

“This is a near-impossible problem. A succession of administrations have been dealing with this,” Bader says. The key factor that has remained unchanged for decades, he adds, is that the South Korean capital sits well within North Korean artillery range.

“Any kind of a strong or militarized [US] response towards North Korea comes with great risks for South Korea,” Bader says. What is changing, however, is the fact that the North is getting closer to its goal of developing longer-range nuclear weapons.

Bader says that puts more pressure on the Trump team, which will “have to come up with some new ideas on a problem that hasn’t seen many new ideas for 20 years.”