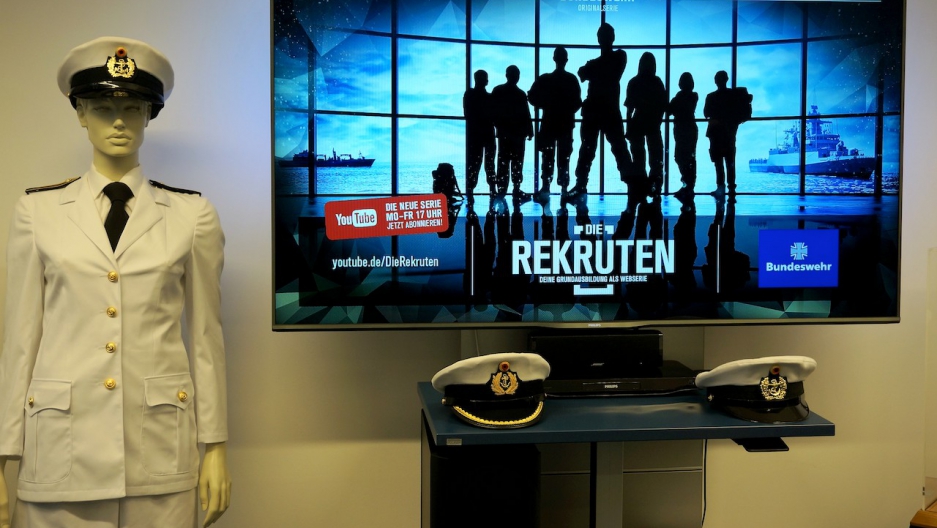 The Bundeswehr's showroom and recruiting center in the heart of Berlin proudly advertises its controversial web series "The Recruits," which follows 12 would-be soldiers on their journey through boot camp.
Credit:

In an age of YouTube stardom and social media darlings, businesses have invested heavily in digital strategies to attract the eyeballs of media-loving millennials.

That includes the German military, which is putting a millennial spin on its classic recruiting message, "We Want You!"

Since early November, Germany's Defense Ministry has invested around 6 million euros ($6.4 million) in a YouTube campaign to recruit young people in their early 20s to mid-30s.

Featuring first-person video and reality TV-style testimonials, the ministry’s web series, “The Recruits,” follows 12 would-be warriors through basic training. Producers claim it offers an authentic look into the life of a grunt in the Bundeswehr, the German armed forces.

"It gets rid of this barrier between civil life and military life," said Capt. Ferdinand Storm, who's worked at a Berlin recruitment center since October. "The two come together in a way that makes you feel as if you're experiencing it for yourself."

But "The Recruits" has become much more than just an advertising campaign.

With more than 270,000 subscribers, the 90-part miniseries is now a YouTube cult sensation. Garnering 30 million views since it went live on Nov. 1, it’s one of Germany's fastest-growing branded channels and has increased traffic on the Bundeswehr's recruitment page by 40 percent.

The show’s mix of humor and drama isn't catching on with everyone, however. The high-budget campaign has drawn criticism from legislators and historians who feel the series' depiction of young misfits navigating the bumpy transition from civilian to soldier glosses over the life-or-death reality of serving in the military — especially in times of increasing global instability.

"In Germany, the military is advertised as an adventure," said Sören Neitzel, a professor of military history at the University of Potsdam. "But people aren't being shot in these clips and they certainly don't die. The advertising glosses this over."

"We offered an open, transparent picture of basic training," said Feldhaus. "In no way did we gloss over the true purpose of the Bundeswehr: We merely showed everyday life during basic training like it actually is."

Germany has largely remained a pacifist nation since the horrors of World War II. Rather than celebrating the rough-and-tumble military culture of past generations, Germans today pride themselves on enlisting "civilians in uniform" who subscribe to strong democratic principles.

But this vision of the Bundeswehr has always been at odds with Germany's centuries-old tradition of obligatory military service that ensured that every citizen contributed to the defense of the Fatherland.

That conflict reached its breaking point in 2001. After the Sept. 11 terror attacks, Germany pledged to support US military action in Afghanistan.

"That really shaped those in Germany who already disapproved of the military," said Neitzel. "There isn't really a pop culture heroism here like you have in the USA. We're very critical."

As a result, more young people avoided long-term military service, especially those planning on attending university. (In Germany, young people choose between military or civil service.) For the first time, there was a major demographic shift within the military's ranks from educated, specialized candidates to those simply looking for steady work. Germany eventually suspended the draft in 2011.

But more recently, as tensions mounted between the West and Russia following Moscow’s annexation of Crimea and its support for separatist movements in Ukraine, Chancellor Angela Merkel’s coalition government floated the idea of resuming conscription during emergencies. The proposal was never adopted.

Today, Germany's military faces the practical question of how to make service attractive again for qualified recruits. Their solution: present military service as a career path within a civil institution.

"For this reason, they're creating advertisements that are more colorful and diverse," said Neitzel.

The German military has turned to social media as a vehicle to deliver this message. Using Facebook Live and Snapchat, the military profiles different job opportunities and engages directly with prospective recruits.

It's proven a successful strategy. While the Bundeswehr only needs about 20,000 new recruits per year to shore up its force of around 180,000, they routinely receive double that amount in applicants, according to government figures.

When researching whether he should enlist, 18-year-old Tom perused the Bundeswehr's social media channels before visiting a recruiter for a consultation.

"I'd comb through YouTube series and documentaries on the Bundeswehr and imagine myself joining up," said Tom, who declined to provide his last name because his current employer was unaware of his military aspirations.

But Tom says he's largely shied away from watching "The Recruits," even though he subscribes to many of the Bundeswehr's social media channels.

"It's pretty propagandistic," he said, based on his friends' impressions of the series. "I mean, it's trying to get people interested in the Bundeswehr — that's the whole point."

Lt. Cmdr. Daniel Fischer, the office supervisor at the Bundeswehr's recruitment center in Berlin, admits he was a bit skeptical of "The Recruits" at first. Montages of new conscripts tripping over one another in basic formations or crying when they removed piercings left him wary.

But after viewing the first few episodes, he came to see the series as valuable information for prospective soldiers.

"If they've already seen 'The Recruits,' I'm able to skip over a lot in our initial meeting," he said.

The series’ immersive quality is one of the factors that has made it such a hit with those interested in the Bundeswehr, said military officials. Many people who come to the recruitment center mention the series, he said, adding that stoking this kind of interest is valuable for a military with increasing global importance.

Germany has mobilized troops in the Baltics in anticipation of a Russian land grab, a la Crimea, but the government has not acted on proposals to increase investment in the force’s notoriously lackluster weaponry. In the wake of an embarrassing 2014 government report detailing faulty helicopters, ships and weapons systems, Merkel late last year vowed to hike spending.

"The roll of the Bundeswehr on the stage of geopolitical affairs will only become more prominent," he said. "It's important that we look towards recruiting qualified personnel who really recognize this direction."

But in order to bulk up the Bundeswehr, public perception of the military needs a paradigm shift that’s probably greater than a web series can deliver, said Neitzel.

"We have a society in Germany that really can't deal with military involvement," he said. "That's not going to change overnight."