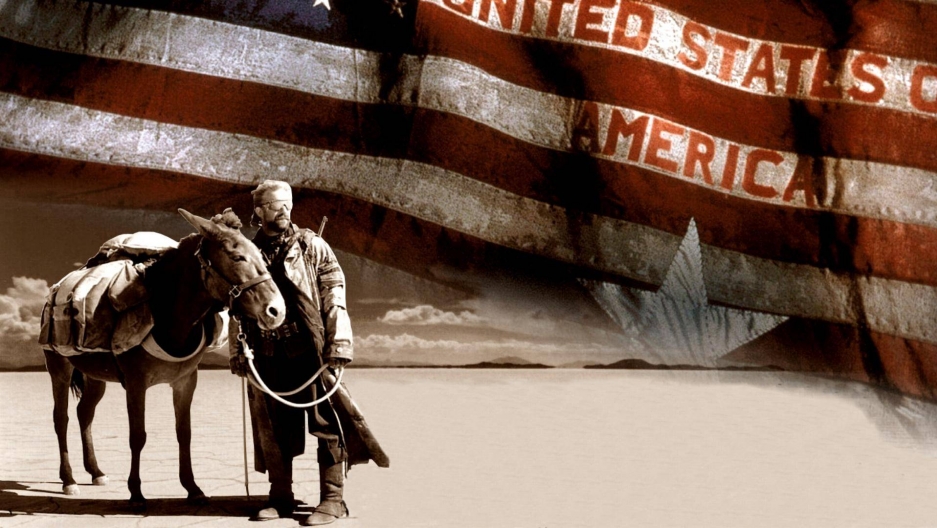 Kevin Costner stars in the post-apocalyptic film "The Postman," based on the 1985 novel of the same name by David Brin.

Long before David Brin became a scientist and author, he practiced duck-and-cover drills in his elementary school classroom. And because the threat of nuclear war hung over his childhood, it has become a big part of his fiction.

“The teacher would be talking away, and suddenly, in the middle of a sentence, say, ‘Drop!’” Brin recalled. “That’s how much time you’d have if you noticed the flash of a nuclear blast.” He was so conscious of nuclear risks that he wanted his own fallout shelter. “I wanted my mother to buy a used tanker car from the railroad, and bury it in our backyard.”

In a recent conversation with Catherine Asaro, a physicist and sci-fi writer, Brin said his most famous book, "The Postman," brought about a kind of catharsis for him. “I used that book, deliberately, to discharge a lot of the stress of having grown up all my life, wondering — is this the day mushroom clouds appear on the horizon?” Brin said.

Have a question for David or Catherine?

If you've got your own questions for Catherine and David about nukes, sci fi and the apocalypse, you're in luck. Today, they're hosting an AMA — that's 'ask me anything' — on Reddit. You can find them there from noon to 3 p.m. Eastern Time.

In the 1985 novel, which later became a film starring Kevin Costner, a man wanders the scarred landscape of North America after a nuclear war.

“I don’t think that fear has gone away,” said Asaro, who has written many “hard science fiction” novels about space, technology and the military. In her opinion, readers today are even more aware of the dangers that society faces. But she believes the fear of catastrophe no longer centers on nuclear weapons.

“It’s increased, to the point where it’s not just nuclear winter anymore,” Asaro said. In recent years, many sci-fi writers have explored the dangers of climate change, cyberwarfare and advanced artificial intelligence.

There’s a long history of creative works that grapple with humanity’s biggest challenges, especially nuclear weapons. A few examples include Pat Frank’s "Alas, Babylon," George R. Stewart’s "Earth Abides" and Stanley Kubrick’s "Dr. Strangelove or: How I Learned to Stop Worrying and Love the Bomb." Dystopian fiction blossomed during the Cold War, but it still thrives today. “It’s probably one of the most popular areas of young adult fiction right now,” Asaro said.

So why are readers and writers so interested in imagining the end of life as we know it?

“This is the future our kids see that we’re leaving them,” Asaro said. She believes that young people today sense that they will have to grapple with risks their parents never faced. “I find that very sobering.”

Still, for someone who spends much of her time imagining technological dangers, Asaro seems optimistic. She’s terrified by the idea that humanity could design weapons that are even more destructive than nuclear bombs. But perhaps humanity could also design institutions and governments that will ensure those weapons are never used.

“You can extrapolate forward how we dealt with the Cold War on this planet, among our governments,” she said. She’s comforted by the fact that the United States and the then Soviet Union prevented nuclear war in the 20th century.

According to Asaro and Brin, science fiction can help us imagine — and perhaps avoid — the new risks our society could face. “That’s our job, to think outside the box,” Asaro said. Both she and Brin have worked as consultants, especially for government agencies that want to imagine future risks. For example, Asaro recently participated in a US Army conference focused on emerging threats in the next 20 years.

“We’re rushing headlong into this future,” Brin said. “It’s best if we poke sticks into the ground that we’re about to be running across. Because that can find the land mines, the snake pits, the quick sand.”

Asaro laughed, and added, “Exactly. We have to poke the beast, and see if it roars at us.”

“Or poke the beehive,” Brin said, “and see if they’ll be friendly and give us some honey.”