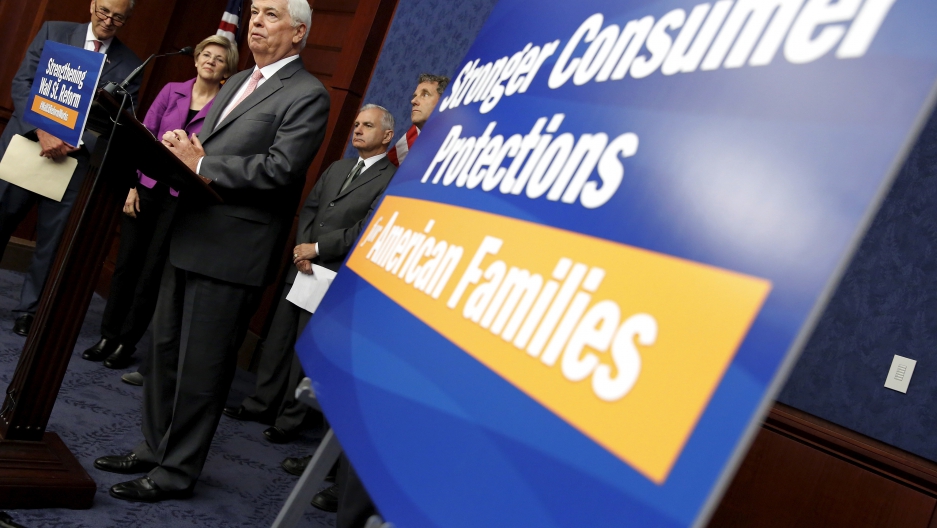 Former US Senator Chris Dodd speaks at a news conference marking the fifth anniversary of the passing of the Dodd-Frank Wall Street reform law, on Capitol Hill in Washington July 21, 2015.

Mr. President, you have called the Dodd Frank Act a disaster. If you cut financial regulations, how will you prevent another financial crisis?

In the wake of the 2008 financial crisis, Congress moved to pass new laws that subjected the financial industry to tighter regulation. Collectively know as the Dodd-Frank Act, different parts continue to be implemented. But President Trump has taken steps to rein in implementation — and there are signs he may be in for more.

During a 10-minute press conference, Trump promised to, “do a big number on the Dodd-Frank law.” He said small businesses would benefit from his executive order, despite the law’s intent to regulate big Wall Street institutions like JP Morgan Chase.

Trump’s pick for Treasury secretary, Steven Mnuchin, has vowed to kill key parts of the act — particularly the Volcker rule, which restricts banks from making “speculative investments.” Some people say those sorts of investments fed the global financial crisis.

“The American dream is back,” Trump said after his press conference. But who is it back for?

So, Mr. President, how will you prevent Main Street from being damaged by another Wall Street crisis? Click here to tweet the question.