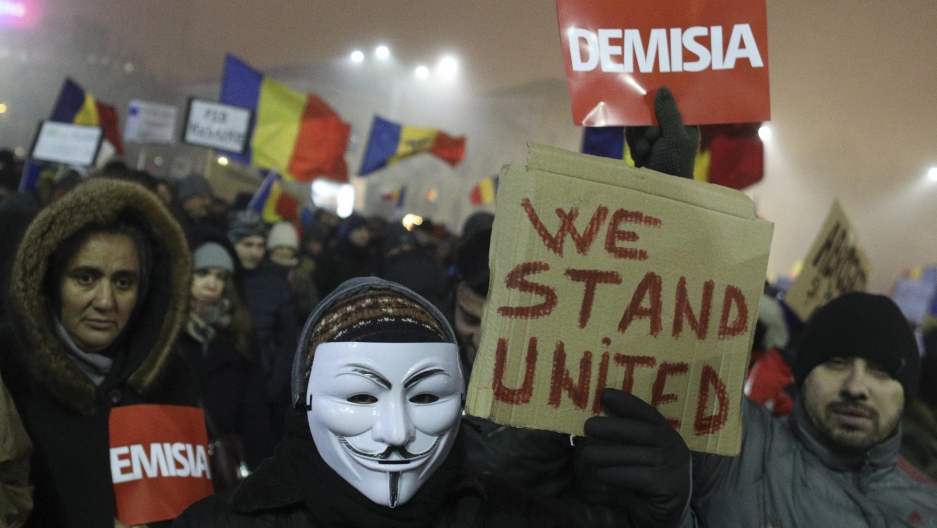 Protesters in Romania are not backing down, even after the government gave in to their demands Sunday night.

The left-wing government had scrapped the controversial decree that would have shielded many politicians from prosecution for corruption. But protesters are still brandishing banners, waving flags and blowing whistles and vuvuzela horns. They say they believe the government is still not to be trusted, with many chanting "Resign! Resign!"

"They are corrupt. We want justice. ... The government will still try something [with the decree]," Emma, 24, one of around 250,000 protesters that media estimated were in downtown Bucharest, told the news agency Agence France-Presse.

"They are liars and bad people," her friend Nicole, 25, shouted above the racket at Victory Square, the epicenter. "The government has to fall. ... We are going to come back here every night."

Romania has made major gains fighting corruption in recent years. The country's independent National Anticorruption Directorate prosecutes more than 1,000 people a year and convicts most of them. Among those convicted are a former prime minister, 16 parliamentarians and five senators.

But on Jan. 31, Romania's newly elected Social Democratic Party pushed through an executive order that would have decriminalized abuse in office by officials, if the sums involved were less than $47,500. The decree was passed in the middle of the night with no input from parliament. It would have stopped all investigations for pending corruption offenses, freed officials imprisoned for corruption and prevented further investigations related to those offenses from being tried.

One person who would have stood to directly benefit is the president of the Social Democrats, Liviu Dragnea. He's not allowed to become prime minister because of a previous conviction for vote rigging. The order might have allowed him to become the country's leader.

The decree sparked massive street protests in Romania for the past week — estimates place the crowd size at half a million people.

The BBC's Nick Thorpe says the last time he saw such large protests in the country was during the Romanian Revolution of 1989, which brought down communist dictator Nicolae Ceausescu.

"A lot of the people on the streets are too young to remember that," Thorpe says, "but they're aware of a protesting tradition in Romania, starting with the revolution."

Thorpe says protesters are carrying puppets of Dragnea, posters of the Social Democratic leader wearing a prison uniform and large cardboard cutouts of prison cells. "This has turned into a huge standoff between the incoming government, which won comfortably the election only two months ago and this massive number of people on the streets."

And the masses are showing no signs of letting up, Thorpe says.

"They're radicalizing their demands. This isn't over by any means."