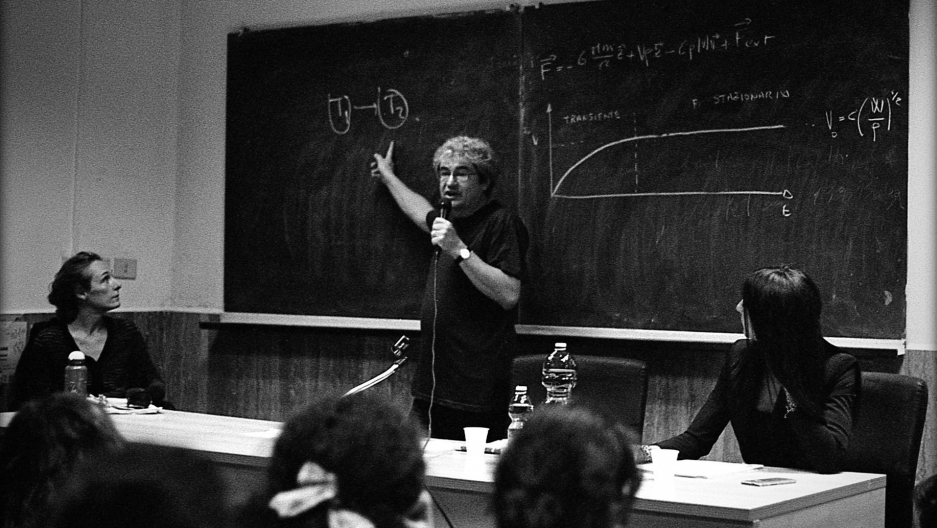 Italian theoretical physicist Carlo Rovelli is shown here. This picture was taken at La Sapienza University of Rome in 2015.

“Overall, discovering the world is a complicated business,” says the theoretical physicist Carlo Rovelli. “And it goes slowly. It has always gone slowly. And it's still going slowly now, I believe.”

Rovelli’s putting it simply, but that’s all the better for the rest of us: He specializes in quantum gravity, a way of describing gravity using the principles of quantum mechanics. In his recently translated book “Reality Is Not What It Seems: The Journey to Quantum Gravity,” he calls quantum gravity “the main open problem in fundamental physics.”

“We have quantum mechanics that works extraordinarily well, and we use it for describing matter, for doing computers, for describing particle physics, the atoms, the nuclear forces and all that,” Rovelli says. “And then we have general relativity. That also works very well, and describes galaxies and stars and how things fall and the gravitational waves.”

The problem is that the theories describe different things well. In fact, “these two theories, at least at first sight, seem incompatible with one another,” he explains

“It's like students of physics that go to listen to classes in physics university. In the morning, they get one professor that says, ‘Look, the world is so and so and so.’ And in the afternoon, they get another professor that says, ‘The world is so and so.’ ... They cannot be both true. One of the two, or both, should be adapted to go with the other. So definitely we have a hole, I think we don’t understand the texture of reality.”

Uniting the two theories has preoccupied physicists for more than a century, in just one example of the slow progress of discovery, Rovelli says. So far, it’s been unsuccessful, in that no unifying theories have been proven.

“There's a paper by Einstein in 1916 — so a century and one year ago — in which he says, ‘Look, there is a problem, and we have to figure out how gravity stays together with quantum mechanics.’ And nobody for the moment has solved that problem. Or maybe not — maybe I have solved the problem. Maybe somebody else has solved the problem. There are theories around, there are tentative theories around … but we don’t have experiments supporting them, and we don’t agree with one another.”

Rovelli says that the main problem between quantum mechanics and general relativity appears when we examine space at a very small scale. He helped found a theory of quantum gravity, called loop quantum gravity, which offers one way of approaching the puzzle. Loop quantum gravity indicates that although we’re immersed in space, space isn’t continuous, Rovelli explains. Instead, space has an atomic structure: “So there are grains of space, quanta [of] space.”

“Imagine we're not immersed in a continuous three-dimensional thing, but we are immersed in a granular thing. So there is a minimal possible bit of space, and that's what loop quantum gravity describes: The way these chunks of space interact with one another, their size, their shape … and how they make networks to one another. They form a kind of net, being attached to one another in these net loops. That's where the name ‘loop quantum gravity’ comes from.”

Or to look at it another way, Einstein discovered that space is like a rubber sheet that can bend and stretch. “And if you fold quantum theory in, this rubber sheet … actually has a texture, like a T-shirt,” Rovelli says. “It’s made by little small sort of particles, except careful — these particles are not in space. They are space themselves.”

The loop quantum gravity theory hasn’t been tested yet. But if space is actually granular, it would mean “changing notions like energy and all that,” Rovelli says. It would also count space among other foundational things, like matter and light, which we now know are made up of particles.

“We thought that matter was continuous, and it took quite some time to realize that matter is not continuous,” he explains. “It’s atomic, it’s made by atoms and molecules, by particles. This was only understood about the beginning of the 20th century, not before that. It's one of those ideas that is very old. It was suggested in ancient times. But it was realized recently.”

That’s not to say that Rovelli doesn’t expect space to keep surprising us. In “Reality Is Not What It Seems,” he approaches the complexity — and mystery — of quantum gravity head-on.

“The world is more complicated than our intuition,” he says. “There’s no doubt about that. Our intuition is that Earth is flat and round … that we don't move. But actually Earth moves, and so on and so forth.”

“So science is realizing that our intuitions are often naive. Things are more complicated, they are more beautiful, and they're very surprising when you go into them.”