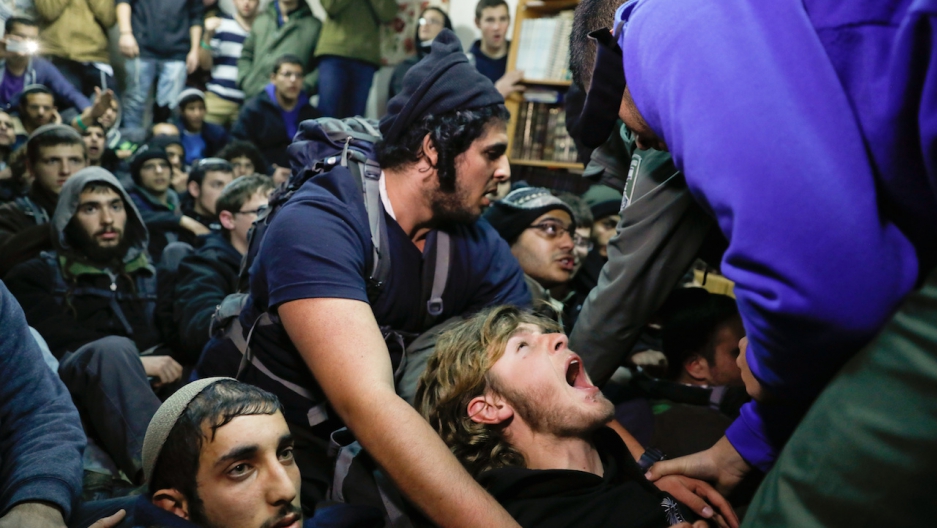 Israeli policemen try to remove pro-settlement activists from a house during an operation by Israeli forces to evict settlers from the illegal outpost of Amona in the occupied West Bank, Feb. 1, 2017.

The evacuation of the illegal Israeli Amona settlement in the West Bank ended Thursday, after a two-day clearing operation that turned violent on the second day.

Some 3,000 security officers were involved in the effort to clear 40 families from their homes, and to contend with more than 200 radicalized youths from all over the West Bank and Israel who had come to "support" the residents, adding to clashes that left dozens of police and settlers wounded.

Yaakov Wertzcher, a spokesman for the settlement, was the last to be evacuated on Thursday morning. As he walked out, he kissed the ground in front of his home. His wife, sobbing, screamed at the policemen, "You are Jews! You have a choice! Refuse to obey these immoral orders."

Amona was the largest of the approximately 100 unauthorized outposts in the occupied West Bank. Three years ago, in response to a petition filed by Palestinian landowners, Israel’s Supreme Court ruled that the settlement was built on private Palestinian land and must be vacated. After granting the government numerous delays, the court set Feb. 8 as the last possible date to move settlers from the land, and refused to hear any further petitions for delays.

But the clearance of Amona doesn’t represent a change of heart about settlement building among Israeli authorities. In fact, it came just as Prime Minister Benjamin Netanyahu announced the development of thousands of new settler homes in the West Bank.

Stating that he had no choice other than to obey the court order, Netanyahu announced on Wednesday that he would "compensate" the Amona settlers by building them a new settlement. If established, it would be the first new settlement in more than 20 years. Netanyahu also pledged to add 5,500 new housing units in existing settlements throughout the West Bank.

"We lost the battle for Amona, but we are winning the war for the Land of Israel," Education Minister Naftali Bennet declared. Settler leaders and right-wing politicians seemed to agree. Bennet is pressing for legislation to annex the settlement of Ma'ale Adumim, just east of Jerusalem. It would represent the first-ever annexation of a settlement that is not part of municipal Jerusalem, as defined by Israel.

The Israeli parliament is also scheduled to vote next week on legislation that would retroactively legalize hundreds of homes and outposts that were built on private Palestinian land, thus preventing any future evacuations.

All of the Amona families were evacuated to Ofra, a large settlement in the valley to the northwest. The High Court in Jerusalem rejected an initial government-proposed relocation plan this week, citing Palestinian claims to ownership of some of that land, too. It thus remains unclear where the settlers will relocate. 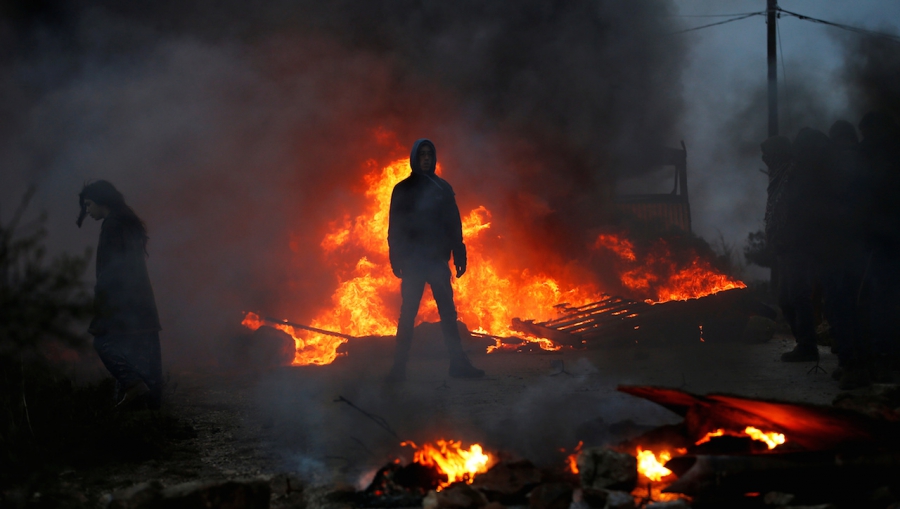 Protesters stand next to fires at the entrance to the Israeli settler outpost of Amona in the occupied West Bank, Feb. 1, 2017.

"I knew they would be coming, and yet, another part of me could not believe it," said Shani Hamo, who had lived in Amona for 8.5 years. Heavily pregnant, holding her three young children close, Hamo continued: "It was too hard for me to believe that the police in the Jewish State would evacuate Jews from their rightful homeland. ... I was shaking so hard, I was so full of despair, a policewoman had to help me leave. I couldn't stand."

Israeli media broadcast the evacuation live for hours at a time, putting pressure on the settlers and the police alike to ensure that the evacuation proceeded without injuries. "The public supports the evacuation; we don't want to create any settler-martyrs to change that," one policeman told PRI.

On this point, Hamo agreed. "We want the public to know that, as settlers, we observe the rule of law."

But the radical youth had no such hesitations. Days before the evacuation, they barricaded themselves in the synagogue with wooden beams, sheets of scrap metal, bookcases, and furniture. Communicating largely through bullhorns, religious leaders tried to negotiate with them to leave peacefully, but they refused. After a three-hour standoff, the police SWAT teams breeched the synagogue, using pneumatic drills, jackhammers and water hoses.

The youths retaliated by throwing stones, fire extinguishers and paint cans at the police and spraying them with tear gas. Kicking, cursing and praying, the youths were carried out individually, held by four or more policeman. It took over four hours, and more than 60 police officers. A dozen youths were injured.

Following the evacuation of the synagogue, the police permitted Yair Frank, rabbi of Amona, to say a final prayer at the site. Sobbing, Frank asked, "How can the State of Israel destroy a synagogue? The entire Jewish people should be crying on this day."

But pro-settlement officials are confident that the election of US President Donald Trump marks the beginning of a hopeful new era. "The evacuation of Amona marks the end of the eight bad years under President Obama," said Nevo Katz, spokesman for the Ofra settlement. "Obama hated the Jewish people. But President Trump understands the Jewish people's rights to the Land of Israel. Netanyahu will be meeting with Trump next month, and we will finally be able to grow and flourish."

In a surprise statement on Thursday, however, the White House said that “the construction of new settlements or the expansion of existing settlements beyond their current borders may not be helpful in achieving” peace.

Nonetheless, Trump’s administration seems to be leaving ample room for negotiation. Press Secretary Sean Spicer’s office added: “The Trump administration has not taken an official position on settlement activity and looks forward to continuing discussions, including with Prime Minister Netanyahu when he visits with President Trump later this month.”