A group of Barcelona’s unlicensed street vendors is shown here in full swing along the waterfront in May 2016.

Lamine Sarr is from rural Senegal. He left in 2007, looking for a better way to provide for his parents and siblings. The images of Europe’s tall buildings he saw on TV convinced him he’d find work there. Like many migrants, Sarr made the journey on a small, dangerously packed boat. His was heading to Spain.

“Risky, right?” he said. “It was a difficult trip, with a week on the ocean.”

In the mid-2000s, tens of thousands of Africans, about half from Senegal, were also trying to reach Spain’s Canary Islands. Many drowned en route, and the Canaries’ government called it a humanitarian crisis.

Sarr survived the trip but was sent to one migrant detention center and then another. Spain has eight of these centers, which Amnesty International and the Catalan government have criticized for being unsanitary, overcrowded and inefficient. Sarr said they’re a nightmare. But he wasn’t deported, instead, he was set free into the limbo of living without papers.

Sarr is 34 now, tall, thin and quick to laugh. He even smiles when he talks about how he’s survived the last decade in Barcelona: hawking knock-off designer handbags and sunglasses on the city’s sidewalks, without a permit. On the bright side, he likes chatting and trying to persuade tourists to buy something, using his usual sales pitch.

“What we always say: ‘I’ll sell you something that’s good, that’s cheap, that’s perfectly made,’” he said, laughing. “That’s what you say to sell.”

He bundles his merchandise — much of it counterfeit and thus illegal to sell in Spain — in a blanket. A web of rope tied to each corner makes it so that when the police come, he can gather up the goods and run. That blanket, in Spanish, la manta, has come to define who he is to locals: a mantero.

“People look at us, and think that we only know how to peddle,” he said. “But that’s false.”

Sarr is one of an estimated 400 unauthorized peddlers working the sidewalks of Barcelona, according to a September 2015 city survey. The majority are young or middle-aged men and city residents, but without residency papers. The survey even broke down which ethnic group tends to sell what and where: Pakistanis — souvenirs in tourist zones or cans of beer in nightlife areas; Senegalese — imitation or counterfeit goods. A small group of older African men hawk things salvaged from the trash.

They do it, Sarr said, because as immigrants in a country with a falling yet still high unemployment rate (18.6 percent at the end of 2016), they’ve found it nearly impossible to get the 12-month work contract they need to become legal residents.

“People are taking up peddling to make a living,” he said, “because there’s not another option.”

Lamine Sarr, right, during an August 2016 demonstration by Barcelona’s street vendor rights group, protesting the detention of a fellow vendor.

Sarr and some 100 other unlicensed street vendors have also mobilized, protesting their lack of options and criticizing the city for welcoming refugees but not them. Their slogan: “Surviving is not a crime.” Sarr is a spokesman, and as such, has become the face of a movement of economic migrants ever more vocal and visible in their demand for humane treatment and dignified work.

Barcelona has been dealing with illegal street vending at least since the mid-1990s, after the city widened the sidewalks of its central square, unintentionally making space for hawkers to put down their blankets. Police can fine unlicensed vendors, confiscate their merchandise and arrest them if they don’t have ID that shows they have permission to be living and working in Spain. The activity has been criminalized, decriminalized and as of 2015, criminalized again. Judges can sentence serious offenders to up to two years in prison and also deport them.

After taking office in the spring of 2015, Barcelona’s left-wing Mayor Ada Colau (who has a storied history of being detained by police while fighting foreclosures) was lenient toward unlicensed peddling. By winter, the number of vendors had grown by several hundred, many commuting into the city to work. Business owners and opposition political parties complained, and the Colau administration switched gears: more policing plus more social services. To deter tourists from fueling the informal economy, it posted signs saying, “Don’t buy from unlicensed vendors.”

Unlicensed street vendors in August 2016 run past police vehicles to get a spot on the boardwalk in the port area of Barcelona.

Barcelona’s city administration considers illegal vending a consequence of global migration and the country’s immigration law — and therefore too big to get rid of, according to Tatiana Guerrero, an adviser to the mayor on the issue. She said the city wants a dignified life for immigrant vendors, too.

“What we’re working on,” Guerrero said, “is for the people doing unauthorized peddling to have a different outlet than being in the street, having to get up over and over when the police pass by or have to carry kilos and kilos on their backs, up and down, in the cold and rain.”

So far, the city has signed up 54 sellers for training to become fishmongers, translators or mediators. It’s also helping 15 more form a small-business cooperative, with plans to expand. Those initiatives are the first step, Sarr said, but only benefit a small number of sellers. He himself is ineligible to participate because of the police record he’s earned from unlicensed peddling and twice entering the country illegally. So while those vendors have found a way up and out, he said the rest can’t make enough money because of the constant policing.

“Look at the street,” said Sarr, “and you will see that it is full of police who are standing there, who don’t have any business there except to hunt us down. That’s ugly — it’s very hard.”

For now, illegal street vending in Barcelona isn’t likely to get easier for those stuck doing it. The region is stepping up legal action, going after the networks that supply vendors with counterfeit merchandise.

One day this past November, police took down a main supplier of counterfeit products destined for street peddling. Some 200 officers searched 15 homes, discovering 118,000 items, along with industrial sewing machines, logo-making software and fake money. They arrested nine people, including the person allegedly at the top of the supply chain. 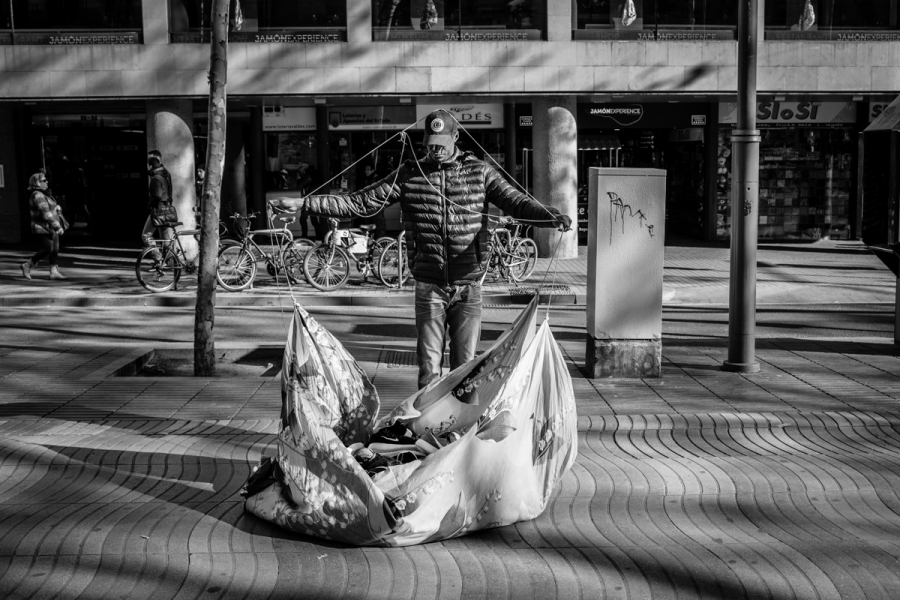 This is Lamine Sarr in January 2016 with a blanket full of knock-off Nike sneakers.

Sarr’s been a target, too. In July, in an unrelated operation, police searched the apartment where he was living with six other Senegalese vendors. Inside they found falsified designer labels and around 1,300 counterfeit items ready for sale, according to a spokesperson for the Catalan police. They detained the men, accused of violating intellectual property law and being part of a criminal organization. Sarr was among the four kept in custody. More than 300 of Barcelona’s unlicensed vendors held a market in protest.

“Everyone knows we're not criminals,” Sarr said. “We're not mobsters. We are only working to survive.”

The mayor’s office doesn’t think he’s a mobster either, or that there’s a mafia of unlicensed vendors at all, according to Guerrero, the adviser.

“The people selling on the street are the last rung,” she said, “and who is actually getting an economic return are the people on top.”

A judge released Sarr and the others 10 days later, saying their ties to Spain made it unlikely they would flee. Sarr checks in at the courthouse twice a week while he waits for his case to proceed.

In the meantime, he’ll keep working the sidewalks, with no idea of what the future holds for him.