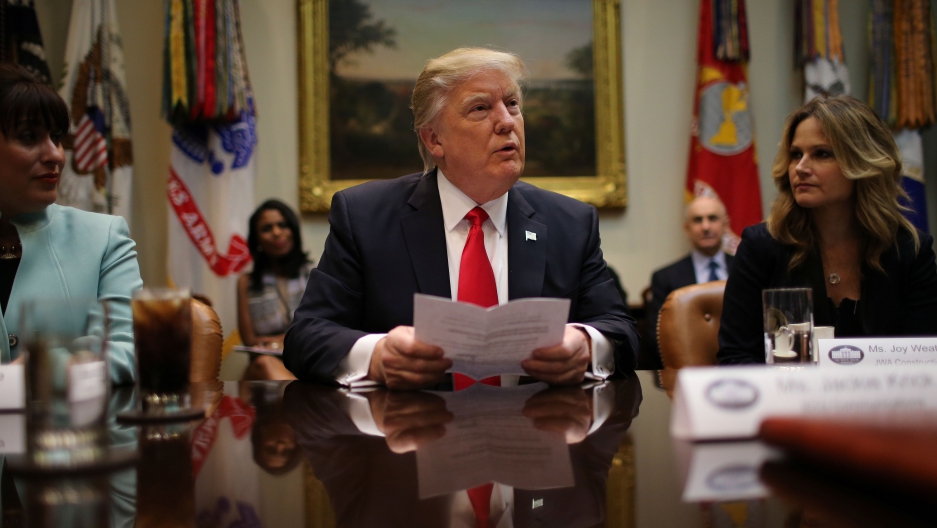 President Donald Trump holds breakfast meeting with small business leaders at the Roosevelt room of the White House in Washington, DC, on Jan. 30, 2017.

Twitter is abuzz over a pro-President Donald Trump television advertisement that urges viewers to call a toll-free number and “pledge your support to defend Donald Trump.”

“We need every Trump supporter to pick up the phone now!” the ad’s fast-talking narrator says as he also slams “liberals in the Democratic Party” and the “crooked media” for attacking the newly inaugurated president.

The narrator continues: “They think they are going to destroy Trump’s presidency, but they are wrong! … Make your voice heard and help drain the swamp!”

The ad became too much for “@Jess4_RK,” an unverified Twitter user, then with a few hundred followers.

Legions of people — including celebrities — began retweeting @Jess4_RK and commenting on her post, which garnered more than 30,000 retweets before she blocked public access to her account.

“This is just pathetic. Sounds like a commercial for aluminum siding you see on AMC in the middle of a Gunsmoke marathon,” snarked musician Mikel Jollett.

Many outraged commenters believe that Trump himself — or those within Trump’s inner circle — were responsible for the ad.

They are mistaken. Not only is there no connection to Trump, the ad is made possible by a group that employs a one-time Trump hater who is making a pretty penny.

As noted in the fine print displayed in the ad’s final few seconds, the ad is sponsored by the “Committee to Defend the President.”

Stop Hillary PAC, for its part, is a hybrid super PAC that formed on May 16, 2013 — more than two years before Trump announced his presidential run.

Guy Short, vice president of fundraising for political consulting firm Campaign Solutions, is a Stop Hillary PAC consultant and, according to an advertising disclosure document filed on Jan. 16 with the Federal Communications Commission, “founder.” Campaign Solutions, it so happens, is also Stop Hillary PAC’s top vendor, according to federal records.

Short, who made headlines earlier this decade for his political work with ex-Rep. Michele Bachmann, R-Minn., is never mentioned in Stop Hillary PAC’s public communications to supporters and potential donors. And he’s no unabashed supporter of Trump.

For example, Short last year served as a delegate to the Republican National Convention — and pledged to back Sen. Ted Cruz, the Republican US senator who ran against Trump. Short last year also called Trump a “liar,” telling Reuters in April that he “spent thousands of dollars of my own money campaigning to become a delegate because it's that important to make sure Donald Trump is NOT our nominee."

In an opinion piece published last year in the Colorado Statesman, Short further accused Trump of “spewing his usual fiction” and trafficking in “insults, lies, distortion and vulgarity.” He also lamented: “It’s very worrisome to wonder how a man like Trump would exercise the powers of the presidency.”

In an email Monday, Short noted that he and many other Republicans, including Trump’s general election campaign manager Kellyanne Conway, didn’t support Trump during the party’s primary.

“After the primary was over and my preferred candidate lost the nomination, I worked hard to defeat Hillary Clinton and elect Donald Trump — just like I have in the past five presidential cycles when my preferred candidate didn’t win,” Short said, adding that he contributed $5,000 to Trump’s transition committee. “The President has my full support. This is about as common in politics as its gets. I fail to see how this is newsworthy.”

Dan Backer — a Virginia-based lawyer and political consultant who serves as Stop Hillary PAC’s treasurer — confirmed Short has worked with Stop Hillary PAC since its inception in 2013.

“Guy regularly talks to media vendors on behalf of [the Committee to Defend the President] to ensure digital and nondigital communications are in sync,” Backer said. “He was tasked with point on this particular project.”

Initially, Stop Hillary PAC made its most notable mark on politics by feuding with the Federal Election Commission over whether it could even use its own name.

Federal law stipulates: “No unauthorized committee shall include the name of any candidate in its name." And while the FEC prodded Stop Hillary PAC to comply, it refused, even after Hillary Clinton in April 2013 announced she’d seek the Democratic presidential nomination.

Then, last year, Stop Hillary PAC raised eyebrows when it emailed fundraising pleas — signed by “Donald and Ted,” sans last names — at a time when Trump and Ted Cruz were still battling to win the Republican presidential nomination.

The PAC later explained to the Center for Public Integrity that “Donald” is Donald Ferguson, the PAC’s political director, and “Ted” is Ted Harvey, its chairman.

Indeed, when someone calls the phone number provided in the Committee to Defend the President’s TV ad, Harvey — a former Colorado state senator — delivers a message to anyone who presses “1” that reiterates the TV ads’ themes of Democrats and journalists attacking Trump. But then, Harvey gets to the underlying point of the ad campaign: money.

“Can we count on you to make a contribution to help us support Donald Trump?” asks Harvey, who in a radio interview last year with Stephen K. Bannon — the Breitbart honcho who’s now one of Trump’s top aides — asserted that Stop Hillary PAC is “the largest right-of-center organization in the country.”

“I understand a donation is a lot to ask for,” he says. “But now is our time to stand up and support President Trump. Your support is critical in this effort … If you can make even a modest donation, please say ‘yes’ or press '1.'”

Backer declined to discuss the Stop Hillary PAC ad campaign’s scope or cost, explaining that “my client isn’t interested in sharing the details or results of its strategy at this time.”

But the ad run appears limited. Kantar Media/CMAG, a firm that tracks TV advertising, had no record of Stop Hillary PAC’s pro-Trump ad appearing on broadcast or national cable TV. That means the ads likely ran on local cable and/or satellite TV systems.

When it comes to fundraising, Stop Hillary PAC is nothing if not aggressive.

Since October, a Center for Public Integrity reporter who signed up to receive updates from Stop Hillary PAC received 126 emails from the group. Almost all of them asked for money, or featured gimmicks — polls, surveys, online “focus groups” — that led supporters to a donation page.

The incessant fundraising has worked: After raising about $1.1 million during 2013 and 2014, Stop Hillary PAC’s fundraising exploded during 2015 and 2016, generating more than $6.3 million from donors, according to federal filings.

Nearly four-fifths of that amount came from people contributing $200 or less, a Center for Public Integrity analysis of FEC data indicates.

Of those who contributed more than $200, the most common occupation listed for such donors is “retired.”

Stop Hillary PAC spent more than $6 million during 2015 and 2016 combined, according to FEC records.

But federal records likewise indicate that only about one-fourth of this amount went toward advertisements or other communications, such as robocalls, that overtly supported or opposed a political candidate.

The rest of the money went toward a variety of other expenditures, most notably fees paid to political consultants in Northern Virginia and Ohio.

Among them: Infocision, an Akron, Ohio-based telemarketing company that consumer advocates have criticized for using misleading tactics that target the elderly. (Infocision officials have defended company practices as lawful.)

The PAC also directly donated about $52,000 to a handful of Republican candidates, including $5,000 to Trump’s presidential campaign.

Stop Hillary PAC’s pro-Trump ad is a prime example of how political ads aren’t always what they seem.

What some lay viewers may interpret as a straightforward call to arms from Trump himself is really a fundraising effort for an unaffiliated political group that’s in part operated by a man who’s openly questioned Trump’s fitness for the presidency.

But Backer, who says he’s received several harassing phone calls about the ad in recent days, makes no apologies to those who feel misled or assume Trump is behind the ads.

“The ad is fully compliant with applicable law as to disclaimers, and my client can’t control the unreasonable inferences drawn by unreasonable people,” Backer said.

Chris Zubak-Skees and Michael Beckel contributed to this report.