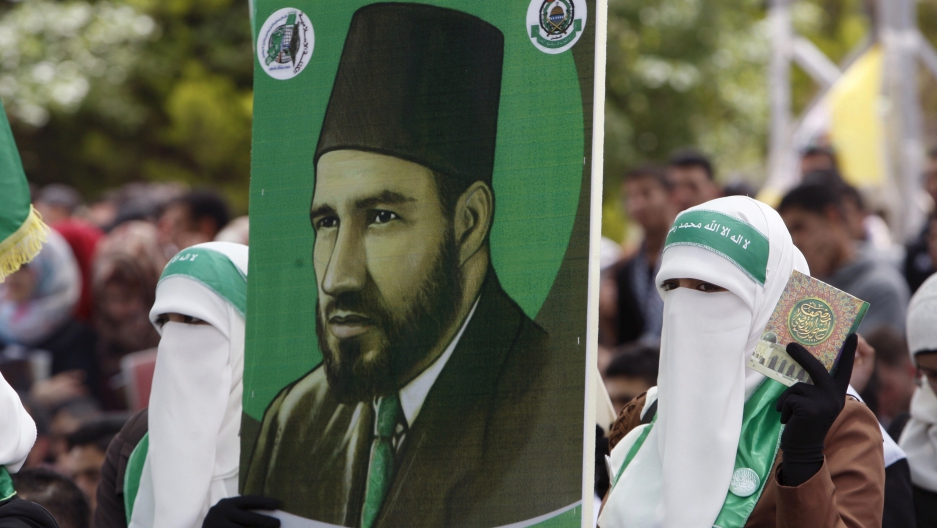 Palestinian students supporting the  militant group Hamas, an organization that's ideologically linked to the Muslim Brotherhood, hold a poster depicting Hassan Al-Banna, the Muslim Brotherhood founder, during an election campaign for students' council at Palestine Polytechnic University in the West Bank city of Hebron on April 20, 2015.

Before al-Qaeda, before ISIS, and before Boko Haram, there was the Muslim Brotherhood.

The Brotherhood emerged in Egypt in the late 1920s as a militant movement of Islamic fundamentalists seeking to overthrow the Egyptian government and establish strict Muslim rule.

In the 1970s, the Brotherhood renounced violence. But its ultimate goal has remained consistent for nearly a century.

The Muslim Brothers want to build an Islamic caliphate, which helps explain why the Brotherhood is often described as the ideological grandparent of the some of best known and most notorious Islamic extremist groups operating today.

But is the Muslim Brotherhood itself a terrorist group?

Past US administrations have looked at the organization and decided that no, it was not.

The Trump White House might be ready to do otherwise. It is considering asking the State Department to initiate an official interagency review on the designation of the Muslim Brotherhood as a foreign terrorist organization.

This couldn't happen overnight or with the stroke of Trump’s pen. But the politics of Washington today make it more likely than any time  in recent history.

There is legislation on Capitol Hill calling for the review as well. It was co-written by Republcan Sen. Ted Cruz of Texas, whose office turned down an invitation for him to speak with us.

One expert told me that there is an upside to labeling the Brotherhood a terrorist group.

Trager says the Brotherhood preaches hatred against Christians, Jews and even Muslims who don’t share its ideology. At times, some members of the group have urged their leaders to take up militancy again. Individual Muslim Brothers have also been implicated in violent attacks against the Egyptian government.

But Trager says a US government move to list the Brotherhood as foreign terrorist organization is neither simple nor straightforward. And on this point, there is broad consensus among Western experts.

“There’s something to be said for declaring it a terrorist organization,” says Dennis Ross, a longtime US diplomat on Middle East affairs. “I understand the impulse. I even understand some of the value, but I think we do have think a little bit about how it may have an impact on some of the countries that we will deal with.”

The governments of Saudi Arabia and the United Arab Emirates, both US partners, consider the Muslim Brotherhood to be a political threat and have banned the organization. In Egypt, which has received billions of dollars in US assistance, the Brotherhood has essentially been named an enemy of the state and its leadership has been subject to a ruthless government crackdown.

Since the 2013 ouster of Muslim Brotherhood leader Mohammed Morsi as Egyptian president, Trager says the Brotherhood’s entire chain of command has been broken. Most of the group’s leaders are now in prison or in exile, Trager says.

In Egypt, “[the Brotherhood] just does not appear to be a coherent organization at this time,” he says.

Trager says the idea that there is a coherent Muslim Brotherhood leadership capable of directing a global campaign of terrorist violence is not accurate. But if you indulge in some of the more pernicious anti-Muslim conspiracy theories, you could be forgiven for thinking that the Muslim Brotherhood represents a direct threat to the American homeland.

“Frankly, a group that couldn’t even control Egypt, where it’s from [and] where it was largest, for more than a year, certainly poses no risk of taking control of the United States,” Trager says.

Again, some of America’s partners in the Middle East would be delighted if Washington listed the Brotherhood as a terrorist group, especially Egyptian President Abdul Fattah al-Sisi.

But many countries in the Middle East that have good working relations with the US allow political groups affiliated with the Muslim Brotherhood to operate legally.

“That’s the case in Morocco, and that’s the case in Tunisia,” says Nathan Brown, a Middle East expert from George Washington University. “There are legal political parties in places like Jordan and Kuwait.”

Brown says the US listing the Brotherhood as a terrorist group would be taken in Egypt as a green light on some “pretty horrific human rights violations.”

But it could also backfire, he said.

Turkey is another key US ally — and a member of NATO — whose ruling Islamist party has ideological ties to the Muslim Brotherhood.

If the Brotherhood was designated as a terrorist group by the US, this would raise questions about American cooperation with people or political groups in Turkey that are connected to the party of President Recep Tayyip Erdogan.

Even the government of Israel has made a distinction between the two separate branches of the Islamic Movement, which advocates Muslim rule over the Holy Land. The more radical “Northern Branch” of the group was banned by the Israeli government in 2015, after it was accused of having close ties the Muslim Brotherhood.

But political figures from the “Southern Branch” of the Islamic Movement in Israel, which came out in support of a two-state solution for the Israel-Palestinian conflict, are still legally allowed to take part in national politics.

“If the Israelis are OK with that,” says Shadi Hamid, “perhaps the Trump administration should take its cues from Israel in that regard.” Hamid is the author of Islamic Exceptionalism: How the Struggle Over Islam Is Reshaping the World.

He says there are plenty of reasons not to like the Muslim Brothers. But Hamid points out that the effort to slap the Muslim Brotherhood with a terrorist designation could also have dire implications for the US homeland.

“This could be a smoke screen for something broader and more dangerous, which is targeting American Muslims and American Muslim organizations and using the kind of endless guilt by association that has been popular on the fringes of the far right,” Hamid says.

Imam Omar Suleiman of the Yaqeen Institute for Islamic Research in Las Colinas, Texas, says the push to list the Brotherhood as a terrorist group is an extension of Donald Trump’s campaign strategy.

“It’s continuing to pander to this idea there are secret cells of Muslims trying to take over in the country,” Suleiman says. “If we’re going to start with labeling hate groups or terrorist groups, we can start with the Ku Klux Klan.”

If there were credible evidence that the Muslim Brotherhood was indeed a global terrorist organization, says Hamid, then presumably previous American presidents would have put the group on the terrorist list.

And there’s precedent for that. Because Hamas, often described as a Palestinian offshoot of the Egyptian Muslim Brotherhood, was designated as a foreign terrorist organization about 20 years ago.