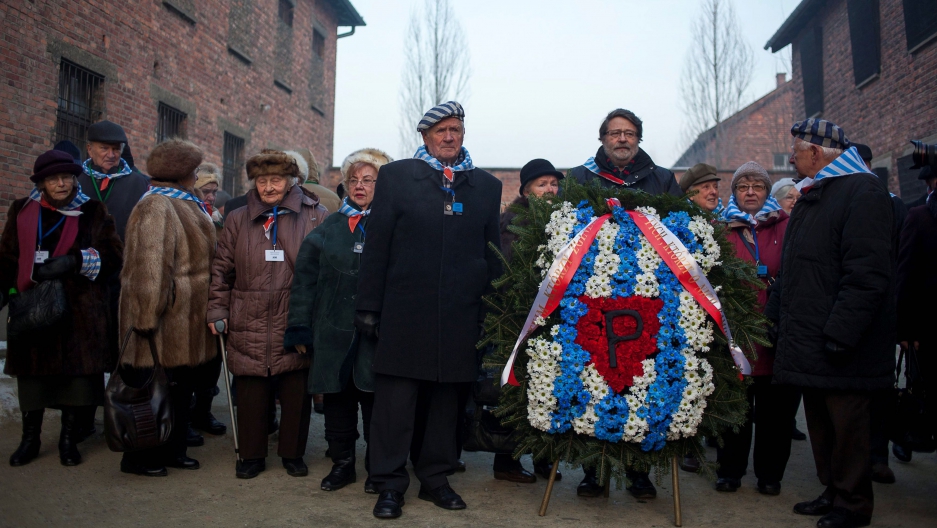 Survivors stand before laying a wreath in front of the "death wall" in the former Nazi German concentration and extermination camp Auschwitz-Birkenau in Oswiecim, Poland, on Jan. 27, 2017, to mark the 72nd anniversary of the liberation of the camp by Soviet troops and to remember the victims of the Holocaust.

Donald Trump's only been president for seven days. But as a country, we seem a long way away from Trump's swearing-in.

The new president's signed a lot of executive orders over the past few days. Not much of it's reality yet ... but a lot of it aims to undo the work of previous administrations.

If you voted for Trump, maybe you wanted this. If you didn't, maybe you're reeling.

Reeling from the news, like the construction of a wall between the US and Mexico. Trump telling the National Park Service to stop using social media. Ordering the Environmental Protection Agency to not communicate with the public. The decision to withhold federal funds from sanctuary cities. Putting undocumented immigrants and refugees on alert.

And Thursday, you may have seen this: The Bulletin of the Atomic Scientists set its "Doomsday Clock" ahead by 30 seconds. You know — the symbolic gauge of anxiety about the state of the planet. The clock now stands at two and a half minutes to midnight — the closest it's been to doomsday since the early 1950s.

And for us in the media, there was Steve Bannon, Trump's chief strategist, telling us to keep our mouths shut. Calling us "the opposition."

Again, maybe you saw the gridlock in Washington, the lack of jobs and opportunities in our country; your voice was absent, and you wanted this kind of profound shake-up.

Today, though, I was reminded of the risks of not speaking out, of heeding Bannon's order to keep my mouth shut ... of not reporting the news truthfully.

It's Holocaust Remembrance Day. It marks the liberation of the Auschwitz concentration camp. But the day isn't just about World War II. It also recognizes Rwanda, Cambodia and Darfur — other genocides.

As the Holocaust Remembrance Day's organizers say: "Genocide does not just take place on its own, it's a steady process which can begin if discrimination, racism and hatred are not checked and prevented."

The wonderful klezmer clarinet player David Krakauer saw what this looked like up close a few years ago, when he performed in Krakow, Poland, just an hour's drive from Auschwitz. A lot of curious people in the audience, ready to dance. A party that ran into the wee hours of the morning. The Jewish people who created klezmer, though? Present, yes, but just a few. More so in memory.

On The World, and in our world, it's all connected.