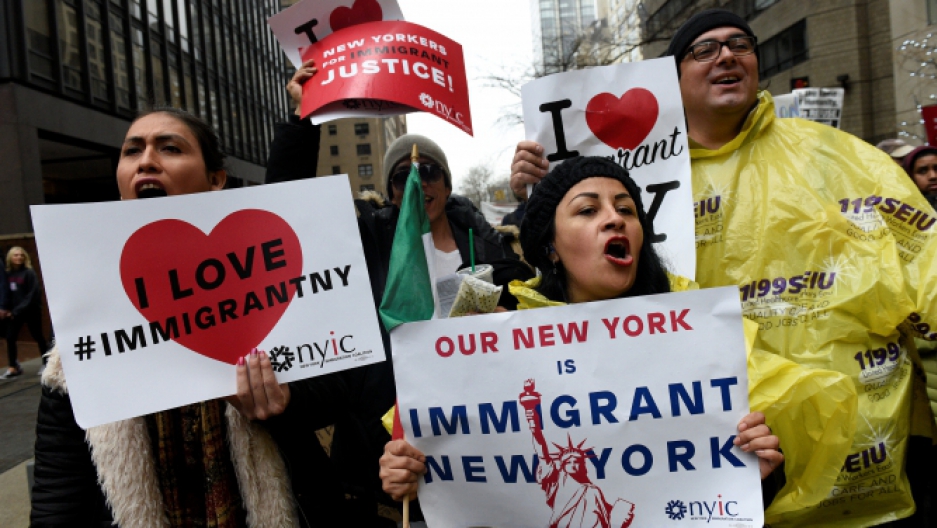 People march towards Trump Tower during a protest organized by the New York Immigration Coalition.

Remittances, or cash that gets wired, is a big deal for a lot of countries around the world — including Mexico. Just in November alone, nearly $2.4 billion in cash was sent there, mostly by Mexicans and Mexican Americans working in the US. That's the most money Mexicans have sent back in a single month in the last 10 years. And it's more income than Mexico makes off oil.

I headed over to Jackson Heights, in Queens, New York, to find out why there's been this spike in remittances. This is one of the most diverse immigrant neighborhoods in the US. One block is Ecuadorean, another Mexican, the next Colombian. Today, it’s raining. And underneath this train bridge, at a day laborer center, about a dozen immigrants gather, hoping for work — painting, cleaning, doing repairs. Anything. The mood is grim.

Inside the center, I find an organizer named Maritza Ortiz. "People are afraid, especially Mexicans," she says. "They fear that with the new Donald Trump administration, it’ll soon [be] more expensive to send money home."

That’s because they’ve heard Trump say this over and over: “I would build a great wall, and nobody builds walls like me. And I’ll build them. Very inexpensively.”

A wall dividing Mexico and the US. And Trump has said Mexico will pay for it. Mexico, of course, says it's not picking up that bill. So, Trump has suggested taxing the money immigrants send back to Mexico. That’s not likely to happen, either. Imagine this scenario: Someone would have to single out the nationality of everyone wiring money back home. (Are they Mexican? Colombian? Guatemalan?) It would be a logistical nightmare, a civil rights scandal, and it would probably face resistance from Congress.

What’s more likely to happen is that Trump will try to convince Congress to fund the wall. He's already hinted at that.

But here in Jackson Heights, people are not taking their chances.

At the center, a man named Arturo Gordillo walks in, soaked by the rain. He says he is sending more money back to Mexico now. He hopes he can get some work before noon, but he’s happy to talk to me for a while. Gordillo says it’s not just Trump’s threats prompting him to send back more cash. It’s Mexico’s struggling economy. "Gasoline prices have skyrocketed," Gordillo says.

"Everything’s getting pricier — transportation, food. In a way, that’s good for us, because a weaker Mexican peso means the US dollar is worth more." So Gordillo is wiring 200 bucks home a week — up from his usual $150. "We’re still uneasy, though," he says. "We want to know what’s next — and we need to be prepared."

Gordillo is referring to what’s also looming over many immigrants like him — the threat of deportation. Another major promise Trump has made. Manuel Castro, who runs the day laborer center, says it makes sense: "If they can secure enough money to buy a house, or maybe start a business, or a savings account in their home country, having to return will be less difficult than showing up in their home country without any money."

Basically, people are trying to get the money out while they are still here. Castro says this might backfire for the Trump administration. If no money is trickling down from the US to Latin America, more people might decide to migrate to the US.

Gordillo has not thought that far ahead. And he’s got to get going — work awaits. At least for today.