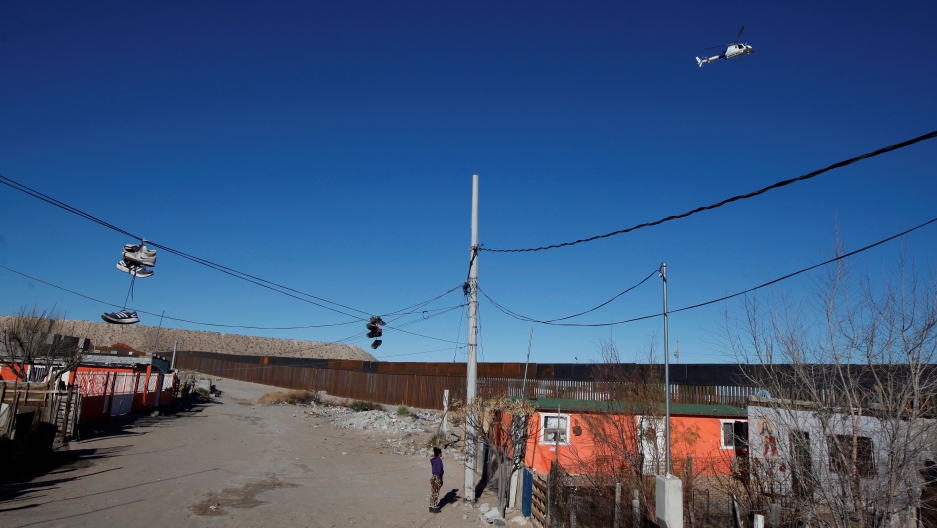 A woman stands outside her house as a Border Patrol helicopter flies over a newly built section of the U.S.-Mexico border fence at Anapra neighbourhood in Ciudad Juarez, Mexico, on Jan. 25, 2017.

US President Donald Trump took a first step toward fulfilling his pledge to "build a wall" on the Mexican border Wednesday, signing two immigration-related decrees.

Trump visited the Department of Homeland Security to approve an order to begin work to "build a large physical barrier on the southern border," according to the White House.

"We're going to once again prioritize the prosecution and deportation of illegal immigrants who have also otherwise violated our laws," he added.

Stemming immigration was a central plank of Trump's election campaign. His signature policy prescription was to build a wall across the 2,000-mile border between the United States and Mexico.

Some of the border is already fenced, but Trump says a wall is needed to stop immigrants from entering illegally from Latin America.

In 2014, there were an estimated 5.8 million unauthorized Mexican migrants in the United States, according to Pew, with fewer arriving each year before that.

Experts have voiced doubts about whether a wall would actually stem illegal immigration, or if it is worth the billions it is expected to cost.

But the policy has become a clarion call for the US right and far-right — the core of Trump's support.

Still, any action from the White House would be piecemeal, diverting only existing funds toward the project.

The Republican-controlled Congress would need to supply new money if the wall is to be anywhere near completed, and Trump's party has spent the last decade preaching fiscal prudence.

Furthermore, much of the land needed to build the wall is privately owned, implying lengthy legal proceedings, political blowback and substantial expropriation payments.

But will it work?

Trump voter Courtney Combs is an Ohio businessman and former state representative. Even though he lives thousands of miles from the border, Combs says “the wall was the number one issue for me in this campaign.”

During the decade Combs served in the Legislature, he watched drugs flood into his hometown of Hamilton, Ohio, from the Mexico border. “We have a serious problem in Ohio with heroin. It com[es] directly from Mexico across the border to Arizona, and we [can] track it directly into Butler County, Ohio.”

Combs believes that a border wall would help stem the flow of drugs and ameliorate the opioid crisis plaguing much of America.

Michael Seifert lives in Brownsville, Texas, where the border meets the Gulf of Mexico. He says Trump’s plan is “wrongheaded.” Seifert says there’s been a border fence in Brownsville since 2008 and it hasn’t kept anyone out. “You can climb over the wall in 8 seconds. They’ve got one that’s 10 feet tall in a [nearby] county. Somebody built a ladder that’s 12 feet tall.”

Seifert is also concerned about a potential increase in border guards. “Border patrol agents are allowed to stop, question, search children on their way to school. That happens. Parents on their way to work. Families on their way to doctors’ appointments. I mean we see this all the time.”

Trump again promised "100 percent" to make Mexico pay for the wall Wednesday, something the Mexican government has repeatedly said it will not do.

"Ultimately it will come out of what's happening with Mexico, we're going to be starting those negotiations relatively soon. And we will be, in a form, reimbursed by Mexico," he told ABC.

"All it is, is, we will be reimbursed at a later date from whatever transaction we'll make from Mexico."

"I'm just telling you, there will be a payment, it will be in a form, perhaps a complicated form."

"What I'm doing is good for the United States, it's also going to be good for Mexico. We want to have a very stable, very solid Mexico"

Trump aides have weighed hiking border tariffs or border transit costs as one way to "make Mexico pay." Another threat is to finance the wall by tapping into remittances that Mexican migrants send home, which last year amounted to $25 billion.

Mexican Foreign Minister Luis Videgaray and the country's economy minister are currently in Washington to prepare a visit by President Enrique Peña Nieto scheduled for Jan. 31.

"There are very clear red lines that must be drawn from the start," Economy Minister Ildefonso Guajardo told the Televisa network in Mexico just ahead of the trip.

Asked whether his country would walk away from talks if the wall and remittances are an issue, Guajardo said: "Absolutely."

Trump also wants to renegotiate the North American Free Trade Agreement with Mexico and Canada, warning last week that he would abandon the pact unless the United States gets "a fair deal."

Mexico has said it is willing to "modernize" NAFTA, which came into force in 1994 and represents $531 billion in annual trade between Mexico and the United States.
Some 80 percent of Mexico's exports go to the US market.

Trump has also floated the idea of a ban on Muslims coming to the United States.

Trump this week is set to slash the number of refugees allowed to resettle in the United States, according to the New York Times, particularly from Syria and other Muslim-majority countries.

Around 4.8 million Syrians have fled to neighboring countries alone, according to the United Nations.

An estimated 18,000 Syrians have come to the United States.

Former officials said Trump could slow the flow down by moving resources away from processing visa requests, or cutting migrant quotas and programs.

Executive orders are expected to restrict immigration and access to the United States for refugees and visa holders from Iraq, Iran, Libya, Somalia, Sudan, Syria and Yemen, according to The Washington Post.

Citizens from those countries already face large obstacles in obtaining US visas.

But the move has prompted a fierce backlash even before it was announced.

"A ban on refugees would not make America safer," said Stephen Yale-Loehr of Cornell Law. "Refugees from Syria already go through a 21-step screening process that takes 18-24 months."

"The head of the US Citizenship and Immigration Services told Congress in September 2016 that not a single act of actual terrorist violence has been committed by a refugee since 9/11."

Sarah Birnbaum contributed to this story.