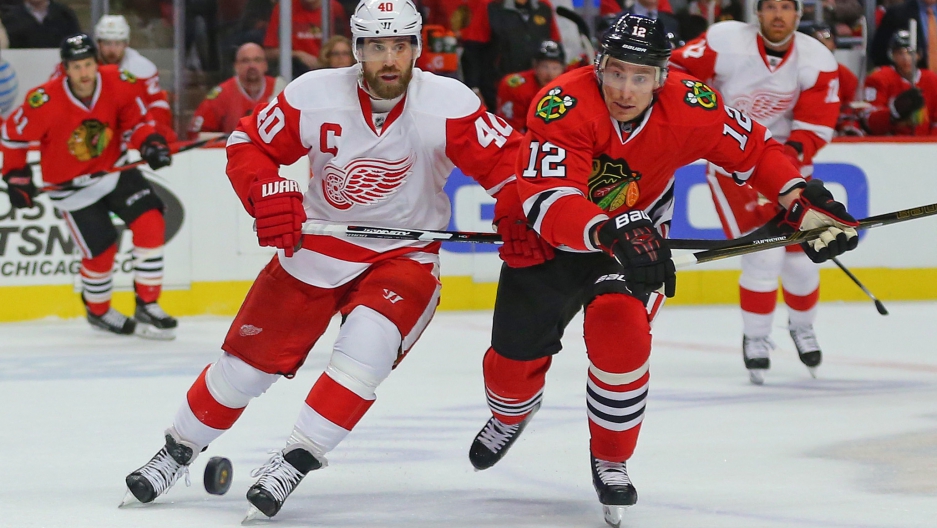 Detroit Red Wings left wing Henrik Zetterberg (40) and Chicago Blackhawks left wing Tomas Fleischmann (12) chase the puck during the first period at the United Center. This was the first Blackhawks game that had Spanish-language play-by-play.

How do you say “icing” in Spanish?

For broadcasters in Chicago who are in their first season giving play-by-play for National Hockey League games, translation isn’t always easy.

Hector Lozano is part of the three-man broadcast team that calls Chicago Blackhawks games in Spanish. He says sometimes he just uses the English words for “icing” or “face-off.” “There are some terms that just don’t translate well,” he says.

The Chicago Blackhawks are the second NHL franchise to offer Spanish-language broadcasts to its fans. The Florida Panthers began their Spanish broadcasts in 2015. It’s all part of hockey teams' growing recognition that Hispanic listeners could grow their fan bases.

Chicago talk radio station WRTO-AM first experimented with broadcasting an NHL game in Spanish back on March 6, when the Blackhawks defeated the Detroit Red Wings. The station says the response from listeners and fans was so overwhelmingly positive that in September 2016, the team and the station agreed to a 14-game Spanish-language broadcast schedule for the 2016-2017 season. So far, nine games have been aired.

When Scott Gomez became the NHL’s first Hispanic player in 1998, the Hispanic fan base at the time was practically non-existent. It’s been almost 20 years since that historic moment, but just six of the NHL’s 782 active players are of Hispanic descent, and the league is looking for better ways to market itself to Latinos.

Among those efforts? Translating games into Spanish. Which brings us back to the WRTO team and their troubles with translation.

“You try to explain everything in bits and pieces and you hope the listener sticks around for the entire broadcast,” says Matt Moreno, who also calls the games. “You try to give them a full picture or full image of what’s going on and I think it’s just a matter of hoping that the Hispanic fan has a little patience with us.”

The announcers lean on the similarities between hockey and soccer. The comparisons, they think, make it easier for Spanish-speaking fans to understand the game.

“Hockey is very similar to indoor soccer with the offsides, the five-on-five and the goal scoring,” says Lozano.

“I was ecstatic when we were able to complete the procedure to present the Blackhawks in Spanish. It was kind of overdue,” says WRTO’s executive sports producer Carlos Mendez.

Other NHL markets with large Hispanic populations such as New York, Los Angeles and San Jose have yet to broadcast in Spanish, but Mendez believes it’s only a matter of time before they do.

“I think it’s going to happen eventually. I think that collectively the NHL needs to put the marketing behind it to globalize the game more,” he says.

Eduardo Martinez, 27, says he’s been a Blackhawks fan for the last five years. He believes the Blackhawks and WRTO are providing a vital service.

“The Blackhawks needed a Spanish broadcast because not every Spanish-speaking fan speaks and fully understands English. There are so many Latinos in the city and surrounding suburbs — this was a move that had to happen. American sports becoming more diverse reflects the demographics of the country,” he adds.

According to the US census, 28 percent of Chicago’s population is Hispanic.

“For a long time, hockey was only on cable TV and wasn’t easily understood. I think this offers a branch of communication that wasn’t available to me as a youth and can make new fans of both hockey and the Blackhawks,” says lifelong Blackhawks fan Gabriel Mendoza. 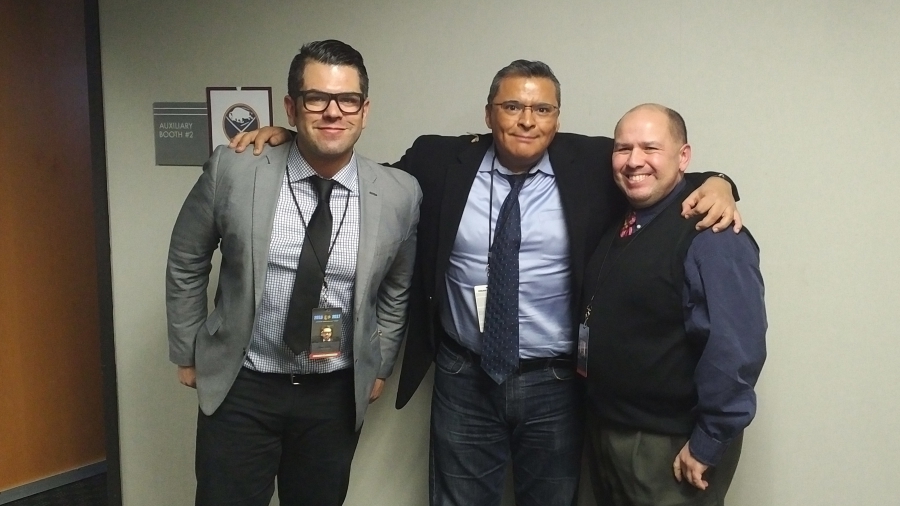 Omar Ramos, the third member of the WRTO broadcast team has done play-by-play for baseball, basketball and football. Even for him, though, hockey wasn’t on his radar until recently.

Ramos also says there is potential hockey talent in Mexico that has yet to be discovered by the NHL.

“If the league does their homework, they’ll start bringing players in from other parts of the world like Mexico. There are leagues that are developing over there. And I think that if they can start bringing in those international players from south of the border, that can help the NHL have a stronger presence with Hispanics.”