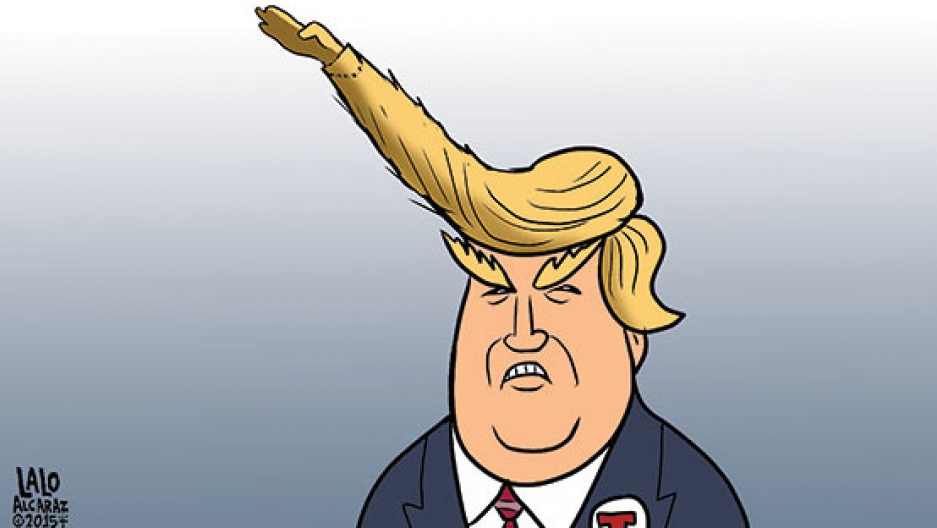 Chicano artist Lalo Alcaraz is an unabashed progressive, and his cartoons stick it to President Donald Trump, who is currently the focus of his work.

"In this time of alternative facts and reality, we have to be blunt with the truth and show it," he says.

When asked if his cartoons are too didactic, that perhaps they're preaching to the choir, Alcaraz says he's not sure: "I feel like I'm a banner for the choir to hold into battle. I'm making messages and also allowing people to discuss these issues with a better grasp, I think, I hope, trying to promote a little critical thinking."

But at a time like this, when millions of Americans are deeply concerned about President Trump and millions of others are confident that he's the right guy for the job, does a satirist have a different role — to try to bridge the divide?

It's unclear, even to Alcaraz. He's had some experience with Trump supporters reacting to his work, mostly in negative ways. But he says that's par for the course. "I get a lot of hate mail," he says. 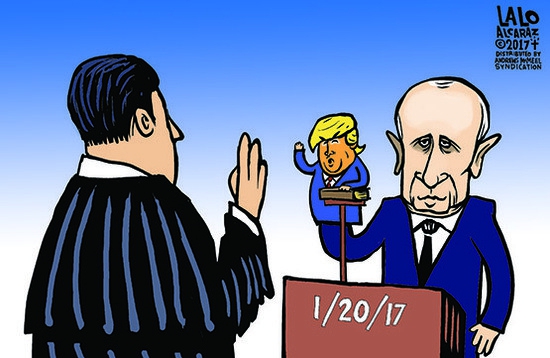 During the heat of the campaign this fall, a guy on Twitter messaged Alcaraz and told him he couldn't wait for the cartoonist to be deported. "I'm like, 'I'm a US citizen and you're a 37-year-old white guy from Ohio, but I'm 52, so I've been here in this country longer than you have.'"

After Trump won, the man got in touch with Alcaraz again. "He didn't apologize but he said, 'I'm going to take the high road,' which I guess means he's not going to say nasty things to me."

Alcaraz is cautiously optimistic that he can reach people like that, who, traditionally, don't have the same politics. "I think there is a little crack in the door where you can have dialogue but not when it's my rights that are meant to be snuffed out," he says.

The power of simple, visual messages

Alcaraz is a strong believer in laughing during hard times. And that's where satire comes in. Coping with humor is something he learned from his Mexican parents. "It's kind of the Mexican national pastime. I was just telling my Uber driver that the US has become Mexico. That's why we all have 10 jobs, and maybe we've entered that kind of 'bad hombre' dictatorship era that's also a hallmark of Latin American countries," he says, only half-joking. 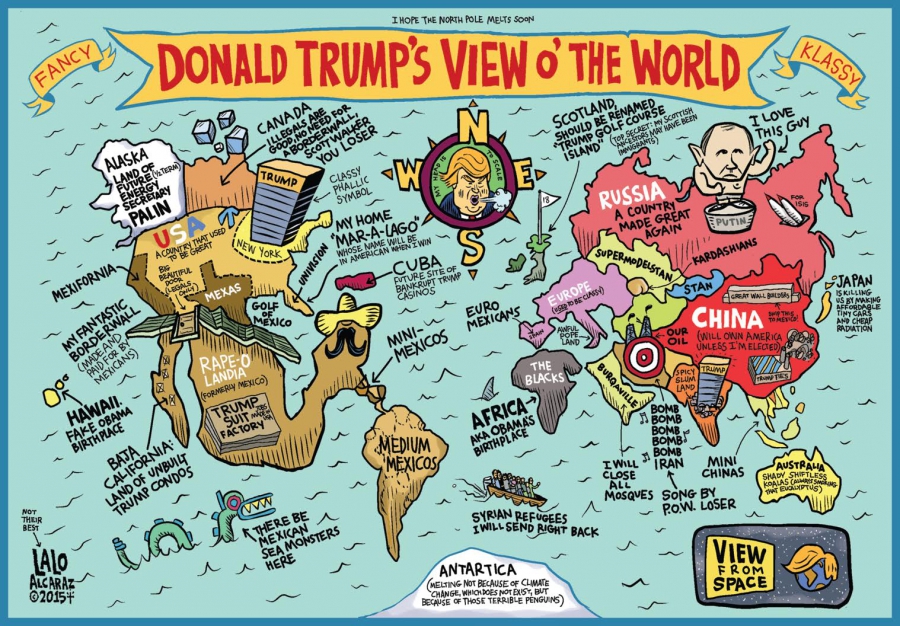 Back in graduate school, Alcaraz used to think architecture was going to save the world. But then he got a taste of the power of simple, visual messages. He met other Chicanos who were studying at Berkeley and ended up joining with them to make art, protest and perform. He then abandoned architecture for cartooning. "I saw how effective it was to create a message wrapped in satire and humor," he says.

These days, many conservatives criticize liberals and progressives like Alcaraz for embracing identity politics to a fault, accusing them of sowing divisions instead of bridging them.

Alcaraz has a blunt rejoinder to that: "I grew up not seeing myself in the media, and I think that's why I became someone who makes images of Latinos on TV and in my cartoons. I just think it's important. I have little brown kids, and I want them to feel OK about themselves and not believe the nasty propaganda."

You can watch Lalo Alcaraz speaking with The World's Carol Hills in the studio in our Facebook Live recording.