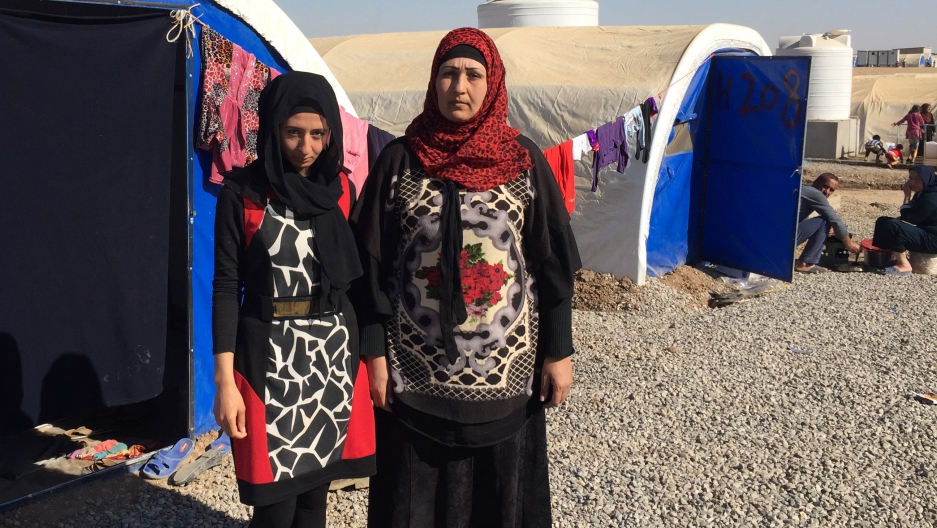 Zikra Younis, right, and her daughter Huda at the Khazer camp for displaced people. The camp is east of the Iraqi city of Mosul, where they escaped from last November.

In the week Zikra Younis escaped from the ISIS-held city of Mosul, she was liberated twice.

She left behind the authoritarian rule of ISIS. And she also left an overbearing husband who she says had held her back for nearly two decades.

“I told him that I stayed with you all these years, I always do as you please, but you’ve gotten us to a bad point,” she says.

“I want to change my life and the life of my children. He chose a path and I chose another.”

Zikra and her six children are one of the many thousands of families who have escaped Mosul in the face of an ongoing offensive by the Iraqi army to retake the city.

More than 3 million Iraqis have been displaced by violence since 2014, when ISIS captured parts of the country and sent people fleeing for their lives. About 1 million of those displaced are taking shelter in temporary settlements.

After fleeing in mid-November, Zikra and her children have been living in the government-run Khazer camp, east of Mosul. Like many others, they’re in limbo and face the daunting task of planning a life in a war zone.

It’s a measure of her strength that she left her husband at what was perhaps her most desperate moment — when she had just arrived at the camp, filled with uncertainty.

But she says it was a long time coming.

“When I married [my husband], he was someone that was very traditional. He was a little ignorant. He didn’t give me my freedom,” she says, surrounded by her children.

“Every time I tried to get a job my husband would object. I had ambitions to work. I used to always say that I didn’t want to sit between four walls.”

Zikra was born and raised in Mosul. She has watched history unfold before her in the city, from the US invasion of Iraq in 2003 to the grip of ISIS.

She also remembers a much calmer time, when she would play in the park with her father.

“We have some good memories in Mosul,” she says. “Before, it was beautiful, safe and calm. There were Kurds and Christians, we were all brothers and sisters. There was no difference between us.”

Also in this series: ISIS forced this Iraqi teacher to change all his lessons — 'it became all about death'

Today, at 43, she is confident and straight-talking, but wears a weary expression.

She grew up in a conservative Sunni Muslim society, among people who had a certain idea about the role a woman should play. She always fought against that idea.

“I wasn’t just a normal girl or woman, I am smarter than that. When I was 14 years old I was already driving a trailer truck.”

“I always liked my freedom and my independence. I had ambitions.”

An Iraqi man who fled the Islamic State stronghold of Mosul at the Khazer camp for displaced people, on Nov. 23.

As she tells it, life got in the way of her realizing those ambitions. She got married in 1997, when she was 23. Her husband was a mechanic. She had her first child three years later, a girl named Huda.

Huda Feras Abdul Qader has lived only three years of her life without knowing war. In 2003, US soldiers arrived in Iraq to topple Saddam Hussein. After the US disbanded the former Iraqi leader’s army later that year, an insurgency against the US occupation exploded.

The Islamic State in Iraq — the precursor to ISIS — was born. Mosul was a hotbed of militant activity. In one infamous battle in November 2004, four US servicemen and 116 members of the Iraqi security forces were killed in the city. Seventy-one militants were also killed.

Over the next 13 years, Zikra had five more children. She stayed at home to look after the kids, but her ambition never left her. At age 40, she decided to chase a long-held dream of becoming a reporter.

Zikra approached the situation in a methodical manner. She practiced at home.

“I trained myself for six months for reading news and using my voice properly. I really worked hard,” she says.

She asked a local radio station to try her out.

“They heard my voice and then tested me,” she says. “The director of the station said that my voice was beautiful.”

Zikra landed a job with the station in 2014. Her husband did not approve.

“At first he accepted it. But then he was like: ‘Wait no, because now you’ll have to go out.’ He prefers when I stay home. In his view, women should work at home, have babies and that’s it.”

Zikra Younis and her children at the Khazer camp, east of Mosul.

Even after she had raised their six children, putting aside her career ambitions until 40, her husband still forbade her to work.

“I don’t know whether he was jealous or what, he used to tell me that I wasn’t allowed to.”

Zikra fought with her husband. She stayed on at the radio station, reporting on traffic, festivals and goings-on around town. Then, in the summer of 2014, ISIS came, and being a journalist wasn’t safe anymore.

“My dream didn’t come true. After that ISIS came and shut everything down,” she says.

She had been in her job for a couple of months. It was heartbreaking for her.

“Before, we were living in freedom, we had hope in life, it was nice. We would wear whatever we wanted, we could come and go as we please. When ISIS came our lives changed, it kept going from bad to worse. During the last weeks we wouldn’t get out of the house at all,” she says.

Zikra’s first daughter, Huda, is 16 now. She has her mother’s confidence and talks in the same collected manner. School was her favorite thing in the world until the extremist militants took over.

“When ISIS came, they allowed us to go to school at first. But the dress code was black and long. Even the eyes should be hidden. They would always come to the school. It was scary, so then we left,” Huda says.

“They switched our science-based curriculums to the ISIS curriculum. It was all about murder.”

When the Iraqi army finally arrived on Mosul’s eastern edge in early November last year, Zikra and her family were living in al-Samah, a neighborhood on the front line.

“There were really heavy clashes. The children were scared. I would put the kids to sleep, I would tell them, don’t be scared, I’m sitting right here keeping you safe,” Zikra says.

Then they made their escape.

“We left between the bullets. They were shooting from all angles, the clashes were very violent. We went from death to death, it was a big risk.”

She had finally made it out. But something changed in Zikra during this time. She had been denied a shot at life by her circumstances, and now she saw the same happening to her daughter.

After the family finally managed to escape the clutches of ISIS, her husband said that they should go back to their home in Mosul. Zikra refused. She says she will never go back.

Today, sitting in her tent in the Khazer camp, Zikra is weighed down by the fear that her children will have a worse life than her. That things are going backward. Her first and only concern, aside from keeping the tent warm enough, is to minimize the impact this conflict has on them.

“When I was young everything was offered to me,” Zikra says. “But Huda didn’t have that, she didn’t live a life. I lived a lot better than her when I was her age.”

Zikra doesn’t know when she’ll be able to leave the camp. She has no means to provide for her family other than the aid they’re receiving. This winter will be a long one. But she is no one’s prisoner anymore.

By the numbers: Women’s issues in Iraq and the Middle East

This is the first part of the series Iraq Interrupted: stories of survival from Iraqi men and women who have struggled and persevered through more than a decade of conflict. Also, in this series, here's a profile of an Iraqi school teacher who was forced to keep teaching but with ISIS' curriculum.