A military aide carrying a briefcase containing nuclear codes follows President Barack Obama on the South Lawn of the White House in Washington DC before his departure to Miami, on Oct. 20, 2016.

On Capitol Hill, government officials are clearing out their desks. New ones are moving in. And President Donald Trump has been handed the keys to the country's nuclear arsenal.

But despite all the change anticipated in Washington under the Trump administration, we should probably expect continuity when it comes to nuclear arms, says Ambassador Adam Scheinman, who has served as the State Department's special representative to the president for nuclear nonproliferation since 2014.

US nuclear weapons policies don’t usually change that much, according to Scheinman, even across presidential administrations. “You see much more consistency over time than you do difference,” he said in a recent interview at the State Department. “In fact, I’d say there aren’t huge disagreements between political parties on how we deal with these issues.”

The ambassador’s knowledge of nuclear policy doesn’t just come from his own career, which has included nuclear security positions at the White House and the Department of Energy. It also comes from his youth.

“Nuclear was at our dinner table,” he said. His father, Lawrence Scheinman, was an expert on nuclear issues who once worked for the Clinton administration. “My dad’s a workaholic, and the work never left him.”

As a young man, Adam Scheinman didn’t expect to follow in his father’s footsteps. But one summer, he helped his dad research a book on the International Atomic Energy Agency. Then, as a student at Cornell, the younger Scheinman heard lectures from scientists like Hans Bethe and Carl Sagan. He learned about the “nuclear winter” that could result from nuclear war. 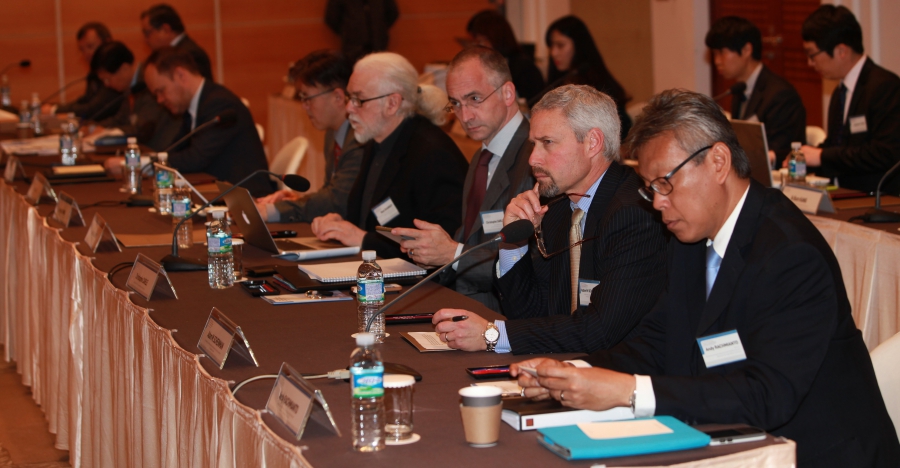 Adam Scheinman (second from right) participates in a conference on South Korea’s Jeju Island on Dec. 4, 2014.

Scheinman’s career started to zigzag toward nuclear issues after the Berlin Wall fell in 1989. “I was in graduate school, studying Soviet foreign policy,” he recalled with a laugh. When the Soviet Union disintegrated, everything changed. “All of the textbooks that we were reading had to be set aside.”

It was a good time to start working in nuclear nonproliferation. “The government and the outside community were very hopeful that we could ramp down our nuclear arsenals,” Scheiman remembered. The 1990s ushered in an era of US-Russia cooperation. The two countries dramatically reduced the nuclear arsenals that had grown so large during the cold war.

“For a period of time, there was reason to be hopeful,” Scheinman said. “But of course, history intervened. It doesn’t look as hopeful today.” Although nuclear arsenals on both sides have gotten a lot smaller, the US still stockpiles about 4,500 warheads. Since Russian actions in Crimea and Ukraine, relations with the US have been strained.

Trump is inheriting plenty of unfinished business from the Obama administration. Scheinman hopes that the controversial Iran nuclear agreement will remain intact, and that North Korea’s expanding nuclear weapons program will be capped or rolled back. Meanwhile, the Comprehensive Nuclear-Test-Ban Treaty still hasn’t been ratified by Congress.

Scheinman noted several signs of progress, from dramatic reductions in the nuclear stockpiles of the Cold War to well-attended nonproliferation summits hosted by Obama. But he also emphasized that nuclear issues often take decades to resolve. “Nonproliferation is a soap opera,” Scheinman said. “You can step away for 10 years, and come back in, and you’re dealing with the same countries, and the same set of problems.”

He’s not sure when, if ever, the soap opera will finally end. For many experts on nonproliferation, the goal is simple: a world without nuclear weapons, also known as “Global Zero.”

“I don’t think we’ll achieve Global Zero in my generation, or even the next,” Scheinman said. “I think it’s right to have that as a vision, but the process of getting there is enormously challenging. And it’s going to require political change in the world.”