Estimating crowd size is always tricky, so we let photographs taken at both Barack Obama's and Donald Trump's inauguration ceremonies do the comparison.

Views from the stage don't show much difference. Let's take a look from the top. Aerial images clearly show the stark contrast. The photograph on the right was taken at 11:35:54 a.m. on Friday, about 30 minutes before the inaugural ceremony began.

If you wonder whether the crowd grew bigger during that 30 minutes, it doesn't appear to change that much. Below is another photograph taken at 12:01:18 p.m. when Trump was taking his oath. We used the photograph taken earlier for comparison as it shows a wider area. 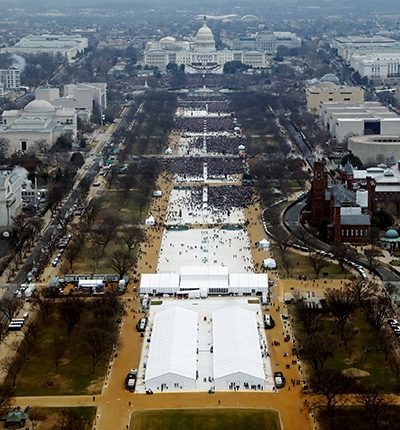 Photo taken at the National Mall shows the crowd attending the inauguration ceremony to swear in US President Donald Trump at 12:01pm.

Now we move a little closer.

During Obama's inauguration, the area around the statue of former US President Ulysses S. Grant was full of attendees.

UPDATE: A previous version of this story did not state the time when the aerial photograph of Trump's inauguration was taken. The time, which is 11:35:54 a.m. has since been added. Another aerial photograph taken at 12:01:18 p.m. has also been added for reference.